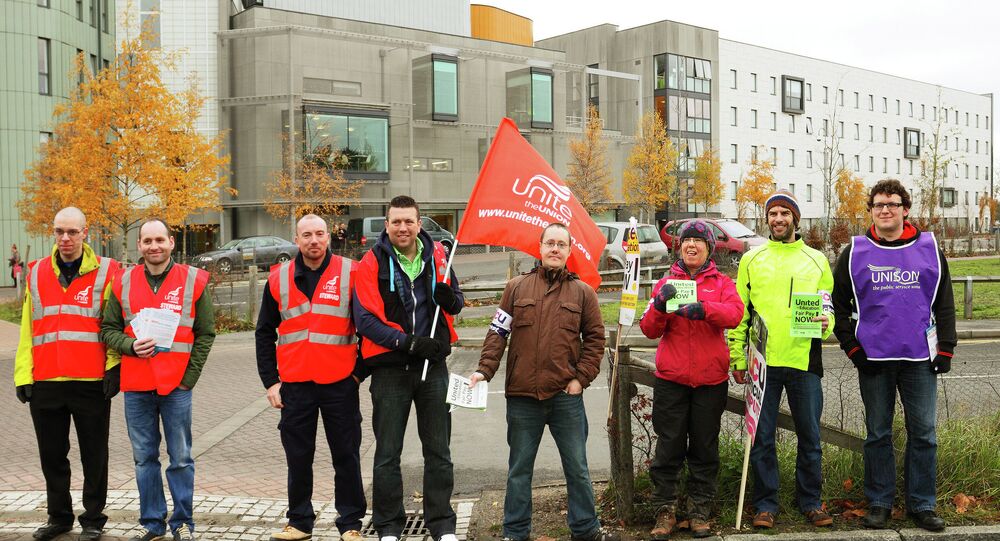 'I'm a Trade Unionist, Not a Terrorist': UK in Workers' Union Spying Row

The British government, along with large multinational corporations, are trying to wash away the rights of workers and create a culture of fear among the country's workforce through a series of systematic spying and blacklisting campaigns, a former blacklisted worker has told Sputnik.

As the government tries to usher through a new Trade Union Bill, described by critics as one of the most oppressive in the Western world, multinational corporations have been accused of taking part in extensive spying and intimidation tactics aimed at effectively locking vocal workers' rights campaigners out of their professions.

@FrankPasquale For most people the harms of workplace surveillance are much greater than those of goverment surveillance. #blacklisting

The controversial bill has drawn the ire of trade unionists all over the country, with officials particularly angered by proposals which would require 50 percent of members to vote in favor of taking strike action for an event to be considered legal.

© Flickr / iDJ Photography
UK's Guide to Workers' Strikes: Armbands, Forms and the Police
There are also fears that fines of up to £20,000 may be issued for unions whose members don't wear identifying armbands during pickets.

Conservative business secretary Sajid Javid said the proposals would stop workers making "endless threats" at the expense of "hardworking people," while union officials have seen it as an attack on trade unions and workers' rights.

"The Tory government at the moment are trying to introduce the new Trade Union Bill, which even some Conservative MPs have said is the most restrictive legislation for trade unions in the whole of western Europe," Dave Smith, former trade union representative and member of the Blacklist Support Group told Sputnik.

"The British government is never neutral when it comes to disputes between trade unions — it's always on the side of big business."

Some aspects of the Conservative's bill even raised eyebrows with Tory MP David Davis saying some of the aspects resembled oppressive measures implemented by former Spanish dictator Francisco Franco.

"I agree with most of the Trade Union Bill. I think it's very sensible… but there are bits of it which look OTT, like requiring pickets to give their names to the police force," Davis told the Guardian.

"What is this? This isn't Franco's Britain, this is Queen Elizabeth II's Britain."

'Spying and Blacklisting Still in Practice'

On top of the government proposals for trade unions, Dave Smith raised concerns over historical spying and intimidation tactics, which over the years has seen many trade union representatives placed on a blacklist, shared and used by multinational corporations to effectively lock some workers out of employment.

It was also revealed that undercover police units took part in spying and intelligence, gathering exercises on a number of unions and various members over the space of 40 years in order to identify leading figures in the movement and place them on employment blacklists.

While officially such practices are illegal, Dave Smith told Sputnik that he believes "there is no question about it whatsoever" that spying and blacklisting is still going on.

"They [large companies] were lying to everyone and lying to parliament for forty years, so why should we believe them now?"

Mr Smith, who is the co-author of the book, 'Blacklisted: the Secret War between Big Business and Union Activists', said he was first placed on a blacklist in the early nineties merely for campaigning over unpaid wage disputes and raising health and safety concerns in the construction industry.

"What they used to do, is as well as keeping files on you, every time you applied to work on a big building site, the big multinationals would check to see if your name was listed or not. And if you were on the black list you were just sacked or you weren't offered a job."

Despite being a qualified engineer, Smith said he was eventually forced to change professions to help pay his mortgage, because he couldn't manage to find employment, even during the UK's building boom of the late '90s — early 2000s.

He said the practice of placing some workers on an industry blacklist was endemic in Britain, and affected thousands of workers over the years — in some cases, ruining people's lives.

"I've seen people whose blacklist files have got entries from the 1960s. This isn't just one or two rogue managers having a quiet word with each other in a pub spreading a bit of gossip about you — this is systematic."

Mr Smith said that such practices, which he believes are to a degree still in operation today, created an environment of fear, where workers are now hesitant to stand up for their rights amid attacks from David Cameron's Conservatives.

"The whole purpose was not only to victimize the activists but to discourage anyone else from standing up for their rights as well. It's to scare everybody else and create that climate of fear."

UK's Guide to Workers' Strikes: Armbands, Forms and the Police