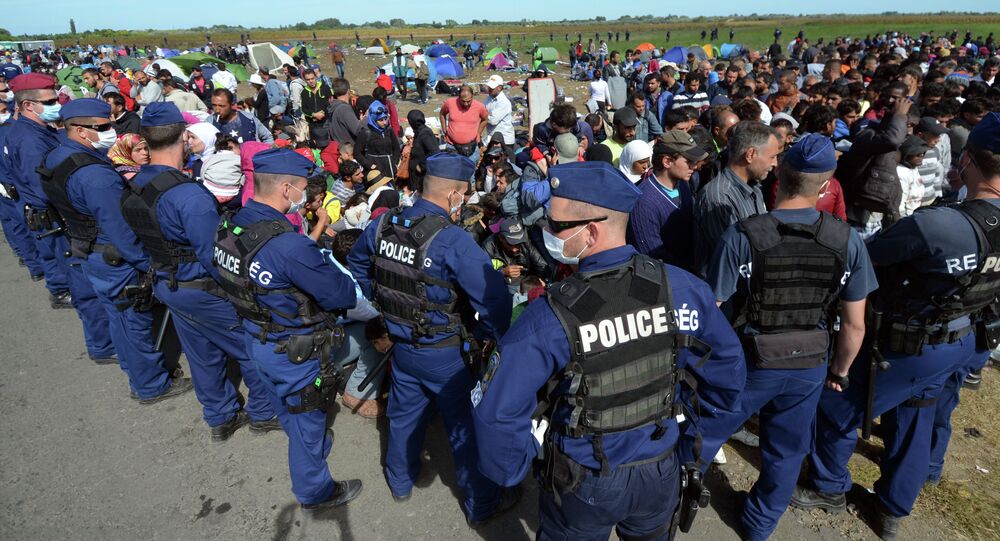 Hundreds of refugees set up a camp on the border between Serbia and Hungary without any authorization.

"We are scared to enter Hungary because there is police there – we will get registered and sent to a camp. Then we will stay in Hungary, while most of us would like to go to Germany," a refugee told RIA Novosti.

Around 3,000 migrants came to the Hungary-Serbia border on Tuesday. Most of them said they headed to camps organized by the Hungarian authorities, while several hundred tried to walk to Budapest, but the police did not allow them to do so.

"We shall look for ways to bypass the police. We do not want to register and stay in Hungary. I, for example, would like to get to England," a Syrian refugee told RIA Novosti.

Hungary is one of several EU countries reeling from the rapidly escalating migrant crisis, as hundreds of thousands of people flee their homelands in the Middle East, North and Sub-Saharan Africa in the hope of finding refuge in the European Union.

© AP Photo / Lai Seng Sin
Australia to Take in 12,000 Syrian Refugees
Budapest estimates that over 156,000 migrants have illegally entered the country since the beginning of 2015 attempting to travel further within the European Union to reach richer countries and apply for asylum there.

As the EU’s largest economy, Germany has agreed to accept large numbers of refugees – mostly from Syria, Afghanistan and Eritrea – that the European Commission plans to relocate among the EU member-states according to a quota system.

Some 80 Football Clubs to Donate $1.1 Per Ticket Sold to Help Refugees

EU to Announce Proposal on Resettlement of 120,000 Refugees on Wednesday