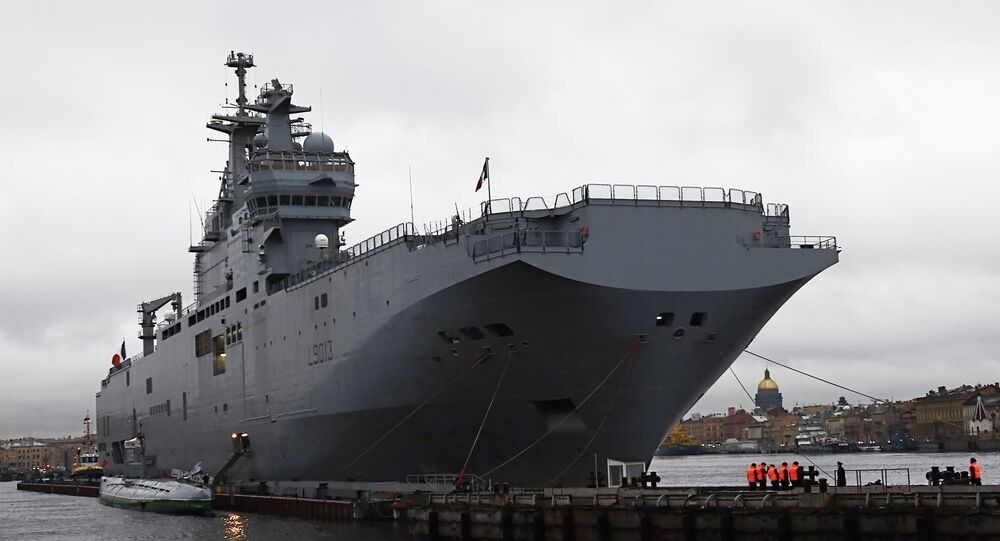 If French President Francois Hollande fails to secure the Mistral deal with Russia, he will have to explain the decision in front of the entire French nation, Thierry Mariani and Nicolas Dupont-Aignan, members of the French Union for a Popular Movement party, said in an official letter addressed to Hollande, according to Atlantico website.

Currently, the fate of the two Mistral-class helicopter carriers, Vladivostok and Sevastopol, remains in limbo. Earlier this week, it was reported that Russia and France had reached a final agreement to scrap the Mistral deal, according to which Paris would have to pay back $1.36 billion. However, Hollande was quick to dismiss the reports, stating that the agreement is yet to be finalized.

Mariani and Dupont-Aignan, criticized Hollande's foreign policy, describing it as inconsistent and dependent on Washington.

"If you [Hollande] choose not to deliver these ships [Mistrals] to Russia, you will have to explain the French public why France would lose over a billion euros directly and even more indirectly, despite the fact that EU sanctions don't affect the contract," Mariani said, according to Atlantico.

© Sputnik / Grigoriy Sisoev
Hollande Denies Finalizing Mistral Deal Termination With Russia
The president will also have to explain how the cancelation of the contract had to do with the Ukrainian conflict.

"The ships won't absolutely change the balance of power — whether they're delivered or not. It won't have a slightest effect on the position of the Russian diplomacy [towards the Ukrainian crisis]. Everyone understands now that it's Kiev that's blocking the implementation of the Minsk peace agreements," the official letter addressed to Hollande said.

The French politicians also said that the Mistral deal will save thousands of jobs at St. Nazaire, where the Mistrals were built, and will allow France to become the largest partner of Russia in the industrial sector, bringing France billions of euros.

© Sputnik / Alexey Danichev
It's Over: Russia, France Agree Mistral Contract Breach Settlement
France's international reputation will also depend on the Mistral deal. It will show the world whether France is a great nation that makes its own decisions and keeps its promises, Mariani and Dupont-Aignan said.

In 2011, Russia and France inked a deal for the delivery of two Mistral-class helicopter carriers, currently docked in the French naval shipyard of Saint-Nazaire and costing French taxpayers up to $5.5 million in maintenance per month.

The deliveries were put on hold in late 2014 over Moscow's alleged involvement in the Ukrainian civil war. The Kremlin has repeatedly said Russia is not a party to the deadly conflict and pushed for peace in the war-torn nation.