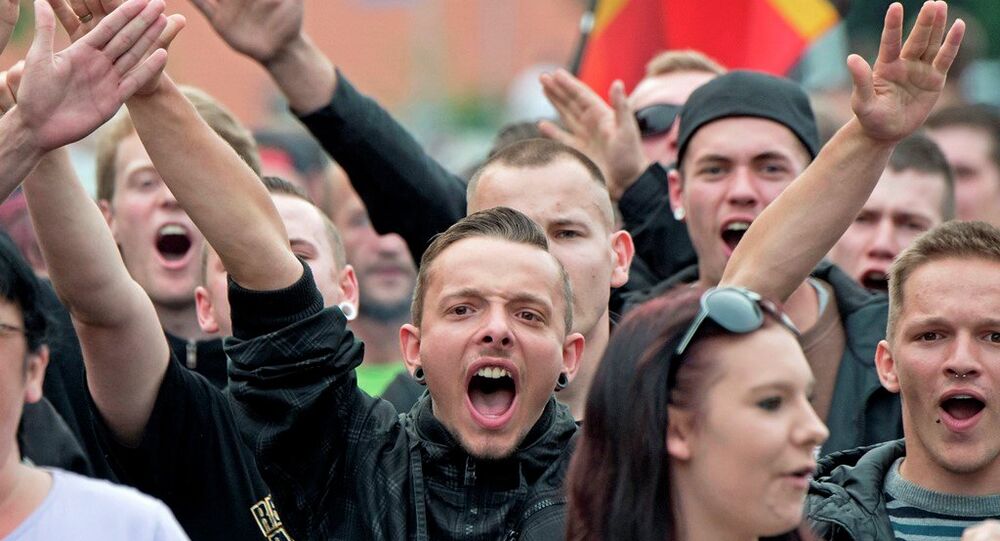 There is growing concern about the level of anti-refugee sentiment in Germany after a series of attacks over the weekend highlighted a worrying trend of increased violence towards asylum seekers, with reports of bashings, houses being set alight and even a car bomb explosion.

© Sputnik / Vitaly Belousov
Merkel Faces Online Outrage After Driving Palestinian Refugee Girl to Tears
One of the most shocking incidents was seen in Brandenburg an der Havel on Saturday, when a family of asylum seekers with children aged two and five years old woke to find a fire in their apartment, after someone had doused a newspaper in fire accelerant and thrown it inside their flat, in what's thought to have been a targeted attack.

Similar scenes of violence and intimidation were also witnessed in Dresden, when a group of 27 people attacked a refugee home with stones, while four Syrian asylum seekers were bashed by a group of men in Thuringia, with investigators not ruling out that xenophobia may have played a part in the assault.

These instances of violence were topped off on Monday by a car bomb explosion that blew up the vehicle of prominent Left Party politician Michael Richter.

No one was hurt in the incident as Richter was sleeping in his house when the bomb exploded just after midnight local time, however it has raised concerns about the danger of radical elements within German society.

"I have organized the pro-asylum seeker events in the town," he said. "I'm right at the top of the hit list," Richter added, saying that he believed the far right were responsible for the attack.

Attacks on Asylum Seekers Have Tripled

The weekend's incidents have merely served as a timely reminder to what has been happening for the majority of 2015 in some parts of Germany.

During the first six months of the year, the German Interior Ministry recorded 173 incidents of right-wing criminal violence against asylum seeker accommodations — three times as many incidents as the same time last year.

#Merkel, if #Germany can’t cope with refugees maybe you should see how these countries cope? http://t.co/UHrpFDlvBz … pic.twitter.com/n0CnH9D8qk

The statistics indicate that attacks on asylum seekers are occurring on a daily basis, however refugee support groups say the real number of violent incidents is much higher, as many foreigners are afraid to report their experiences to police.

While the majority of Germans are generally regarded to be among the most sympathetic in Europe and supportive towards asylum seekers, there are major concerns about various extremist groups operating within the country, amid fears they may be increasing in popularity.

Officials have stated that various far right groups and neo-Nazi supporters have been responsible for the race-related attacks, while groups such as Pegida and Germany's National Democratic Party (NPD) have also gained support through a strong anti-immigration message.

The increase in attacks on refugees and the rise in anti-immigration rhetoric has led many within the German media to ask whether the racist elements of the country's past are experiencing a revival of sorts, with newspaper Der Spiegel posing the question:

"Has the 'ugly Germany' returned?"