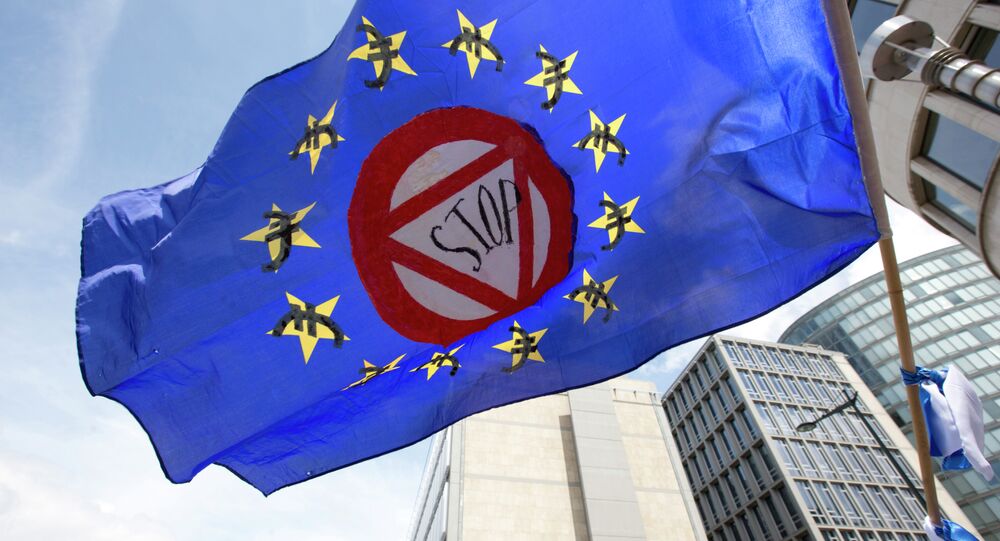 The Finnish parliament has reportedly signaled its unwillingness to accept any new bailout deal for Athens amid efforts by the eurozone's finance ministers to resolve the Greek gridlock.

© AFP 2020 / ARIS MESSINIS
The Euro is Dead, Open Your Eyes – German Politician
According to the Finnish public broadcaster Yle, the second most numerous party in Finland's parliament has debated pushing for a so-called "Grexit" as the Finns Party, saying that they will try to bring down the government if it backs another rescue deal for Greece.

Finland’s parliamentary system stipulates that an appointed group of MPs, the country’s 25-strong "grand committee", is in charge of granting the government the mandate to negotiate an aid deal for Greece; the bailout was high on the agenda of Saturday's meeting of the committee in Helsinki.

For his part, Finnish Finance Minister Alexander Stubb, who attended the ongoing eurozone talks in Brussels on Saturday, said that "the mandate is not public and the Finnish delegation will not discuss it publicly."

The Brussels talks are set to resume later this day after the eurozone ministers failed to clinch an agreement on Saturday.

Speculation is rife that the northern and eastern European countries may finally reject a new reform plan, which was proposed by Greece in exchange for another bailout package.

© AFP 2020 / ARIS MESSINIS
Trust Issues: Athens Believes Certain Countries Wary of Lending to Greece
As for the eurosceptic Finns Party, its leader Timo Soini has more than once called for the "Grexit", which he said could be the most suitable decision for Greece.

During the Saturday gathering, the eurozone ministers planned to reach a consensus on Greek Prime Minister Alexis Tsipras’s proposals for a third rescue package in the run-up to a crucial EU summit scheduled for Sunday.

Meanwhile, the German Finance Ministry has touted a temporary Grexit plan, which envisages Greece leaving the eurozone for five years in the event that it fails to improve its new bailout offer.

Eurogroup Session Over Greece on Pause, to Continue on Sunday