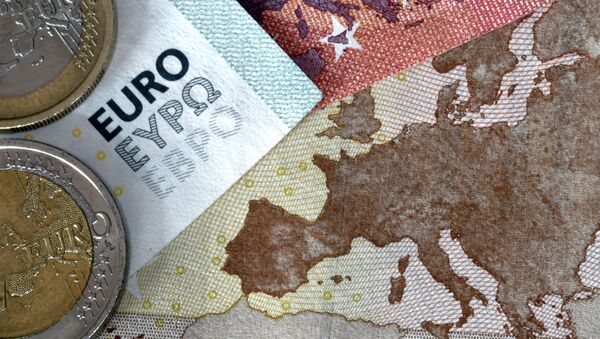 © AFP 2023 / ARIS MESSINIS
Subscribe
International
India
Africa
Prominent German politician Oskar Lafontaine has called for the abandonment of the single European currency, in an interview with the Der Spiegel magazine.

If Euro Fails, Europe Fails: Merkel Urges Compromise as Greek Default Looms
In an interview with the Der Spiegel magazine, the former chairman of Germany's Social Democratic Party, Oskar Lafontaine, has called for the abandonment of the single European currency.

According to him, the biggest mistake in creating a single currency union was the fact that the process was not preceded by the formation of a new political association.

"The euro has already collapsed, we should not cherish illusions," Lafontaine said, calling the single European currency "a step backward in the framework of the historic project of European integration."

He added that the euro cannot function "without a European economic government," and that the unemployment, imposed by the German government, "cannot become the basis for European unity."

Grexit From Euro Will Mean No More EU Money for Athens – Martin Schulz
Lafontaine apparently referred to the ongoing crisis in Greece, which many analysts claim was sparked by a spate of austerity measures that were in turn imposed by Germany.

From Lafontaine's point of view, Greece must turn back to the Drachma, its former currency, to regain its footing. "It is absolutely clear that Greece cannot achieve economic progress amid the current harsh conditions of the single currency", he concluded.

On Friday, the Greek parliament supported a new reform plan by the country's government to resolve Greece's debt gridlock and secure a new bailout package.