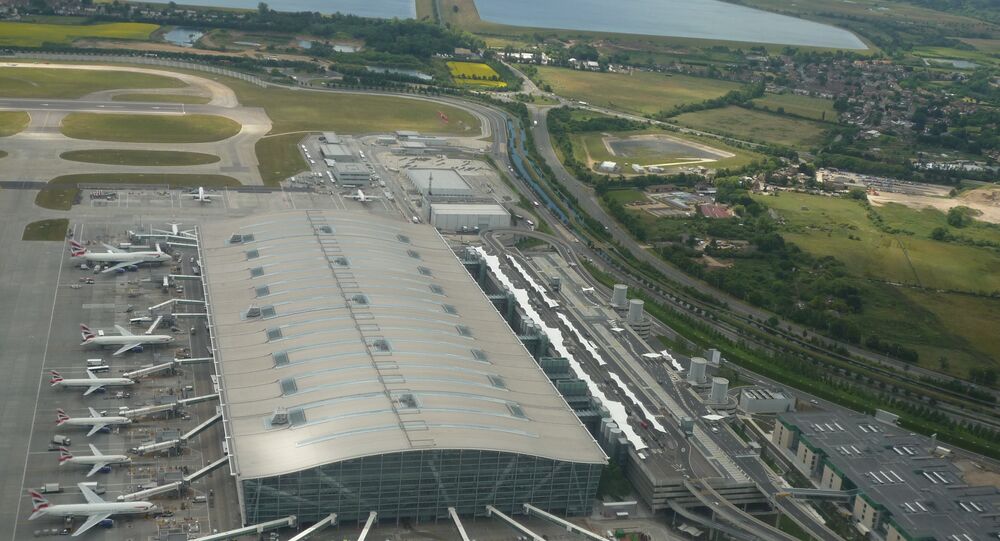 A drone’s near miss with an aircraft arriving at London’s busy Heathrow airport has prompted aviation officials and experts to reiterate warnings about potentially disastrous consequences related to the unmanned aerial vehicles.

© Flickr / Phillip Capper
Commercial Flight Nearly Collides With Drone Over NYC
It was described by the pilot as "rectangular" and "propeller driven," according to the UK Airport Board (UKAB), indicating that the unidentified object was a remotely piloted drone.  It was flown over the Airbus A320 as it readied for touch-down at London’s busiest airport on Monday.

The unidentified object, believed to be a drone, was flown over the 150-seater Airbus A320 at 1,700 feet as it reading for touch-down in London’s busiest airport on Monday, according to a report by the UK Airport Board (UKAB).

The incident marks the fourth recorded near collision between a plane and an unmanned aircraft in at a British airport, and the second this year.  Earlier in March, the UKAB revealed that a "black object appeared in the direction of the approach path" of another commercial flight just five miles from Heathrow. The controller was never found.

Aviation officials were quick to condemn the near-miss as "irresponsible," with many pointing to the "catastrophic damage" that unmanned aircrafts can inflict on passenger planes.

Drones are classified as "aircraft" by the UK’s Civil Aviation Authority (CAA), which additionally provides strict guidelines for their operation. Under CAA regulations, the unmanned aircraft cannot be flown within 492 feet of built-up areas or within 164 feet of any vehicle, including airplanes. They also should not be flown over crowds of more than 1,000 people and the operator must keep the drone within sight at all times.

Despite this, drones have become increasingly popular "toys" in the country.  They are available to anyone and can be purchased for less than 100 UK pounds. And while 500 aviation permits were granted for operating drones in 2014, stores that carry them report sales of more than 10,000 vehicles.

Experts at Birmingham University have previously warned that the vehicles’ popularization as recreational devices will result in "significant safety, security, and privacy concerns," adding that the use of drones in the UK will exponentially rise over the next 20 years.

Following the near-collision in March, the CAA said that it was "clearly irresponsible to fly a drone close to an airport or anywhere near other airspace users" and additionally cautioned operators to "take responsibility for their actions."

"Failure to do so could have serious consequences," the agency added. "Anyone breaking the safety rules can be prosecuted."

According to a poll conducted by the British Airline Pilots Association, 52% of the British public believes that those who endanger piloted aircrafts with drones should be given a prison sentence.