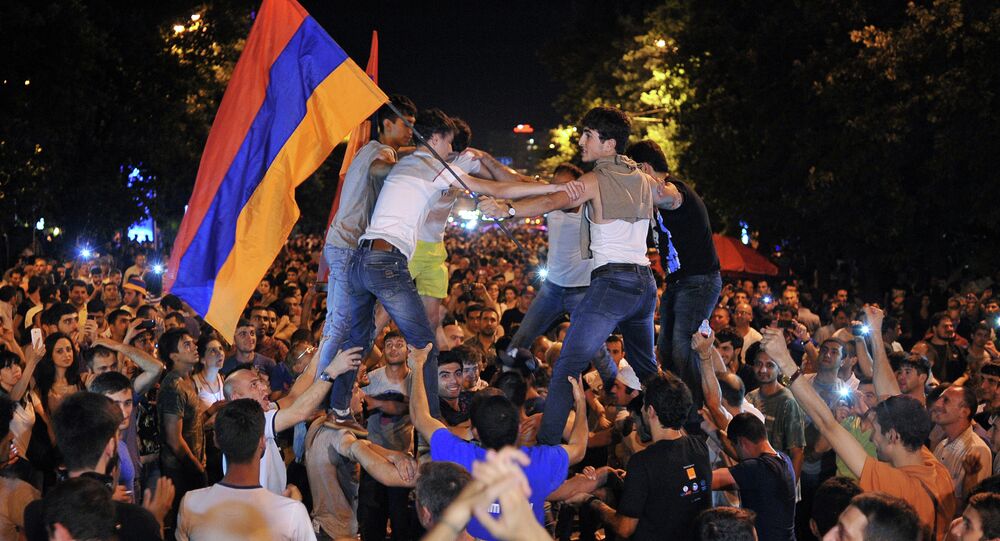 5 Things You Need to Know About Armenia's 'Electricity' Protests

Armenia's electricity protests have been alleged to be a coup attempt, something that both police and protesters have denied. We look at five notable trends behind the protests.

Armenia's protests, while allegedly apolitical, have increasingly begun looking like they are more of a political than a social protest. However, their self-proclaimed apolitical nature clash with other factors seen in the protests and the situation surrounding them.

Facebook / gazeta.ru
'Electric Yerevan' is Sliding Out of Control
Yerevan's police have acted very inconsistently with the protesters, at times dispersing them with water cannons and at other time doing nothing to prevent gatherings. Police chief Valery Osipyan previously said that he is also against the price hike, but aims to uphold the law.

Armenian police also plan to hold a football match with the protesters after the rally on Thursday concludes. Osipyan also refused to remove makeshift barricades at the protests, telling journalists that they don't get in the way of the police.

The combination of the use of force together with an order to not disperse the protest completely was previously been seen at the Ukrainian Euromaidan protests. In Kiev, riot police were ordered back when they were close to dismantling the protest camp, according to reports at the time and later testimonials.

© Sputnik / O. Ivanov
The Interests That Power Armenia's 'Electric' Protests
The Vorotan hydroelectric cascade, which generates half of Armenia's hydroelectric power sold to the US ContourGlobal on June 6, which then agreed with Armenia's energy regulator to considerably raise prices for the electricity it generates. Protests began when the energy distributor, Electric Networks of Armenia agreed with the regulator to raise energy prices for consumers.

The privatization and sale of the company to ContourGlobal violated multiple Armenian laws, including Armenia's laws on water resources and its privatization law. The deal, which required parliamentary approval to sell the holding, was negotiated on the executive level by the country's president and its now-ambassador to the US, Tigran Sargsyan.

If the protests do succeed at reversing the price hike decision, they could force the energy distributor, Russian InterRAO-owned Electric Networks of Armenia, which already operates at a loss, out of business and open the company for acquisition, considerably changing the country's energy landscape.

3. Officials Behind the Vorotan Sale Were Removed but Remain Influential

Members of Armenian President Serzh Sargsyan's inner circle, including former Prime Minister Tigran Sargsyan, who became the country's ambassador to the United States after signing an agreement with CascadeGlobal regarding the sale of the Vorotan Hydroelectric Cascade, were later removed from their positions. The country' energy minister at the time, Armen Movsisyan, was also a signatory to the deal.

© Sputnik / Asatur Yesayants
Armenia May Subsidize Electricity Costs Amid Mass Protests - Prime Minister
In April 2014, President Serzh Sargsyan accepted the resignations of the prime minister and the energy minister. Former Prime Minister Tigran Sargsyan was appointed Armenia's Ambassador to the United States in June 2014, while Movsisyan was made an advisor to the president. Tigran Sargsyan's own political positions have been seen as inconsistent, as he was considered a pro-Western leader in Armenia while in Russia he was considered the chief negotiator for Armenia's entry to the Eurasian Customs Union.

Armenian political sources initially expected Tigran Sargyan to become an ambassador to Russia or the EU, but he was later made ambassador to the United States. Armenian media alleged as early as 2013 that Tigran Sargsyan could be planning a coup after Armenia joins the Eurasian Customs Union.

Both men have also faced corruption-related inquiries in recent years. Tigran Sargsyan was found to have ownership in an off-shore capital fund during his time as prime minister. Armen Movsisyan, who was able to stay away from corruption-related issues in his 16 years as energy minister was pursued by the Armenian opposition in October 2014 over alleged embezzlement at the Nairit chemical plant whose employees protested unpaid wages for years after it was shut down in 2010.

© AP Photo / Narek Aleksanyan
Foreign NGOs May Be Behind Protests in Armenia – Russian Senior Lawmaker
While European Union officials have generally stayed quiet on the issue of protests in Armenia, the Parliamentary Assembly of the Council of Europe (PACE) have issued two resolutions on the Nagorno-Karabakh conflict and democracy in Azerbaijan which Armenia saw as favorable.

PACE is the only body in which legislators from both EU member states and other European countries meet. Its decisions are seen in the media of countries such as Armenia and Azerbaijan as indicators of European countries' political positions.

Armenia's president went on a visit to Brussels on Thursday to deliver a speech at the European People's Party summit.

5. Azerbaijan Directs Anger at Europe but not Armenia

© AP Photo / Vahid Salemi
Azerbaijan Invites Iran to Join TANAP Gas Pipeline Project
Instead, the Azerbaijani government spoke out against the Armenian government, with presidential advisor Ali Hasanov calling the protests "an uprising of the Armenian people against the criminal and anti-popular Sargsyan regime."

Hasanov also spoke out against PACE for its criticism of Azerbaijan and silence on Armenian protests. The deputy head of Azerbaijan Presidential Administration and director of its Foreign Affairs Department Novruz Mammadov said that the statements bring to question Azerbaijan's continued membership in the organization

Azerbaijani parliament member and political analyst Rasim Musabekov told Sputnik Azerbaijan that while the protests appear to be meant as pressure on Russia, it could also be an attempt to change the Armenian leadership.

"I don't exclude that this could be a joint project involving part of the ruling elite," Musabekov told Sputnik Azerbaijan.