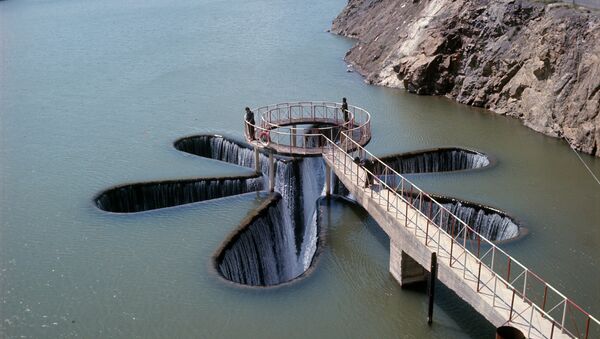 Armenia's "Electric Yerevan" protests against a hike in power tariffs coincide with Armenia's sale of a massive complex of dams to a little-known US company with US government approval. We look at how it could impact US influence in the region.

The protests' declared apolitical nature and the Armenian opposition's relatively marginal role in them could indicate that the conflict is inside Armenia's government and foreign interests rather than an internal political movement. On Wednesday, a rally in Armenia's neighbor Georgia is expected to take place to support the Armenian protests.

If the protests succeed at reversing the price hike decision, they could force the energy distributor, Russian InterRAO-owned Electric Network of Armenia, which already operates at a loss, out of business and open the company for acquisition, considerably changing the country's energy landscape.

"In Armenia's energy system, this cascade is the unit generating the cheapest power. If it is sold for the said $180 million, the new owner will in the near future raise electricity prices by at least 20 to 25 percent," the head of Armenia's Domestic Produers Union Vazgen Safaryan said after the cascade's sale.

'Electric Yerevan' is Sliding Out of Control
The 16 percent consumer price hike implemented by the Armenian energy regulator also coincides with the Vorotan Hydroelectric Cascade's 16 percent share in Armenia's electricity generation. An agreement between the Armenian regulator and ContourGlobal announced on June 17 raises the tariff for the Vorotan stations' power capacity nearly 5 times. Beginning in March 2016, the tariff per kilowatt-hour will also rise above the current value.

The protests appear to be linked to the US government's continued interest in Armenia's energy sector and ContourGlobal's purchase of the Vorotan cascade, which generates half of the country's hydroelectric power. The conditions of the no-bid privatization of the power stations have been called highly questionable and could indicate inter-government corruption involving high-level US and Armenian officials, according to Sarkis Martiroyan of the Public Institute of Political and Social Studies of the Black Sea-Caspian Region.

Armenia's opposition demanded that the government prevent the stations' privatization as recently as 2014. The leader of the opposition Armenian National Congress, Levon Ter-Petrosyan called the deal illegal in 2014. The current protesters do not appear to have issued any statements on the sale. Armenia's opposition underwent a considerable restructuring earlier in 2015.

"We are not against the sale. But we doubt the terms of the deal, the logic of the price formation, and so on," member of parliament from the opposition Prosperous Armenia party Mikael Melkumyan said in June.

Protesters Remain Barricaded in Yerevan; Police Are on High Alert
The Vorotan Purchase


The Vorotan Hydroelectric Cascade, which generates half of Armenia's hydroelectric power, is also reportedly one of the country's most profitable companies, with a 23 percent annual profit rate. The cascade also has the lowest electricity generation costs in all of Armenia.

The privatization of the company to ContourGlobal violated multiple Armenian laws, including Armenia's laws on water resources and its privatization law. The deal, which required parliamentary approval to sell the holding, was negotiated on the executive level by the country's president and its Ambassador to the US, Tigran Sargsyan.

"The Vorotan Cascade is by itself unique because on the territory of the entire former Soviet Union this cascade, has the biggest slope. This provides the cheapness of the electricity it supplies," Melkumyan added.

As the deal included the sale of not only the power stations, but also the adjacent reservoirs, the $180 million purchase price did not include the roughly $1.125 billion worth of water in the reservoirs which are part of the asset. According to Armenian law, the reservoirs are state property not subject to privatization. ContourGlobal plans to invest around $70 million to modernize the dams, 50 million of which will come from the Armenian government's debt to KWG for the improvements it never made on a previous loan.

15,000 Take to Streets of Armenian Capital Over Utilities Rate Hike
Contours and Networks

While Electric Networks of Armenia has not linked its price hike policy to ContourGlobal's Vorotan acquisition, it has posted statements on its website, stating that the hike is due to increased supplier prices, citing a World Bank expert.

In an official statement, the company also said that factors such as the decrease in hydroelectric power generation in Armenia have been behind the price increase, as the company continued investing into the modernization of Armenia's power grid despite lower revenue.