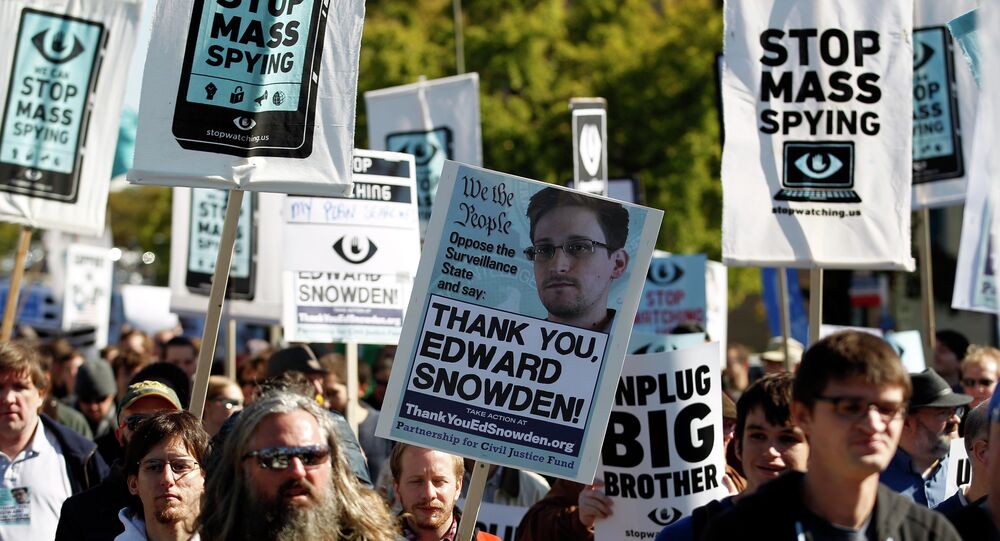 Exactly two years after revelations by former US National Security Agency contractor Edward Snowden shook the world, exposing mass surveillance by the US and UK - intelligence services around the world have been forced to radically rethink their strategies.

Amnesty International told Sputnik in a statement on Wednesday: "In the two years since his revelations, Snowden has changed how we think about communicating online and on our phone. Without him, we simply wouldn’t know about and be able to address the issue of surveillance on our private digital communications. The NSA has in recent weeks been found to be in breach of the US Patriot Act for its surveillance techniques. Snowden brought the information to light – yet the strict charges against him remain.

"We’re calling on President Obama to drop the charges against Snowden that relate to the Espionage Act and to make sure the US doesn’t punish Snowden for blowing the whistle on human rights abuses," said Amnesty in its statement.

Two years after Guardian journalists Glenn Greenwald and Ewen MacAskill and documentary maker Laura Poitras flew from New York to Hong Kong to interview Edward Snowden and begin the process of exposing mass surveillance by Washington and London, the world of global espionage has changed enormously.

In the US, Members of Congress have widely criticized the NSA bulk data collection program, which was proclaimed illegal by a US federal appeals court on May 7, 2015. On Tuesday, Congress passed a law reforming the government surveillance program that collected millions of Americans' telephone records. The NSA now has to obtain legal permission to tap communications of US citizens, rather than make the telecom companies hand over billions of terabytes of data.

What Snowden exposed was the mass collection of electronic data and the way the NSA had teamed up with the UK’s GCHQ intelligence agency to share it among other nations.

© AP Photo / Charles Dharapak
Former NSA Senior Executive: Data Collection Unaffected by Surveillance Law Expiration
In May 2013, Snowden, who had been an employee of defense contractor Booz Allen Hamilton at the National Security Agency (NSA), flew into Hong Kong from Hawaii, carrying four laptop computers with data from some of the US government's most highly-classified secrets.

In June the Guardian newspaper published a story based on Snowden's information revealing that the US government had forced the telecoms giant Verizon to hand over the phone records of millions of Americans.

Snowden alleged that the program involved widespread data-mining with the involvement of the major telecom and internet companies. He further claimed that Britain's signals monitoring center GCHQ had been tapping fiber optic cables in a data-harvesting scheme called Project Tempora.

"I've applied for asylum in 21 different countries, still waiting for response. And wake up every day with a smile on my facet" #AskSnowden

It is claimed that the metadata collected by GCHQ — the information about what is being sent, to whom, from whom, when etc. — was being shared among the Five Eyes electronic eavesdropping alliance comprised of the US, UK, Canada, Australia and New Zealand.

You can (re)watch our #AskSnowden Q&A — available now on youtube: https://t.co/y3JLiPhrcG | Take action for Snowden https://t.co/aB4dsxIqtj

The claims caused as storm in the UK, forcing the heads of all of its intelligence agencies MI5, MI6 and GCHQ to be called before lawmakers who concluded that "the Agencies do not have the legal authority … to intercept every communication of British citizens, or of the internet as a whole: GCHQ are not reading the emails of everyone in the UK."

"This must clearly set out the intrusive powers available to the Agencies, the purposes for which they may use them, and the authorization required before they may do so," its report said.

In Germany, evidence that its own intelligence agency had been working on mass surveillance in tandem with the NSA caused outrage when it was exposed in May and a full parliamentary inquiry is now under way.