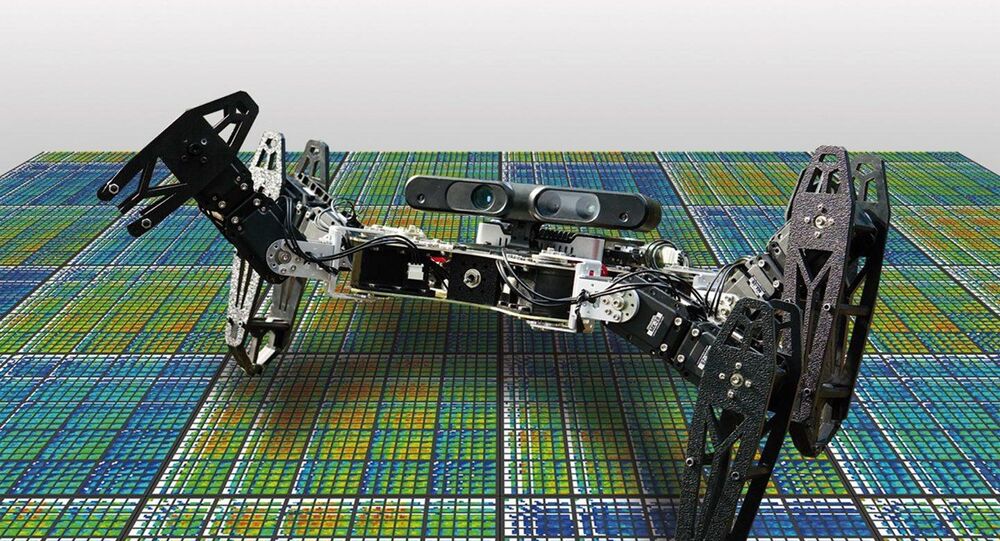 'Injured' Robots Learn to 'Heal' Themselves in Under Two Minutes (VIDEO)

French researchers have designed robots that, after being damaged in action, can quickly "heal" themselves and resume functioning, much like an animal would adapt after being wounded – a key development in the field of robot autonomy.

In experiments, a six-legged robot could adapt in less than two minutes to keep walking even if two of its legs were damaged, broken or missing. A robotic arm also relearned how to place an object in the correct place even with several broken motors or joints.

The experiments, published in the journal "Nature," are the work of a team led by a pair of roboticists from the Pierre and Marie Curie University in France.

"One thing we were surprised by was the extent of damage to which the robots could quickly adapt," study co-author Jean-Baptiste Mouret told Live Science. "We subjected these robots to all sorts of abuse, and they always found a way to keep working."

While robots can survive in extreme conditions, such as deep in the ocean or outer space, their inability to adapt after suffering damage is a major obstacle that has kept them from being widely adopted outside of factories where human workers can repair them. Mouret and his team are working to change that.

"If we send in robots to find survivors after an earthquake, or to put our forest fires, or to shut down a nuclear plant in crisis like Fukushima, we need them to be able to keep working if they become damaged," Mouret said.

"In such situations, every second counts, and robots are likely to become damaged because these environments are very unpredictable and hostile. Even in less extreme cases, such as in-home robot assistants that help the elderly or sick, we want robots to keep performing their important tasks even if some of their parts break."

Looking to nature, researchers considered how injured animals rely on trial and error to learn how to overcome injury – like how limping can ease pain in a leg. With that in mind, scientists developed a trial-and-error program that enables robots to adapt to damage in less than two minutes.

"We do not pre-compute anything like 'find a gait that works if a leg is missing,'" Mouret said. "What we do with the simulator is simply to say 'find as many different ways to walk as you can.'"

Rather than relying on pre-specified contingency plans, the robots are programmed to store knowledge from previous experiences and create a map based on these behavior-performance histories. When damaged, they access that knowledge and adapt accordingly.

"The most important application of these findings is to have robots that can be useful for long periods of time without requiring humans to perform constant maintenance," Mouret said.