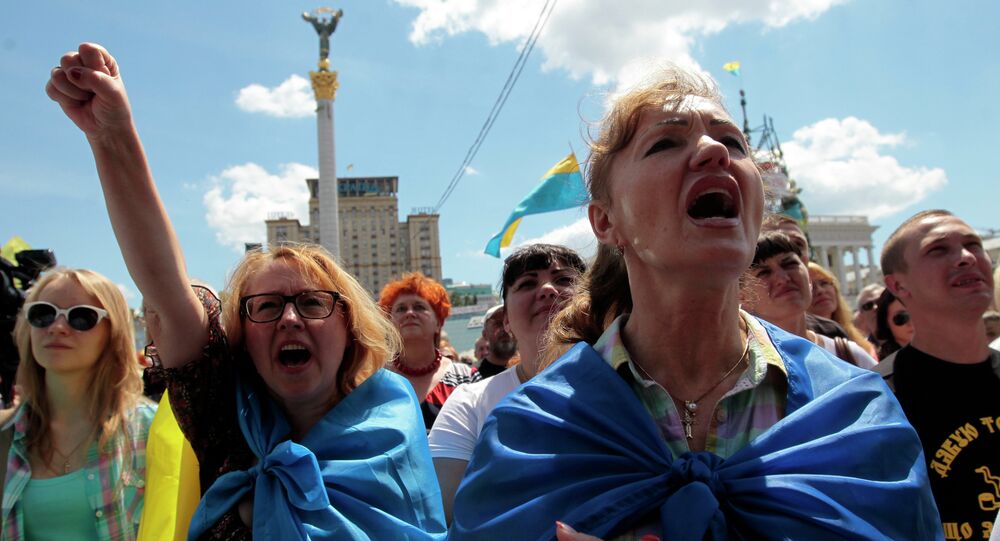 © Photo : radiosvoboda.org
Abuse of Power: Ukraine's Poroshenko Exposed in $25 Mln Land Deal Cover-up
Walking up Khreshchatyk Street, one of the capital's central thoroughfares, protesters carried a variety of slogans, most of them focused on the drastic rise in utilities prices.

Along with Ukrainian flags, protesters also carried a number of posters and banners. Among them was a poster stating that Prime Minister "Yatsenyuk means poverty for Ukraine." Another read "Don't know how to work? Go work as a salesman for Roshen," referring to President Petro Poroshenko's chocolate empire. Another poster featured the phrase 'Mafia go AWAY'. One protester carried a caricature of a man in a barren apartment preparing to hang himself with a loop made out of a hot water pipe.

On May 1, cold and hot water rates grew by 71 percent, while a month earlier, on April 1, gas rates skyrocketed upwards by 285 percent. Ukrainians have been protesting the country's parliament in recent weeks over comments suggesting that the upward revision has yet to be completed.

© Sputnik / Sergey Starostenko
Ukraine's Naftogaz Unlikely to Get Loan for Winter Gas Storage Facilities
With wages and pensions frozen and the hryvnia facing a massive devaluation over the past year while tariffs have continued their upward climb, Ukrainian media reported as far back as January that nearly 30 percent of Ukrainians couldn't pay their utility bills. In 2014, utilities rates grew by 35 percent, while prices for transport, medicines and food have grown between 50-200 percent.
...
Reddit
Google+
Blogger
Pinterest
StumbleUpon
Telegram
WhatsApp
544