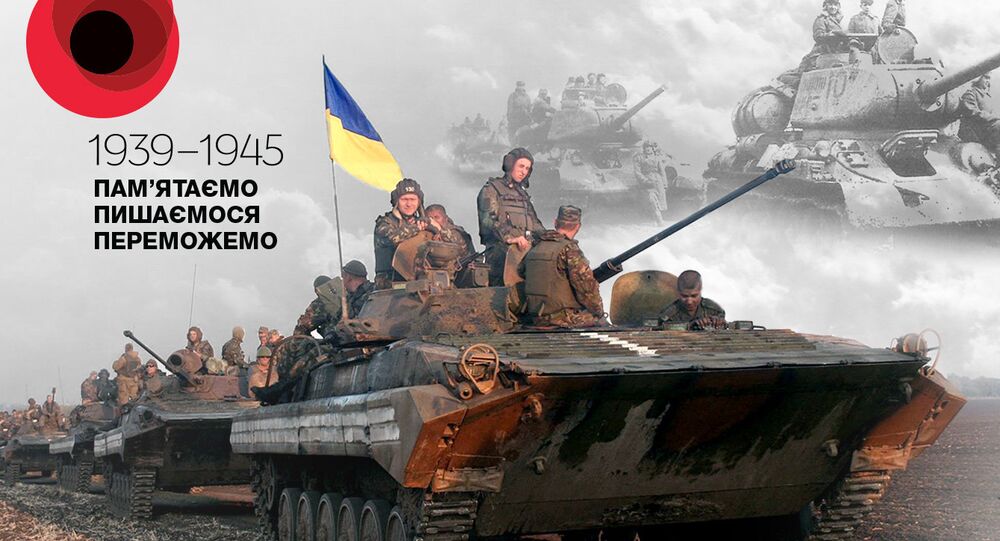 A new propaganda campaign by Ukrainian information warriors features a series of posters attempting to compare the heroism of Ukrainian veterans of the Great Patriotic with today's military operation in eastern Ukraine.

© Sputnik / Loskutov
Hijacking History: Ukraine Erasing USSR's Contribution to Victory in WWII
The campaign was produced by the Information Resistance, the same group which earlier released several short, stylized vignettes attempting to fuse the memory of the victory in the Second World War with today's bloody conflict.

Prefaced with a photo of a column of Ukrainian tanks spliced with a wartime image of Red Army tanks going off to battle, the dramatic campaign's prologue states that while "sometimes it seems that the struggles we are going through have never been faced before…it is enough to take a quick glance at our history to notice that insidious invaders and brave heroes have always existed." The prologue adds that "today, as 70 years ago, they are fighting for our freedom."

The campaign's posters compare the Second World War's heroes, its fierce battles, and the selfless dedication of those working behind the lines with similar images from today's civil war, doing their best to link the two.

homopoliticus
"Everything for the Front. Everything for Victory: Workers in the Rear producing weapons and equipment during the Second World War – Volunteers: Producing equipment for the Anti-Terrorist Operation, including armored shields.
homopoliticus
"A Warm Welcome: Joyfully greeting the victors – Meeting our soldiers warmly and believing in victory."

"Here's the kind of 'product' being served up by Ukrainian propaganda. Comparing the 'Anti-Terrorist Operation' with the Great Patriotic War is, to put it lightly, is a bit much."

Putting aside the obscenity of using the sacred imagery of the Second World War to propagate modern war aims, a few of the posters feature much more sinister messages. Among them is a poster comparing the Defense of Sevastopol with the defense of the Donetsk airport:

homopoliticus
"Not One Step Back! The Defense of Sevastopol, lasting 250 days – Donetsk Airport, under siege for 242 days"

Social media users commenting on the posters' tastelessness have taken a particular dislike to this one, questioning the sanity of comparing one of the greatest examples of the Red Army's fierce resistance to technically and numerically superior Nazi forces with the battle for Donetsk airport, a clash between a few thousand Ukrainian army regulars and  volunteer battalion units against anti-Maidan militia.

Furthermore, the write-up to the poster on the campaign's website reads more like a listing of war criminals than of 'heroes' valiantly defending against superior rebels. In addition to units of the regular army, the forces fighting on Ukraine's side are listed to have included volunteers from the Right Sector, the Dnepr-1 battalion, a 'volunteer' battalion funded by Dnepropetrovsk oligarch Ihor Kolomoisky, and reinforcements from the OUN battalion. Consisting mostly of radicalized nationalist Ukrainian youth, Ukraine's battalions have been repeatedly accused of war crimes against the residents of Donbass.

Possibly the most offensive poster in the series is the one devoted to the Nazi collaborationist Ukrainian Insurgent Army:

homopoliticus
"For the Homeland: Partisans from Ukrainian Insurgent Army: Fought against the invaders during the Second World War. – Volunteer battalions: Protecting Ukraine from terrorists in the east of the country."

At first glance, this appears to be the most honest poster in the campaign, given that like their Ukrainian Insurgent Army predecessors, many of the modern volunteer battalions and their members are motivated by far right nationalist and even neo-Nazi ideology. The Post-Maidan revolutionary slogans of "Glory to Ukraine!" and "Glory to Heroes!", beloved by the country's volunteer fighters, are taken straight from the lexicon of Stephan Bandera, UPA's wartime leader.

© Sputnik / Pyotr Zadorozhnyi
Streamlining History: Ukrainian Memorial Project Presents USSR-Free Version of WWII
The write-up to the campaign states that while the "Ukrainian national resistance movement was not able to liberate Ukraine from the Nazis on their own, they did free vast territories of Volyn, Polissya and Galicia of occupation, establishing local administrations…In the spring of 1943, the Germans stated in their private correspondence that they did not control 75 percent of Volyn's agricultural land and 52 percent of its supply of cattle."

What the description fails to mention is that the so-called liberation of these territories by UPA also involved the massacre of up to 120,000 ethnic Poles, along with tens of thousands of Jews, Russians and 'Russophile' Ukrainians.

In 2008, the government of Viktor Yushchenko sent a request to German archivists, asking them for any documentary evidence of battles between the UPA and the German military. The archivists couldn't find any evidence of such battles, although they did find correspondence documenting several attacks on supply stockpiles. Hence, while the UPA could not manage to "liberate Ukraine" from the Nazis, they were much more successful in "liberating" the territories under their control from Poles, Jews, Russians and anti-fascist Ukrainians.

The Importance of Propaganda

© AP Photo / Efrem Lukatsky
Back to Red and Black: Ukraine's Controversial New Colors for Victory Day
The campaign by Information Resistance concludes with the statement that propaganda "has become almost more important than the armed confrontation." The group notes that "although the propaganda machine of the Putin regime is larger and more powerful than Ukraine's fighters of informational resistance, we respond to the avalanche of lies by exposing their fakes, with witty memes and creative media campaigns."

There is no doubt that the placing of historic photos from the most terrible conflict in human history side by side with contemporary photos of Ukraine's brutal civil war shows 'wittiness' and 'creativity'. The fact that it's untimely, distasteful, and disrespectful to the memory of those killed in both conflicts is not a matter for propagandists to concern themselves with.

The campaign by Information Resistance is in line with that of another organization, the Institute of National Remembrance, which in addition to its efforts to airbrush the USSR out of the Second World War has been using similar techniques to splice the memory of the Great Patriotic War with the war in Donbass.

"Son, return home alive. A mother's letter to her son."