According to the Green Party parliamentary candidate, Britain's decision to go along with the US-led intervention in the Middle East has created conditions for the rise of fundamentalism at home and the radicalization of UK citizens who travel abroad to fight for Islamists. 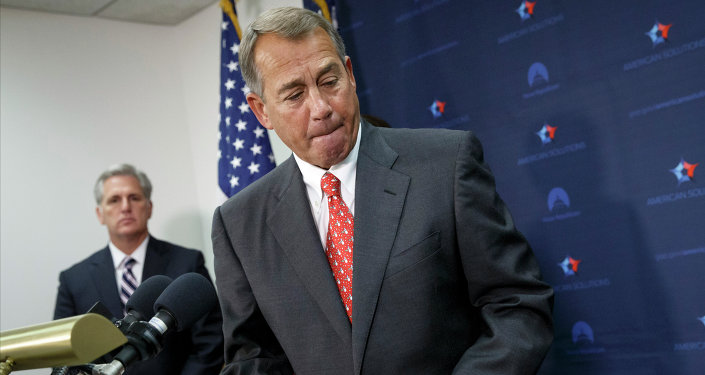 © AP Photo / J. Scott Applewhite
US Lawmakers Travel to Middle East, UK to Discuss Security Cooperation
BRISTOL (Sputnik), Daria Chernyshova – Britain's decision to go along with the US-led intervention in the Middle East has created conditions for the rise of fundamentalism at home and the radicalization of UK citizens who travel abroad to fight for Islamists, the Green Party parliamentary candidate for Bristol West told Sputnik.

"I really think that by going in to the Middle East with America, we have created the conditions for a fundamentalist backlash… I think the radicalization is happening because of our aggressive foreign policy," Darren Hall, the Green Party's national home affairs spokesman, said in an interview.

The influence of radical Islamist groups in the Middle East has increased dramatically since the UK and US invasion of Iraq in 2003. In the summer of 2014, the region witnessed the rapid rise of the Islamic State (ISIL) insurgency that has been attracting fighters from around the world to fight for its cause in Syria and Iraq.

Hall blamed Washington for dragging London into the Iraq and Afghanistan conflicts, adding that Britain should only have gone there under a UN peacekeeping mandate. He condemned UK politicians for making decisions based on political expediency and being too afraid to loose votes if they opposed aggressive foreign policies.

The United Kingdom now has to live with these mistakes in a reality where mothers see their sons and daughters going to fight in the same war but on opposite sides. About 600 Britons are estimated to be currently fighting alongside the ISIL group, according to the London-based International Center for the Study of Radicalization and Political Violence. In total, the ISIL insurgency has drawn at least 20,000 foreign fighters from over 40 countries under its banner.

Britain’s foreign aid budget should be doubled to correct foreign policy mistakes that have contributed to instability in the Middle East, the Green Party’s parliamentary candidate said.

"We would like to see our aid budget increase to 1 percent of our GDP from 0.47 percent at the moment, to help people so that they don't need to flee," Darren Hall said in an interview.

He stressed that the UK policy in the Middle East, specifically London’s participation in military campaigns in Iraq and Afghanistan, has created a huge problem.

"I think it was a mistake to go to Iraq, we should not have done that, but we need to now fix it, through peaceful means, not through aggression. And that will then stabilize, or help start stabilize the Middle East," Hall told Sputnik.

Hall, who is also the Green Party’s national home affairs spokesman, said the United Kingdom should also help North Africa, so that it becomes a stable region that can feed itself.

Stabilization of the situation in these regions, Hall believes, will help stop the flow of migrants coming to the United Kingdom. Sweden

The influx of refugees to Europe, predominantly to Britain and Germany, has surged in recent years due to ongoing hostilities in North Africa’s Libya, as well as in the Middle Eastern countries of Syria and Iraq.

"At the moment we know the environmental standards are lower [in the United States], our suspicion is that this is the US businesses trying to trickle down standards in Europe if they can access our market," Darren Hall said.

The ninth round of US-EU talks on the deal to create the world's largest free trade zone finished last month in New York. Washington has been advocating the agreement for decades, arguing that it will boost growth on both sides of the Atlantic.

But critics say the agreement would give too much power to transnational corporations, enabling them to drive down environmental and safety standards, as well as wages. One of the most contentious clauses under discussion is the right for corporations to sue governments using secretive panels and ignoring local laws.

"We are at the moment against TTIP and in particular the ISDS, investor- state-dispute- settlement which would allow corporations to sue governments for loss of profit," he said, adding that the treaty is being negotiated behind closed doors.

Hall, who is also running for the Bristol West seat in the UK parliament in this Thursday’s general election, noted that with lower environment standards in Europe, US companies would have more opportunities to spread fracking in Britain.

The UK government has a moratorium on shale gas drilling in place, pending an assessment of its environmental impact. Fracking, or hydraulic fracturing of gas and oil formations, was previously blamed for a series of minor earthquakes that hit the country four years ago.

The United Kingdom needs a strong and independent governmental body to examine the online activities of its GCHQ intelligence service that is at the center of an illegal surveillance scandal, the UK Green Party spokesman said.

"We need a much more open, transparent, strong, independent review body for people like GCHQ and the Secret Service," Darren Hall said in an interview.

Hall, who is also running for the Bristol West seat in the UK parliament in this Thursday’s general election, admitted that the Secret Intelligence Service (SIS), better known as MI6, was doing an important job, but said it must strike a healthy balance between security and privacy.

The Greens’ home affairs spokesman confessed he had nothing against the British spy agency GCHQ reading his electronic correspondence. He added, however, the present controls were so lax that “people might be able to push the limits inappropriately and think they can get away with that.”