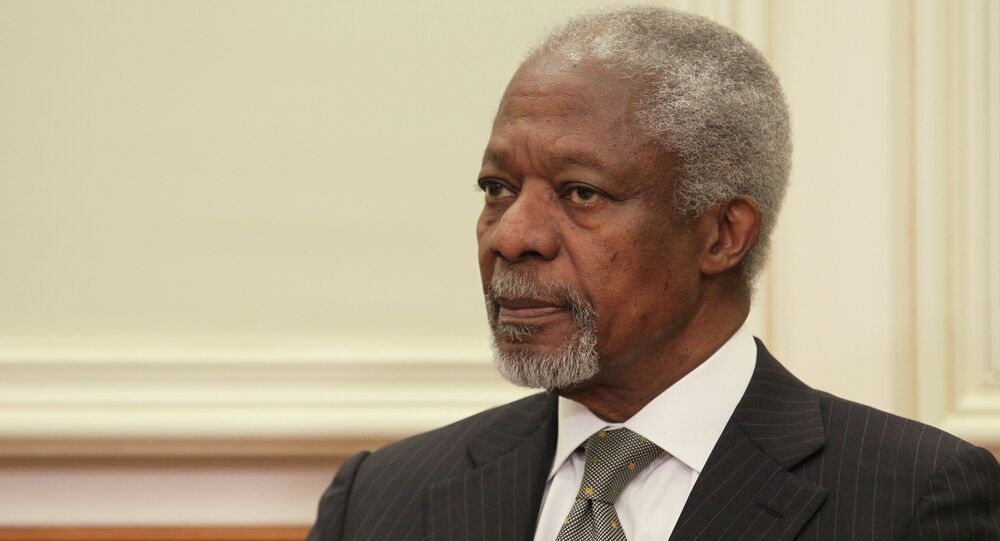 Former UN Secretary-General Kofi Annan said that it should be easier to resolve the Ukrainian problem compared with the crisis in the Middle East.

© Sputnik / Michael Klimentyev
Russian Leader Open to Cooperation With West - Former UN Chief Annan
MOSCOW (Sputnik) – The Minsk peace deal reached as a result of talks between the leaders of Russia, Germany, France and Ukraine in February must be implemented fully and as soon as possible in order to prevent a deterioration of the situation in Ukraine's southeast, former UN Secretary-General Kofi Annan said in an interview with RIA Novosti and RT.

"I think, objectively speaking, it should be easier to resolve the Ukrainian problem compared with what we are dealing with in the Middle East, provided there is will and determination by the leaders concerned and the parties to make the Minsk agreement work," Annan said, adding that the Minsk deal "may not be perfect, but it's workable."

Annan headed a delegation of The Elders, a group of 12 former global leaders, who met with Russian President Vladimir Putin on Wednesday in Moscow.

"The Elders believe firmly that the Minsk 2 agreement must be implemented and implemented fully," Annan said, stressing that "the four leaders who signed it also have the responsibility to make sure it is done and find a way of bringing the parties together to implement the agreement."

© AP Photo / Frank Franklin II
UN Could Fix Security Council Veto Abuse – Ex-UN Chief Annan
According to the former UN Secretary-General, if all the measures stipulated by the deal are not implemented as soon as possible and in full measure, the situation in southeastern Ukraine "could get out of hand."

This is the second truce agreed upon by Ukraine's conflicting parties. The first ceasefire, signed in September, 2014, following Contact Group talks on Ukraine in Minsk, failed to hold.

Both Kiev authorities and the self-proclaimed republics have repeatedly accused each other of violating the Minsk 2 agreement.

EU is Critical of Ukraine’s Unwillingness to Implement Minsk Agreement