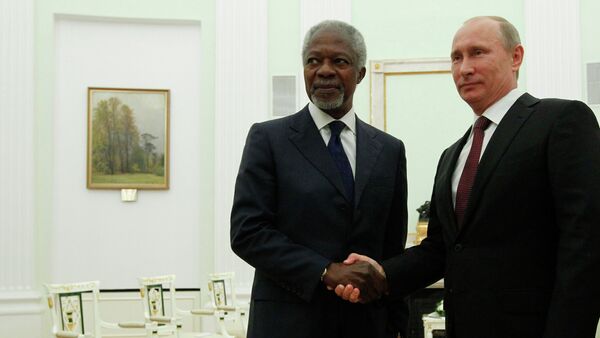 Former UN Secretary-General Kofi Annan, who headed a delegation of The Elders, a group of 12 former global leaders, said that Russian President Vladimir Putin wants to work with the European Union, with the US and other governments to try and improve the world.

Kofi Annan Calls for End to Sponsoring Militants, Government in Syria
MOSCOW (Sputnik) – President Vladimir Putin is willing to cooperate with the European Union and the United States on a variety of issues, former UN Secretary-General Kofi Annan said in an interview with RIA Novosti and RT after a meeting with the Russian leader.

Annan headed a delegation of The Elders, a group of 12 former global leaders, who met with Putin on Wednesday in Moscow.

"We had a frank discussion on the issue of Ukraine. We talked about the Middle East, Syria, Iraq and the spread of terrorism and the need to cooperate [and] to contain it. And what was important is that I left the president convinced that he wants to work with others. He wants to work with the European Union, with the US and other governments to try and improve the world we live in. That is the way to go," Annan said.

According to the former UN Secretary-General, international interests often coincide with national ones in the modern world, so working with others can simultaneously benefit the internal situation in a particular country.

Russia
Putin Remembers Family’s WWII Past in an ‘Intimate’ Op-Ed
"In today's interdependent world no country can go it alone, however powerful. You need to cooperate with others to make the world in your own country safe," Annan stressed.

The West, particularly the United States, has been alienating Russia over allegations of contributing to the ongoing violence in the Ukraine, and accusing Moscow of interfering in Ukraine's internal affairs. Russian authorities have repeatedly stressed that sanctions imposed by the European Union, the United States and their allies against Russia threaten global stability.

Putin has emphasized that economic restrictions hurt not only the target country, but also those with which they are in trade.

The Elders, an independent group created by Nelson Mandela in 2007 and currently chaired by Kofi Annan, aims to promote global peace, often by attracting political and public attention to neglected issues.