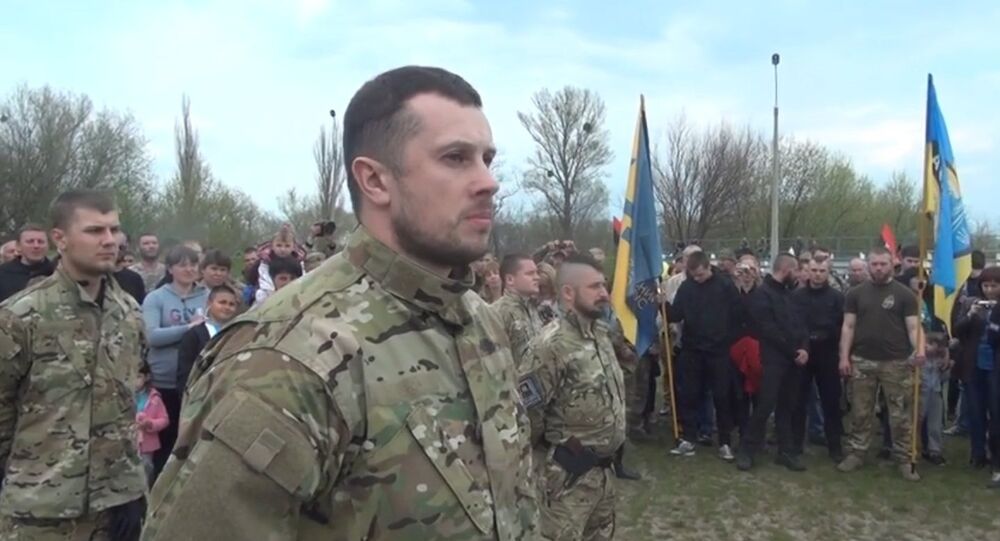 Andriy Biletsky, a Ukrainian parliamentarian who also leads the neo-Nazi Azov Battalion, has taken a concept straight from academia and mixed it with his own racist rhetoric, stating that Ukraine's war in Donbass is really a "war of civilizations" between Ukraine, the guardian of Europe, and Russia, which he calls "Eurasia."

Alexandr Maksimenko
Battalion of Ukrainian Nationalists Refuses to Come Under Army’s Command
Biletsky, the leader of the Social-National Assembly and 'Patriot of Ukraine', its paramilitary wing, harbors unabashedly white supremacist and neo-Nazi political orientations. Recently he took a phrase straight from Samuel Huntington's 'Clash of Civilizations' and mixed it with his own racist commentary.

Continuing his diatribe, which would make Nazi propaganda minister Joseph Goebbels proud, Bilietsky noted that "our enemy's name has changed over the years, but our name has not changed. They [the Russians] were called the Khazars, the Pechenegs, the Poltovtsy, Moskovy, and now, the Russian Federation. But we were, are and will remain Ukrainians, Rusyns."

Calling on the use of extreme force to end this 'war of civilizations', Bilietsky noted:

"Remember, this is our chance to change our karma, to end this war within our generation; to tear up and wipe out the enemy. Otherwise, the war will continue. It will come to our children, our grandchildren, our descendants."

Bilietsky noted that the militia volunteers should be prepared to prepared to die to defend Europe against 'barbarous Eurasia':

"You will now read the prayer of a Ukrainian nationalist. Let it eat into your soul, into your heart. It must become sufficient for you to prepare yourself to go off to die [at the front]. Remember it in those difficult moments which you will face on the front. Remember that you are the descendants of tens, hundreds of generations of heroes going back deep into our history –the Upitsi, the Holodnoyartsi participants of the liberation struggles, Khmelnitsky's Cossacks, the warriors of Sviatoslav and Prince Igor, the Scythians. All of them stood guard over our European civilization against barbarous Eurasia. I believe in you, I believe in our victory. Glory to Ukraine!"

© Sputnik / Alexander Maksimenko
Moscow Names Volunteers Uncontrolled by Kiev a Key Issue in Donbass
Whether willfully or otherwise, Bilietsky's narrative ignored the fact that Ukrainians are not only linguistically and religiously similar to Russians and Belarusians, but also share East Slavic ethnic roots and that Ukraine had been politically united with Russia from the mid-17th century through the breakup of the Soviet Union. The 'war of civilizations' and East-West dichotomy originally applied to the schism in the Roman Empire between Rome and Byzantium, which went on to dictate the spheres of cultural influence affected by Catholicism and Eastern Orthodoxy.

Earlier this week, Ukrainian media reported that the Azov Battalion has been preparing for a "breakthrough" on the front, with Bilietsky declaring that "Russian tanks" were gathering in Donbass to begin an offensive. Donbass commentators have responded by noting that radical sections in the Ukrainian military and especially among the nationalist battalions affiliated with the National Guard may be preparing a Gulf of Tonkin-style scenario to prepare a new summer offensive in Donbass.

Bilietsky's open commentary about his troops' preparedness to end the war via the destruction of the enemy seems only to confirm observers' suspicions. Nationalist commanders including Dmitro Yarosh, who now serves as an advisor to Ukraine's Chief of Staff, have stated that they do not recognize the validity of the Minsk Ceasefire agreement, noting in February that they reserve the right to continue military actions against anti-Kiev militia in eastern Ukraine.

© AP Photo / Evgeniy Maloletka
First Anniversary of Kiev’s Military Operation in East Ukraine
Ukraine's ultranationalist independent armed formations, formed in the midst of the Maidan Revolution last year, played a vital role in the success of the coup, and in securing power in its aftermath. Since April, they have been heavily involved in Kiev's military operation in eastern Ukraine.

Last fall, Amnesty International released a report stating that the armed battalions, Azov among them, have been accused of widespread human rights abuses, including abductions, unlawful detention, extortion and executions.