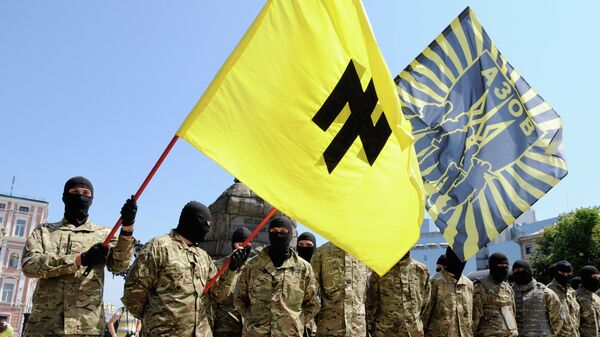 According to Commander Nikolai Kokhanivsky, the decision was made taking into account that battalion forces were roughly disarmed and dismissed in violation of all the agreements with the Ukrainian Armed Forces.

"No we come under no one’s command. This decision was made taking into account that we were roughly disarmed and dismissed in violation of all the agreements with the Ukrainian Armed Forces," Kokhanivsky said.

He added that "if the country needs volunteers but it treats warriors protecting it like that," then battalion troops do not want to be an official unit in the army.

Earlier, Ukrainian Defense Minister Stepan Poltorak said that all units which took part in the special operation in eastern Ukraine were included into the Ukrainian Armed Forces and the National Guard, and there were no volunteer forces in Donbass anymore.

Moscow Names Volunteers Uncontrolled by Kiev a Key Issue in Donbass
Earlier, Kokhanivsky said the Armed Forces command demanded from the battalion to lay down arms and leave positions in Donbass within two hours.
He said the battalion "does not plan to fight with the army despite the violent request to leave in two hours."

The special military operation in Donbass involved Ukrainian regular troops as well as several privately-funded battalions, including Azov, Aidar, Donbass, Dnepr-1 and Dnepr-2 battalions, and forces of the radical Right Sector movement and the OUN.

The Ukrainian government wants volunteer forces to be part of the regular army. Earlier, Kokhanivsky said the battalion reached an agreement with the army to join its 93rd brigade.