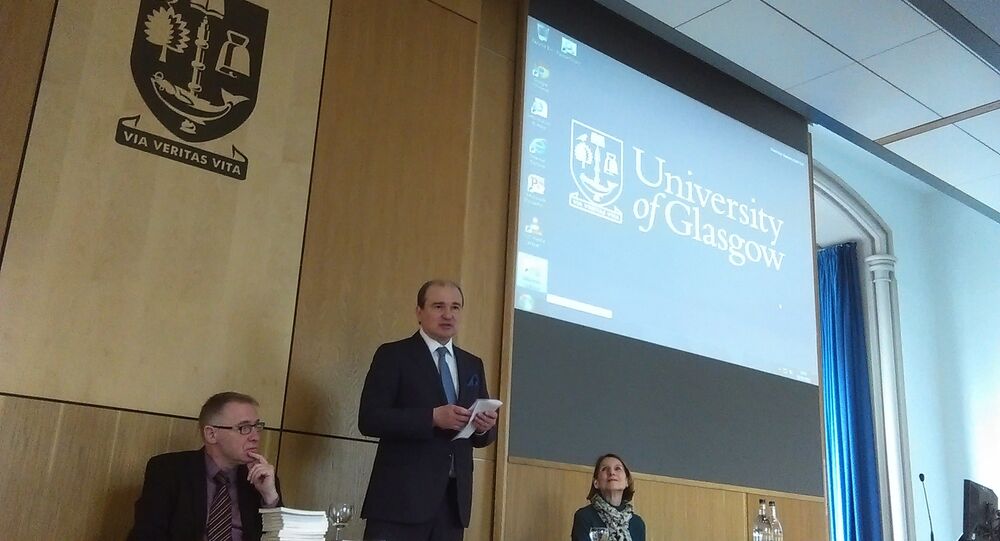 Andrey Pritsepov, the Consul General of the Russian Federation in Edinburgh, has said the annual Pushkin Prizes, awarded this week, are an example of diplomacy in action between the UK and Russia.

The annual Pushkin Prize-winners' Week 2015 saw the 12 winners from schools in Scotland praised for the folios they submitted last winter.

They were joined by two Russian students, Daria Pitolenko and Ksenia Lavrenova, who flew into Edinburgh from St Petersburg for the prizes.

"From the point of view of diplomacy — this is diplomacy working. This is the bridge across the water."

He said the Scottish winner of the competition, 14-year-old Jennifer Maxwell, would later be hosted by Russia in St Petersburg.

United by Poetry and Culture

"While politicians strive to divide countries, it's poetry and culture that unite all of us."

Not long until we welcome the two Russian winners of the Pushkin Prizes to these parts. Then it’s off to @moniackmhor — can’t wait!

"Living together at Moniack Mhor [the Creative Writing Centre in the Scottish Highlands] they communicate all the time and speak a lot with each other. It's very important for them. Maybe they will tell stories about this week to their peers and they will start to realise that we're all in one boat.

"Why should we be enemies?"

The Pushkin Prizes began when some of Alexander Sergeyevich Pushkin's descendants, including Lady Butter, his great-great-great granddaughter, gathered together in 1987 to mark the 150th anniversary of his death.

Lady Butter, inspired to perpetuate her ancestor's memory in a unique and appropriate way, launched the creative writing competition as a pilot project in Scottish secondary schools in Tayside in 1988. The project was such a success that in 1992 a charitable trust was established and over the last decade the opportunity has expanded to include every secondary school in Scotland as well as English language specialist schools in and around Pushkin's home town of St Petersburg.

How Can You Actually Benefit From Learning Russian?

No Sanctions for Pushkin Yet!