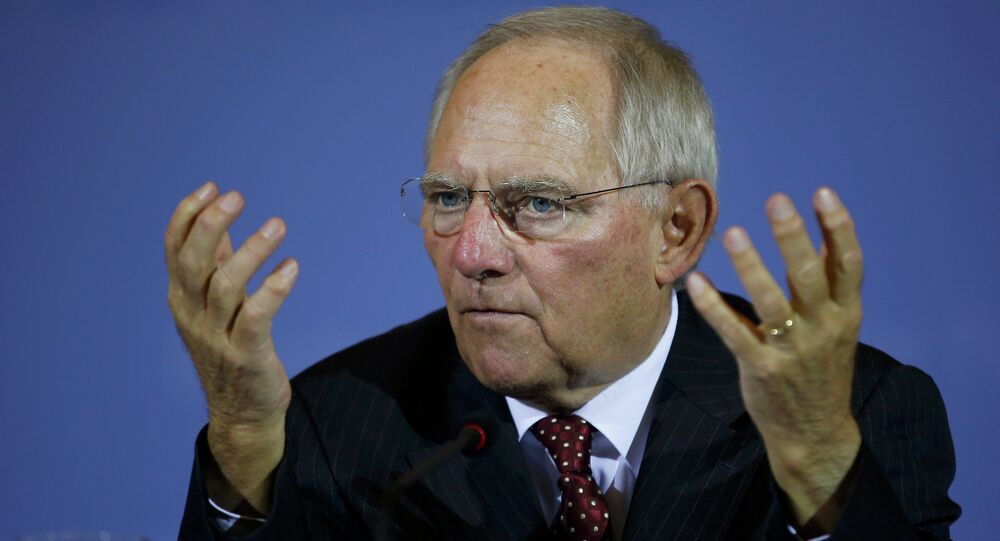 "I'm happy for Greece, if that's the case," Schäuble said on Saturday in Washington, referring to a proposed deal to build a pipeline to pump Russian gas via Turkey and Greece to Europe.

At the meeting of the International Monetary Fund on Saturday, Schäuble said he saw international support for the German position in the Greek debt crisis, Deutsche Welle reported.

© REUTERS / Alkis Konstantinidis
Greece's Debt Should Be Written Off Like Germany's in 1953 – Noam Chomsky
"We are even getting acknowledgment from the very top," he said, referring to US President Barack Obama's recent call on Greece to move quickly with negotiations and reach an agreement with the EU.

The proposed pipeline has not been approved by the European Union.

Russia denied on Saturday a German media report suggesting that it could sign a gas pipeline deal with Greece as early as Tuesday, which could bring up to five billion euros into Athens’ state coffers.

German magazine Der Spiegel, citing a senior figure in Greece’s ruling SYRIZA party, said the advance funds could “turn the page” for Athens, which is now struggling to reach a deal with its creditors to unlock new loans to avert bankruptcy.

Do you believe Greece can bridge the gap between Russia and the EU?
Voted: 1388
All polls
“No, there wasn’t (any agreement),” said Kremlin spokesman Dmitry Peskov, in comments made to Business FM radio and quoted by RIA news agency.

Greece’s coalition Cabinet of the left-wing SYRIZA party and the right-wing Independent Greeks is pushing for a write-off of the 324 billion euros the country owes its foreign creditors, which went to stabilize the nation’s sovereign debt and plug other financial holes.

In early December Russia said it was pulling out of the South Stream project to pump gas to the Balkans, Hungary, Austria and Italy under the Black Sea, deciding instead to lay a pipe to Turkey and build a gas hub on the Greek border for Russian gas buyers in southern Europe.