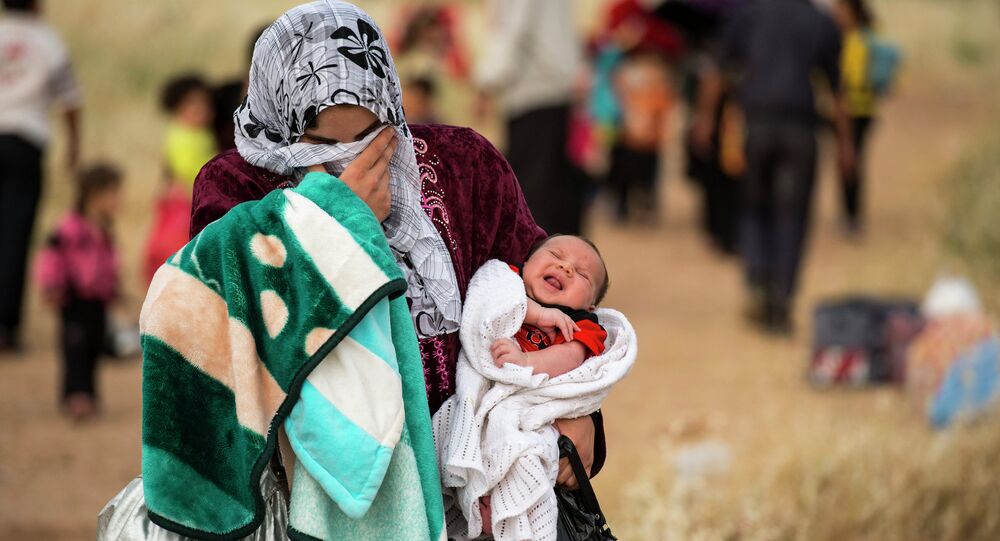 The crisis in Syria is in its fourth year. Over 200,000 people have been killed and over one million injured.

According to a United Nations report, Regional Refugee and Resilience Plan, more than half of all Syrians have been forced to leave their homes. Three point two million Syrians are currently living as refugees in what's the largest displacement crisis in a generation.

Lebanon and Jordan now have the highest number of refugees worldwide. And with the humanitarian crisis continuing, a leading British think tank on foreign affairs suggests Britain should allow 10,000 Syrian refugees to settle in the UK to enhance Middle East relations — despite Britain's controversial role in its foreign and military interventions in the region.

Want to ask #GE2015 candidates what they think of UK taking in 143 #Syria refugees? Ask away! http://t.co/t9uTcV4ofw pic.twitter.com/5jCAFISMIy

The report published by Chatham House is the first in a series of articles on Britain's foreign policy opportunities:

"There is a clear link between instability in the Middle East and the UK's increasing vulnerability to security threats. Current UK government policy towards Syrian refugees only accentuates these threats."

Chatham House suggests that the UK government should open the door to 10,000 vulnerable Syrians. In order to do this, the article says, "it should increase the number of refugees it admits under the Vulnerable Persons Relocation scheme — from hundreds at present to 5,000. And second, it should grant entry to a further 5,000 refugees through a humanitarian temporary admission programme."

The controversy of Britain's foreign policy in the Middle East climaxed in 2003 when former Prime Minister and Labour leader Tony Blair, took Britain to war in Iraq in 2003. Despite more than a million people marching in protest of the decision, Blair convinced parliament that Iraq's leader Saddam Hussein was a threat and that Britain had to join the US in military action.

Since the Iraq War, Blair has been accused of war crimes with many high profile figures, including Bishop Desmond Tutu calling for Blair to stand trial at the International Criminal Court.

On leaving Downing Street, Blair was appointed Middle East envoy, a position, according to senior diplomats, and as published in the Financial Times, that he is being eased out from: "It is long overdue. He has been ineffective in this job. He has no credibility in this part of the world."

The legacy of the Iraq War left many MPs with little choice but to vote against Prime Minister David Cameron's plea to join US military action in Syria against President Bashar al-Assad's regime and amid opposition from Russia's Vladimir Putin.

In August 2013, Cameron was forced to rule out any military action against Syria after Tory rebels joined with Labour to inflict what some described as a humiliating defeat on the Prime Minister.

The then Defense Secretary Philip Hammond told the BBC that "I think it tells us that there is a deep sense of unease about British military involvement in the Middle East and that largely stems from what happened in 2003."

By allowing 10,000 Syrian refugees into Britain, the report by Chatham House suggests it "would provide the UK with considerable soft power, which would benefit both countries in a post-conflict phase. It would help a generation of Syrians, many of whom would be educated in the UK, who will want to return to help reconstruct Syria."

The article also suggests that admitting 10,000 Syrian refugees in the UK "would also help to reduce the appeal that IS [Islamic State] holds for some young Britons," adding that it would "provide a persuasive counter-narrative to extremist perspectives."

However, according to counterterrorism expert, Professor Hamed El-Said, from Manchester Metropolitan University 10,000 is too trivial a number to make any difference.

"Jordan has more than 1.4 million Syrian refugees in its territories, no more than 300,000 or 400,000 are in designated refugee camps like the Zaatari camp. The rest are at large in the country and a significant number of them have already got low paid jobs in cafes and restaurants."

Professor El-Said says even if 10,000 refugees agree to come to the UK, it would only make a small dent in the total number of refugees in Jordan.

"Neither would bringing 10,000 refugees from Jordan contribute to stability in the region," said Said. "Nor would it discourage young Britons from going to Syria.

"Bringing 10,000 Syrians to Britain will have no impact whatsoever on young Britons decision to go to Syria. Only ending the conflict in Syria will help to reduce the number of young Britons going there."