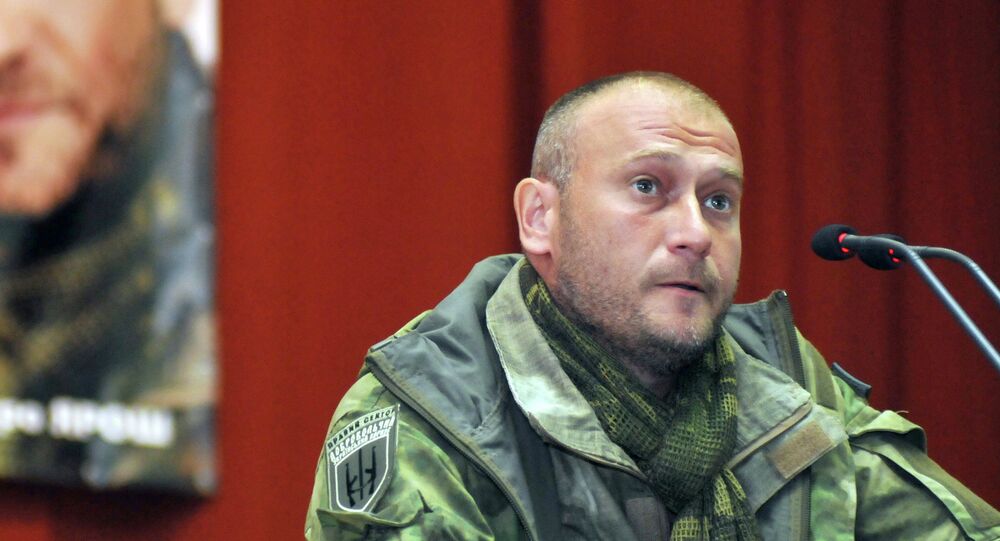 The leader of the extremist organization "Right Sector" will spy on the Ukrainian armed forces and report to the Ukrainian Security Service, the French magazine “Nations Presse” wrote.

The leader of the extremist organization "Right sector" Dmitry Yarosh is a pawn in the hands of the United States, which the country uses to implement its strategy in Central Europe, the French magazine “Nations Presse” wrote.

Yarosh was recently appointed as an Advisor to the Commander-in-Chief of the Ukrainian Armed Forces.

© AP Photo / Alexander Ermochenko
Deploying Peacekeepers in Ukraine Likely to Lead to More War - Expert
The magazine calls Yarosh a “small political commissar of [the Pentagon] in the leadership of the Ukrainian army" and a “globalization flunkey”, who will help the US to establish its interests in the East.

Ukraine is facing hard times, struggling against the economic crisis and numerous domestic problems. And exactly during these times, it is more than ever awash with “advisors” of the US and its allies, the article said.

© Sputnik / Sergey Averin
One Year of Civil War in Ukraine: Timeline and Facts
According to the magazine, Yarosh blackmailed Poroshenko and can now "spy on the Ukrainian military, report [on them] to the Security Service — political police, subordinate to the Kiev branch of the CIA." His appointment may have negative consequences, contributing to the violence against civilians.

"Right Sector" is a Ukrainian association of radical nationalist organizations involved in clashes with the police in January and February 2014, and in the suppression of protests in eastern Ukraine in April 2014.

In November 2014, Russia’s Supreme Court listed "Right sector" as an extremist organization and banned its activities in Russia.

Ukraine Conflict to Last Until US Stops Attempts to Weaken Russia