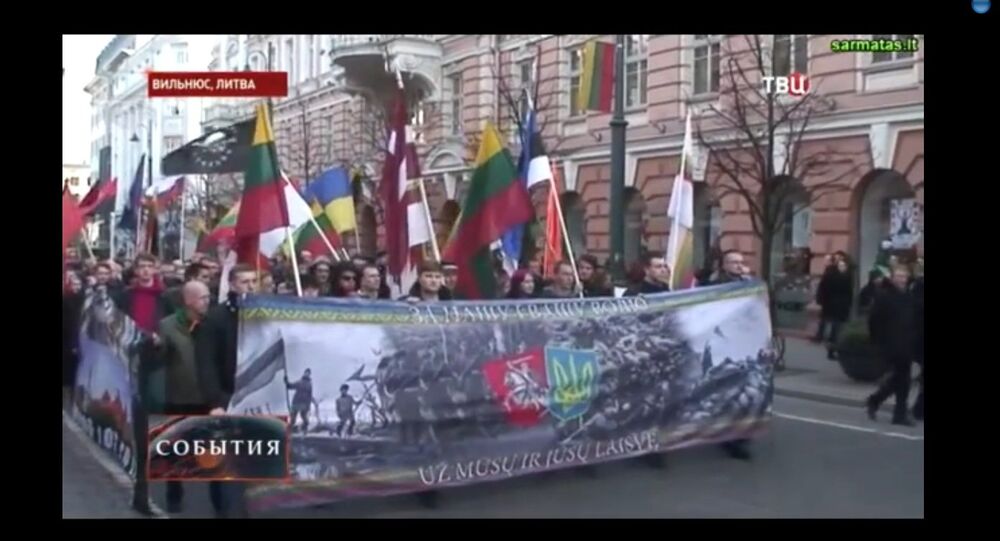 Israeli political analyst Avigdor Eskin told Radio Sputnik about the dangers of an emergent "Neo-Nazi International," and commented on a sensational article by an Israeli public figure who says it's time for Russia and Israel to form an alliance.

/
© Sputnik / Evgeny Kotenko
Antiwar Activist Says US Aid to Ukraine Will Find Its Way Into Hands of 'Fascists'
Speaking with Radio Sputnik on Friday, Israeli publicist and political analyst Avigdor Eskin warned about the emerging dangers of a "Neo-Nazi International," and commented on an article by an Israeli public figure who said that it's time for Russia to become a strategic ally to Israel.

Commenting on Monday's march by several thousand neo-Nazis and other ultranationalists in Vilnius, Eskin remarked that the march signaled a dangerous precedent, noting that the marchers "were joined…by Neo-Nazi parties [from] Ukraine, Lithuania, Estonia and some other European thugs…from different places."

Noting that this march contrasted with the more traditional gatherings of SS veterans from the Baltic republics, Eskin commented that this time, the marchers were supported "not only by their local governments, who allow them to do whatever they want, but they [have invited] their colleagues from Europe to create a kind of Neo-Nazi international. And this is new and especially dangerous." The analyst noted that the international community must "take very serious note" of this trend. Not "satisfied with their own [potential, these groups] are trying to create an international infrastructure which will allow them to be more influential, more efficient."

Eskin noted that Europe faces real problems related to immigration which work only to benefit those peddling far right ideologies. "Many people feel frustrated about the social climate around them, about immigration. And [these] are real problems. And then you see people with radical and Nazi ideologies come and say 'we have the medicine for you; we can cure you in a really simple way.' And this is a real danger for Europe, because whenever Nazism comes, of course, there is no medicine; there is nothing except for gas chambers."

© Flickr / CSIS
Polish Ex-Foreign Minister: Russians Not 'Suicidal', Don't Want Open War
The expert added that the very existence of Neo-Nazi groups in the countries of Eastern Europe is in itself absurd. In his view, while "in Germany there are real reasons for people to be upset…problems with immigrants," places like Ukraine and Lithuania do not have these problems. "They have no problems with immigration because they themselves immigrate elsewhere. And despite that they try to create [an] ideology of supremacy, basing it on their own experience during World War II, when some of them were on the wrong side."

Time for Russia and Israel to Become Strategic Allies?

Earlier this week, Oded Tira, an Israeli civic figure made headlines in Israel by noting that it's time for the country to consider a strategic partnership with Russia. Tira argued that US interest toward Israel is flailing, in part due to the so-called shale revolution, which is leaving the country much less dependent on the oil-exporting nations of the Arab world. He noted that Russia, on the contrary, has proven itself to be an emerging global power, for whom the threat of Islamic fundamentalism is just as great as it is for Israel, and postulated that the country could become a worthy ally to Israel. Tira noted that the recent warming in relations between Washington and Tehran in the fight against ISIL may ultimately result in the simultaneous weakening of US-Israeli and Russian-Iranian relations.

© Sputnik / Vladimir Pesnya
NATO’s New Lease on Life: Confronting Foes of Its Own Creation
Commenting on Tira's article, Eskin noted that it has basically challenged "the whole strategy of Israeli foreign policy," adding that in his view, the scenario painted by Tira is "really interesting [and] sounds very realistic." However, he notes that as far as the upcoming parliamentary elections are concerned, "I don't think there will be any immediate changes." The analyst notes that "we're not facing a situation where the socialists who are the opposition or the liberals will form the government; this is out of the question in Israel today. Therefore, we're not going to see any major changes in policy." He argued however that if Benjamin Netanyahu's Likud gets a strong showing, "he will probably try to do some of the things…Oded Tira mentioned. [Moreover, he] will probably try to do everything that Israel can to become more independent economically from the United States. But in the case of a national unity government, we'll probably see the same atmosphere" and no changes.
...
Reddit
Google+
Blogger
Pinterest
StumbleUpon
Telegram
WhatsApp
109