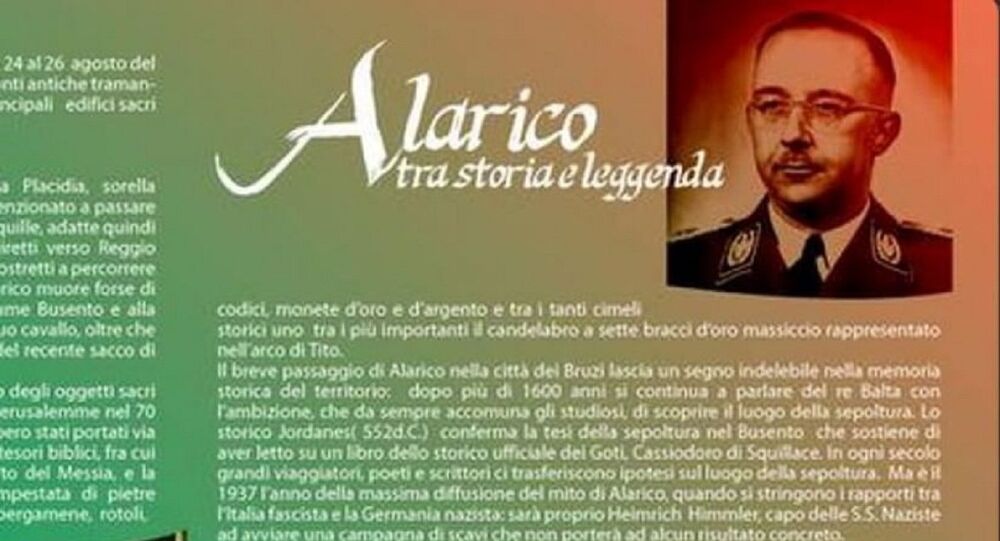 The mayor of the southern Italian town of Cosenza has apologized for the publication of a tourism brochure promoting his town which features a photo of Nazi SS head Heinrich Himmler.

© Wikipedia
Owner Forced to Rechristen Ship Named After Nazi Criminal, Used by Shell
The mayor of the southern Italian town of Cosenza has extended apologies for the publication of a most unwelcome tourism brochure: it featuring a photo of Nazi SS chief Heinrich Himmler, media reports said.

Mayor Mario Occhiuto said the use of the "inappropriate" photo was an "unintentional mistake" by those behind the publication of the brochure, which was distributed at an international travel fair in Milan earlier this month.

The brochure focused on the history of Cosenza and made mention of Himmler, who was credited with sending archaeologists to the town in the 1930s to search for the tomb of Alaric I, a fifth-century Visigoth king who is believed to have died in Cosenza. Alaric I is most notable for having sacked Rome, which marked a decisive event in the decline of the Roman empire.

The decision to feature the Nazi’s image in the brochure drew strong criticism in Milan, and the authorities in Calabria were prodded to order the image to be removed.

Admitting the blunder, Mayor Occhiuto said that "in any case, I have already taken on the responsibility of what happened and I have offered my apologies."

As one of the masterminds of the Holocaust, Himmler oversaw the implementation of the so-called “Final Solution”, a plan for the genocide of all European Jews. He was the second most powerful Nazi behind Adolf Hitler.

Himmler was handed over to the British after he was captured by Soviet soldiers on May 20, 1945.

Three days later, he committed suicide by biting down on a cyanide capsule hidden in his mouth.