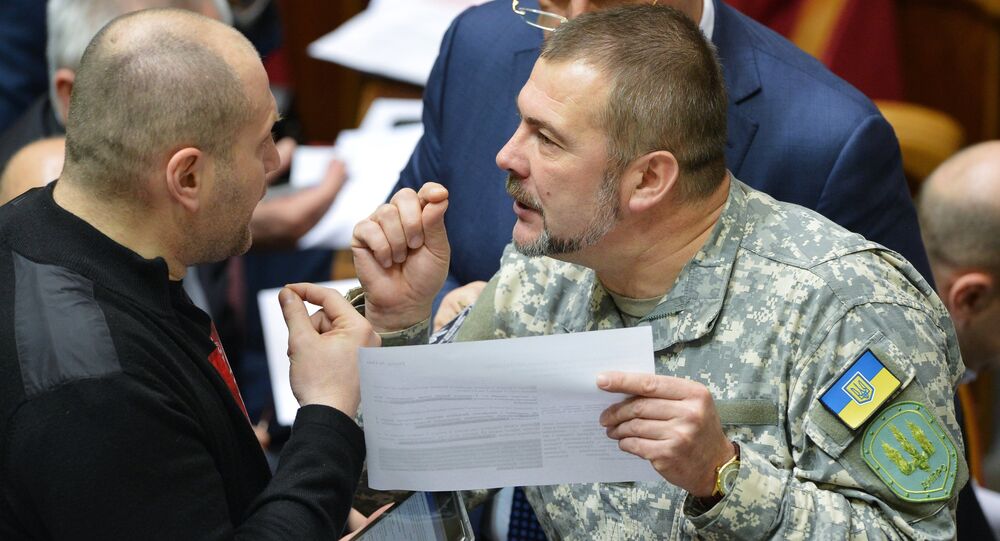 You can take the leader out of his battalion, but you can't take the battalion out of its leader: a Ukrainian MP has issued outrageous threats against Crimea and threatened to torch its population.

The militantly pro-Ukrainian Dnipro Battalion leader- turned-MP Yuri Bereza has promised to "burn down Crimea, with all of its residents if needed," vociferously refusing to “liberate the peninsula in a somewhat cultural manner.” The saber-rattling politician, did not specify who might need the people to be burnt and why.

© Photo : Taken from YouTube
Yury Bereza in a live broadcast on the Ukrainian national TV channel 1+1.

The threat was voiced in a live broadcast on the Ukrainian national TV channel 1+1.

Bereza has already distinguished himself following the scandal over the false photos illustrating an alleged Russian military presence in Ukraine on German TV.

A recent news segment which aired on Germany's federal ZDF channel showed the alleged movement of Russian tanks and missile systems into eastern Ukraine, illustrating the news with the image taken several years earlier, in 2009, and in South Ossetia, not Ukraine.

Twitter/@NovorossiaPress
German TV Channel in Trouble After Being Caught in Ukraine War Lie
The politician first called it “Russian intrigues”, but then opted to accredit it to tabloids.

Earlier in November Bereza pledged his battalion was ready to "intrude" into Russia, to “break into it with reconnaissance detachments and sabotage groups”. The threats were voiced in a live broadcast of the 'Shuster Live' TV show.

The Dnipro Battalion is based in Dnipropetrovsk, which is located near the Donetsk region. It was established in April 2014 to combat pro-independent fighters and is reportedly partially funded by billionaire oligarch Ihor Kolomoyskyi, and is thus nicknamed Kolomoyskyi's battallion.