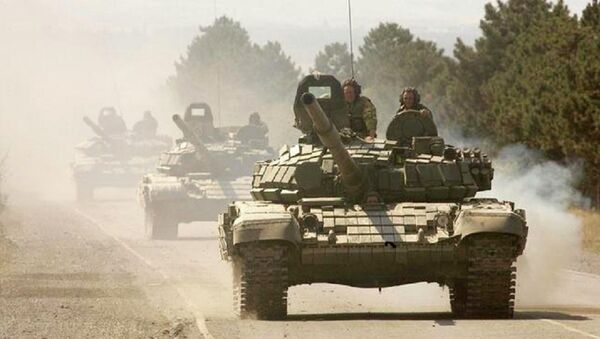 © Twitter/@NovorossiaPress
Subscribe
International
India
Africa
The German federal television channel ZDF got into a bit of trouble recently after a citizens' media monitoring group called them out over false reporting on the presence of Russian tanks in eastern Ukraine.

The complaint, filed by a citizens' group known as the Permanent Open Committee of Media Monitoring, revolves around a photo accompanying a recent news segment airing on ZDF about alleged Russian military presence in eastern Ukraine.

The segment, which described the alleged movement of Russian tanks and missile systems into eastern Ukraine, featured a photo with the caption "Russian armored vehicles moved through Isvarino in the Lugansk region, February 12, 2015," citing "Ukrainian army spokesman Andrei Lysenko in Kiev." The only problem is that the image in question was actually taken several years earlier, in 2009, and in South Ossetia, not Ukraine.

In their complaint to ZDF, one of Germany's largest broadcasters, the Open Committee notes that "it would be interesting to know why such an image, which has nothing to do with the news in question, is being repeated, meant as it is to convince a third party of the truthfulness of assumptions about an "invasion by [Russian] armor."

Maren Mueller, one of the founders of the Open Committee and a former media worker herself, believes that much of German coverage of events in eastern Ukraine is tainted by distortions, half-truths and outright lies. Mueller says that "the coverage of events in Ukraine by the media has reached the height of fantasy, and is not worth taking seriously." She notes that the tank story is just one example of the kinds of distortions that regularly occur. Recently, German media watchers forced an ARD correspondent to retract his words on the deaths of two civilians in Krasnoarmeysk, after the latter had erroneously claimed that the deaths were caused by "the bullets of the new rulers," meaning the anti-Kiev rebels. The channel has since been forced to issue an apology over the mistake.

Ms. Mueller believes that among the biggest problems of the German media's coverage of events is the "dangerous closeness" between the media's line and that of the description of the conflict being provided in the government.

US Senator Admits Being Duped Over Photos of 'Russian Invasion' in Ukraine
Last week a senior American official faced embarrassment on the Senate floor after it turned out that photos of Russian tanks he was presenting as proof of Russian involvement in Ukraine were also from the war in South Ossetia. After finding out that the photos weren't from the Ukraine war, Inhofe stated that "the Ukrainian parliament members who gave us these photos in print form as if it came directly from a camera really did themselves a disservice. We felt confident to release these photos because the images match the reporting of what is going on in the region. I was furious to learn one of the photos provided now appears to be falsified from an AP photo taken in 2008."
Newsfeed
0
Access to the chat has been blocked for violating the rules . You will be able to participate again through:∞. If you do not agree with the blocking, please use the feedback form
The discussion is closed. You can participate in the discussion within 24 hours after the publication of the article.
To participate in the discussion
log in or register
loader
Chats
Заголовок открываемого материала