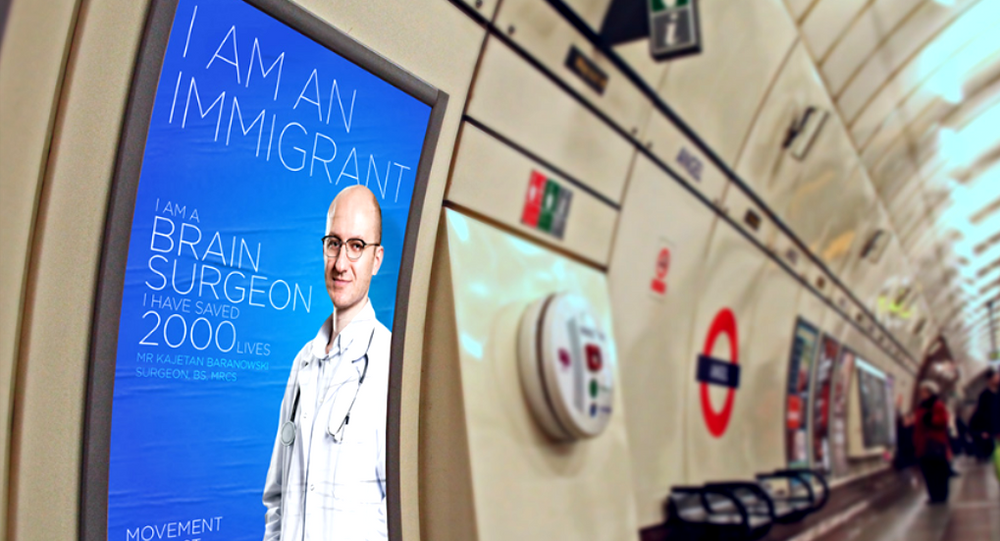 The arrival of immigrants from the Caribbean to Britain in the 1950s was met in some areas with opposition and hostility, stoked by fear and prejudice among some white communities.

Sixty five years on and the issue of immigration is once again dominating the political rhetoric in the run up to the general election.

In response, a new underground campaign has surfaced to champion the many immigrants living in Britain and their contribution to British life. From brain surgeons, teachers, cleaners and tube drivers — each poster produced by the Movement Against Xenophobia will show immigration in a positive light.

The images will be put up across all tube and rail networks ahead of the election and have the potential to be seen by nearly 12 million commuters.

The crowd-funded poster campaign will begin by selecting fifteen migrants of different occupations and walks of life — but needs to raise £45,000.

British Prime Minister David Cameron is under pressure to be seen as taking a strong stance on immigration following the surge in support for the UK Independence Party.

According to the Movement Against Xenophobia, “with the general election, the language and the rhetoric will only get worse”.

“Immigrants are part of the fabric of our society. It’s time to celebrate, not vilify them”.

Habib Rahman, chief executive of the Joint Council for the Welfare of Immigrants, believes: “The tabloid media and irresponsible politicians have shown migrants in a negative life and the rhetoric needs to change”.

The Migration Observatory at the University of Oxford recently published two reports looking at the language used in British newspapers to describe immigrants, asylum seekers, refugees and citizens, particularly from Bulgaria and Romania.

All aboard to celebrate migrants in our communities. Want to see 1,000's of posters on transport? #migrantsmoveme pic.twitter.com/jeuVcM7li9

According to the Islamic Human Rights Commission, the huge gains made by UKIP, “demonstrate the dangerous extent to which racist and Islamophobic discourse has penetrated British political culture”.

In a statement following UKIP’s success in recent by-elections, Massoud Shadjareh, chair of the Islamic Human Rights Commission, said: "The results in these by-elections indicate a worrying shift towards an even more radicalised and discriminatory political narrative. The mainstream media and political classes need to highlight this and back away from it, rather than fuel it."

Six Bosnian Immigrants to US Accused of Supporting Islamic State

Last Call? Are Immigrants to Blame for the Closure of British Pubs?