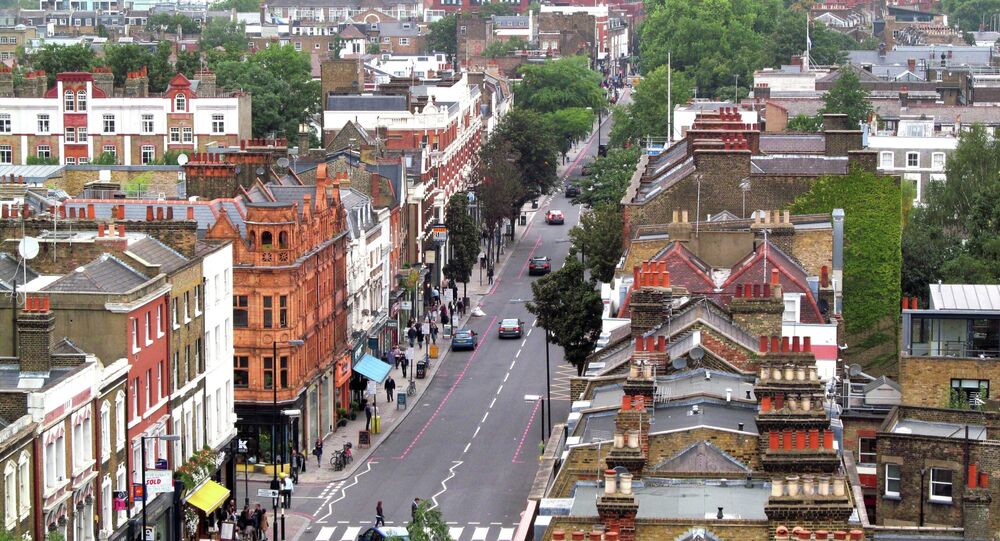 A temporary eco home built from ‘for sale’ signs has been erected in south London. The shelter with room for two people to sleep inside occupies a small patch of grass outside Lewisham Town Hall.

"We made this in half a day". Liam Geary-Baulch told Sputnik UK. "To show the council how easy it is to erect a house. We're here to demand more council homes for Lewisham".

Liam Geary-Baulch has lived in Lewisham all his life and has been campaigning for more council homes for many years.

"There's now over 500 families in emergency accommodation at the cost of over £4 million a year. Rather than spending that money and giving away land, Lewisham should build homes for people to house future generations of people". 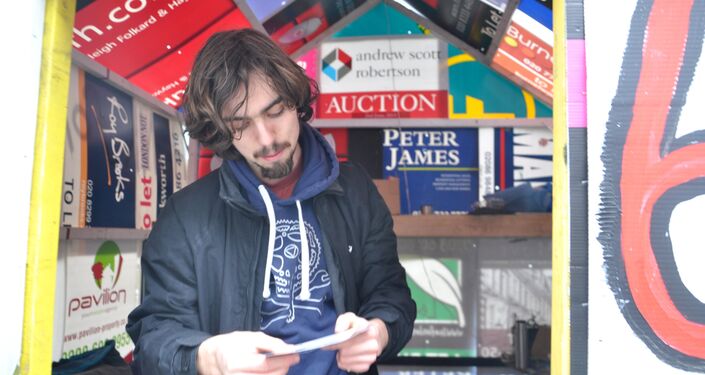 © Sputnik
Activist Liam Geary-Baulch has been campaigning for more council homes for many years.

"The council have lots of sites that they own across the borough", says Geary-Baulch. "But they continue to give them away to private developers rather than build council housing".

According to political party Lewisham People Before Profit, the local authority has built six new council homes in 40 years and has 2,521 empty homes. 'As a Nation we spend £27 Billion on Housing Benefit. More and more homes are going up in Lewisham not to support or deal with local housing need, but to boost the profit and wealth of overseas investors', according to the party.

"They're giving land and money to private developers in central Lewisham and in Catford", says Liam Geary-Baulch.

A report by the Institute for Public Policy research estimates there to be around 635,000 empty homes in England. More than a third have been empty for longer than six months and 22,000 are in London, ‘where housing pressures are particularly intense'.

Prospective homebuyers camped out for two days to secure a one bedroom flat at the former Olympic Park in Stratford. The homes haven't even been built yet and the cheapest flat is £369.000

According to the Institute for Public Policy Research, there are ten empty homes for every homeless family — and the situation is worse in London. The number of families being driven from their homes onto the streets and into temporary accommodation like bed and breakfasts has risen by 8 percent since 2013.

"We're here to demand more council housing in Lewisham ahead of the London wide housing march on Saturday", says Geary-Baluch. "It's a problem all across London, not just in Lewisham".

"The shortage of housing is affecting families and individuals right across London. It's an issue that many people feel strongly about, I fully recognise that and I am passionate about it myself.

© Sputnik
Activists have built a temporary home outside Lewisham Town Hall, demanding housing for all.

"It's why I have made housing a top priority for the Council. This Council is working hard to improve the supply of housing to families in housing need by building at least 500 homes ourselves by 2018, working with housing associations and private developers to get them to build more, bringing empty properties back into use and improving the supply of good quality private, rented accommodation. We are also looking at innovative solutions like our pop-up village to use land that is temporarily vacant.

"People before Profit seem to be unaware of the above facts. The truth is we are taking the necessary steps to address the housing needs of those in Lewisham, as well as taking specific steps to tackle the number of people in temporary accommodation".