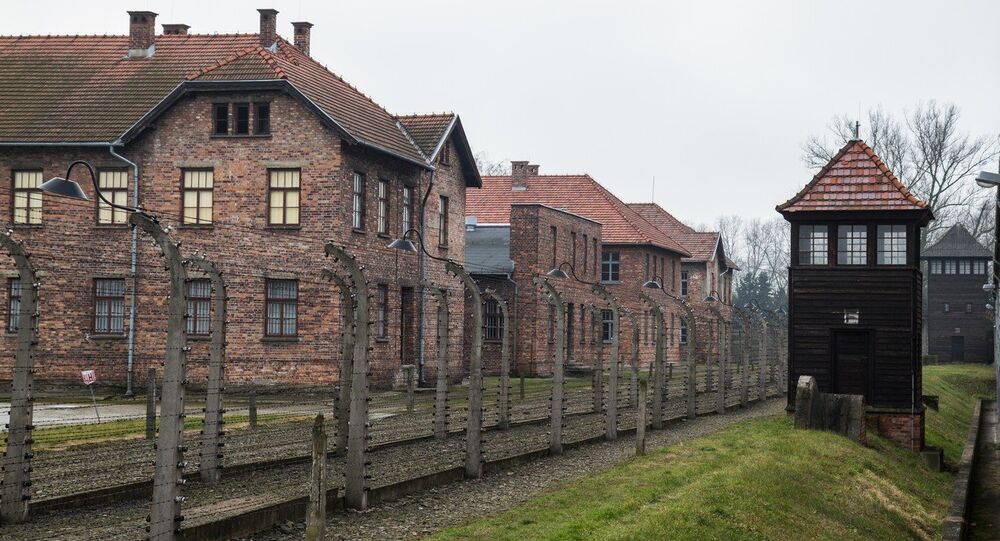 The General Secretary of the International Federation of Resistance Fighters has criticized Poland's decision not to invite the Russian President for the 70th anniversary of the liberation of the Auschwitz concentration camp network.

© REUTERS / Pawel Ulatowski
Russia is Set to Attend Holocaust Memorial Event in Auschwitz
MOSCOW, January 23 (Sputnik) — In late January, Poland plans to commemorate the 70th anniversary of the liberation of Auschwitz, the infamous Nazi German concentration camp in Poland where an estimated 1.1 million people were put to death; however, the events will be held without the participation of the Russian president, who has not received an official invitation from the Polish government. The International Federation of Resistance Fighters, an international collection of World War II partisan organizations, has asked the Polish ambassador in Berlin to clarify why the liberation of Auschwitz, which was carried out by the Red Army on January 27, 1945, will take place without its liberators. Dr. Ulrich Schneider, the organization's General Secretary, discussed the situation with Sputnik.

Dr. Schneider explained that when his organization "learned that the Russian president had not been invited to Poland…this outraged us, because it demonstrated the lack of respect to the Soviet soldiers who liberated the camp, liberated its prisoners."

The partisan organization head notes that after sending a request to the Polish Foreign Ministry to clarify the situation, the answer the group received was that "no politicians were invited." However, as he discovered later, "we found it a complete surprise that the German president would be a guest at the event. To invite the president of the country which committed the crimes, but not to invite the president of the country whose people served as the liberators –this is something we cannot reconcile with."

© REUTERS / Pawel Ulatowski
Moscow Says Poland Talking 'Nonesense' Over Auschwitz Liberation Claim
Dr. Schneider believes this is part of a general trend. "I believe that the belittling of the role of the Soviet army in the Second World War is occurring in a general environment of the falsification of history. Today it is worth [simply] to recall the horrors taking place in Ukraine, where fascist collaborators are raising their heads. And we see other examples. There are constant, politically motivated attempts to downplay and even to forget the role of the Soviet army as liberators within the anti-Hitler coalition. With this the IFR cannot possibly agree."

Despite the fact that the president was not officially invited to the liberation commemoration, Russia will still send a representative, Russian Foreign Minister Sergei Lavrov told journalists earlier this week. On Wednesday, Russian UN Ambassador Vitali Churkin criticized Polish Foreign Minister Grzegorz Schetyna for remarks which appeared to claim that Auschwitz had been liberated by Ukrainian troops.

The Auschwitz concentration camp complex operated from 1940 to 1945 in an area of Poland which had been annexed by Nazi Germany. In the period between September 1941 and January 1945, an estimated 1.1 million people were killed there. Auschwitz is notoriously known for being one of Nazi Germany's largest concentration camps, and serves as a symbol of the Holocaust, with 90 percent of those who died thought to have been Jews. Thousands of Poles, Soviet prisoners of war and others were also put to death. When Soviet troops entered the facility on January 27, 1945, about 7,500 thousand people were found imprisoned in the facility; tens of thousands of others had been evacuated on a forced death march west.

© AP Photo / Markus Schreiber
Yatsenyuk Rewrites History: ‘USSR Invaded Germany’
The International Federation of Resistance Fighters was founded in 1951 in Vienna. Its members include partisan groups from across occupied Europe, the Soviet Union, and from the Axis countries, including Germany, Austria, Italy, Romania, Bulgaria, Croatia, and Slovakia. The group's membership is comprised predominantly of leftists, including communists, who in many European countries served as the main armed resisters to the Nazis during the Second World War.
...
Reddit
Google+
Blogger
Pinterest
StumbleUpon
Telegram
WhatsApp
155