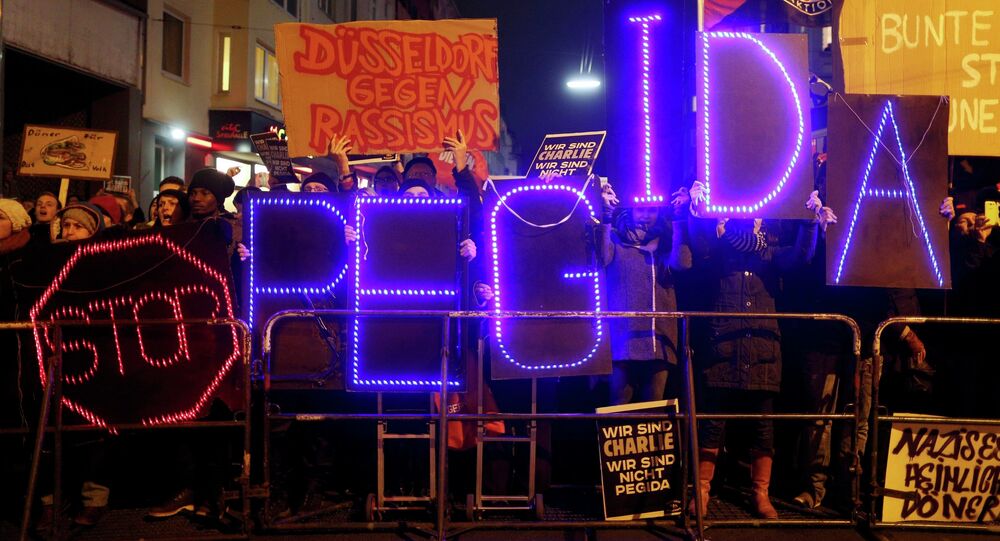 European Parliament member Helmut Scholz stated that majority of Germans are against anti-Islamization rallies and will soon take a clear stand against the Patriotic Europeans Against the Islamization of the West (Pegida) movement.

© REUTERS / Hannibal Hanschke
Anti-Islamization PEGIDA Movement Steps Up Activities Around Europe
MOSCOW, January 14 (Sputnik) – The majority of Germans are against anti-Islamization rallies and will soon take a clear stand against the Patriotic Europeans Against the Islamization of the West (Pegida) movement, European Parliament member Helmut Scholz told Sputnik radio Wednesday.

“I think that the majority of the German population is skeptical of this new phenomenon… In my opinion, this is the reason for the increasing number of those who go out and express their disagreement with Pegida,” Scholz said.

According to the politician, German society is likely to “take a clear stance on the issue in the near future and manifest itself as an open community that is ready to become a temporary or permanent home to immigrants who for various reasons need to leave their countries.”

Pegida organizes weekly rallies in Germany. The movement’s latest demonstration saw an estimated 25,000 people gather in the German city of Dresden on Monday amid the recent Islamist attacks in Paris.

Addressing last week's string of terror attacks in the French capital, Scholz said that the European Parliament “unanimously condemned these acts of violence”, but noted that some parliamentarians felt that “solidarity with the relatives of the victims is insufficient.”

Scholz added that understanding the origins of terrorism is key to finding a way to eliminate the terror threat.

"All [parliament members] who took part in the discussion noted the need for substantial, deep changes in the political and social situation in the Middle East, where al-Qaeda, Islamic State and other terrorist organizations have their origin,” he said.

Last week’s attacks in the French capital, targeting the Charlie Hebdo magazine and a kosher supermarket, claimed the lives of 17 people. The gunmen behind the magazine shooting had reportedly trained alongside al-Qaeda in the Arabian Peninsula in Yemen, while the kosher supermarket attacker had pledged alliance to the Islamic State.