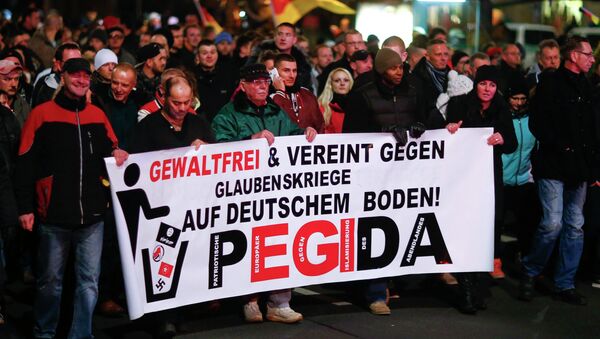 © REUTERS / Hannibal Hanschke
Subscribe
Germany's PEGIDA has won international support, with many European countries launching their own branches of the movement.

Islamization Protests, Counter Protests Sweep Germany
MOSCOW, January 13 (Sputnik) — Germany's Patriotic Europeans Against the Islamization of the West (PEGIDA) movement which has gained notoriety in the media for conducting anti-Islamization rallies in Dresden every Monday, reportedly attracted 25,000 people to this week’s demonstration.

The German branch of PEGIDA was founded in Dresden in October 2014. Since then, it has attracted thousands of Germans, including far-right groups and those concerned with immigration. "We demand from OUR justice an exhaustive use of all legal means against self-proclaimed jihadists and hate preachers!”, the group's Facebook page claims.

Germans to Sing Christmas Carols During 'Anti-Islamization' Rally
According to the group's manifesto, it affirms the right of asylum for refugees, demands an increase in funding for police, opposes violent political ideology, and calls for zero tolerance towards criminal immigrants, a decrease in the number of asylum seekers per social worker and the implementation of all asylum laws, among other things. According to Deutsche Welle, Islamism is branded a misogynist and violent ideology by the group.

Switzerland's wing has been active on Facebook since late December. According to a post on the group's page, they are planning a demonstration on February 16 although the location has not yet been disclosed. "Many people have been awakened since the Islamist terrorist attack in France and realize how big the risk is," the movement's spokesman Ignaz Bearth said, as quoted by 20 Minuten, a German-language newspaper in Switzerland.

According to the UK's PEGIDA Facebook page, an unofficial vigil took place in Manchester on January 11. "PEGIDA United Kingdom is united with PEGIDA Germany and will do marches on Monday 18:30 together in the future."

The French branch of the movement was launched in December 2014, claiming that there is "widespread awareness in Europe that the massive Islamization we see is a real danger to our culture and way of life," according to the group's Facebook page.

The group has repeatedly received harsh criticism from German officials. According to Deutsche Welle, the movement called for an observance of a minute's silence "for victims of terrorism in Paris." Angela Merkel condemned these calls, saying it "was simply disgusting" how PEGIDA was "trying to exploit the despicable crimes in Paris," the German daily Bild reported. "Islam is part of Germany. I am the chancellor of all Germans," Merkel said, as quoted by the BBC.

Many in Germany are against the group, with tens of thousands taking to Dresden streets Saturday with calls for "open mindedness and humanity," Deutsche Welle reported. The city mayor was present, reportedly stating that she was not against PEGIDA protesters, but did not fear people with different skin color, customs or ways.