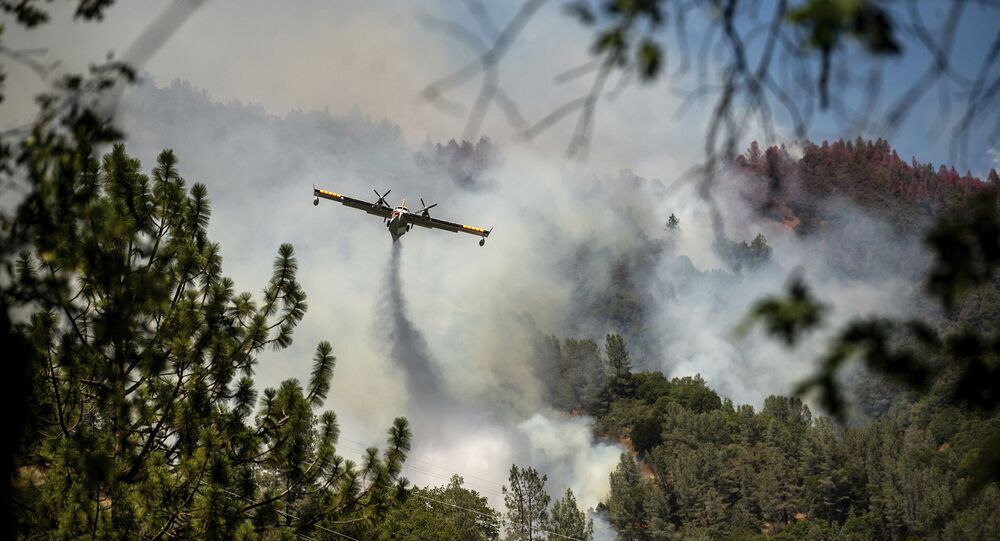 Over the last several days, residents across the Pacific Northwest and in large parts of Canada have been forced to endure a scorching heat wave that has consumed the region and caused such severe conditions that hundreds have died. Blistering temperatures are expected to last through the weekend.

As the heat wave overwhelming the North American Pacific Northwest region has yet to let up its intensity, the current hot and dry conditions have served like kindling and ignited dozens of wildfires in the region as heat-related deaths continue to increase, effectively escalating an already tense situation for many first responders.

The latest figures released by the US National Interagency Fire Center indicate that there are currently 44 large active wildfires burning in the Pacific Northwest, specifically in California and Oregon. Estimates suggest that more than 667,000 acres have been charred as a result.

In California, authorities recorded the Lava Fire in Siskiyou County as the largest wildfire of the 2021 fire season after it consumed upwards of 13,000 acres. An incident report states the blaze, which is only 25% contained, was started by a lightning strike and has grown due to gusting winds.

Further north in Canada’s British Columbia, the situation is not much better. The BC Wildfire Dashboard has recorded 87 active fires, of which 64 have emerged over the last two days. Canadians living in the village of Lytton were forced to evacuate after a wildfire broke out nearby.

© REUTERS / Jennifer Gauthier
A wildfire burns outside of the town of Lytton, where it raged through and forced everyone to evacuate, in British Columbia, Canada, July 1, 2021.

The Lytton fire emerged a day before the village recorded the highest temperature ever in Canada, a shocking 121 degrees Fahrenheit. The ECCC Weather British Columbia reported that the Tuesday temperature marked the third day in a row of broken local weather records.

While wildfires have not been cited for any fatalities, the same cannot be said for the relentless heat. Lisa Lapointe, the chief coroner for the Canadian province, revealed earlier that at least 486 sudden deaths were reported between Friday and Wednesday, marking a 195% spike in fatalities during the normal five-day period.

“While it is too early to say with certainty how many of these deaths are heat related, it is believed likely that the significant increase in deaths reported is attributable to the extreme weather BC has experienced and continues to impact many parts of our province,” Lapointe noted in a Wednesday statement.

Health officials in Washington state and in Oregon have reported similar statistics after having recorded over 100 deaths, with figures only expected to rise.

© REUTERS / Maranie Staab
The sun sets as a boat travels down the Willamette River during a heat wave in Portland, Oregon, U.S. June 27, 2021.

Two cases in Spokane, Washington, saw a pair of individuals die inside their apartment due to apparent heat-related stress. This comes as reports have detailed that many homes across the Pacific Northwest are not fitted with air-conditioning units, as high temperatures are not a norm for the region.

Human-caused climate change has prompted increasingly severe heat waves, year after year, an occurrence that saw 2020 tied with 2016 as the warmest year on record, according to data collected by the US National Aeronautics and Space Administration.

Washington state Gov. Jay Inslee recently touched on the subject in an opinion piece published in the Seattle Times that underscored actions to address the “underlying cause of our changing world - climate change.”

“Our recent discomfort is but the tip of the melting iceberg,” Inslee wrote. “What we felt this week is just the opening act in a looming global disaster.”

Since last week, reports have detailed a variety of infrastructure setbacks caused by the heat wave, some of which include shuttered transportation services and rolling power outages meant to prevent a full grid failure.

MARANIE STAAB
People sleep at a cooling shelter set up during an unprecedented heat wave in Portland, Oregon, U.S. June 27, 2021.

Estimates suggest that about 9,300 customers were the first to lose power on Monday in the Evergreen State before another round of individuals saw the lights go out on Tuesday.

The current extreme weather conditions have also brought on new pressures for businesses attempting to get back into the swing of serving guests and climb out from pandemic-induced financial hardship.

Many restaurants were recently forced to close their doors over a lack of  air conditioning, or as a result of units that failed to sufficiently stave off the heat for customers and employees.