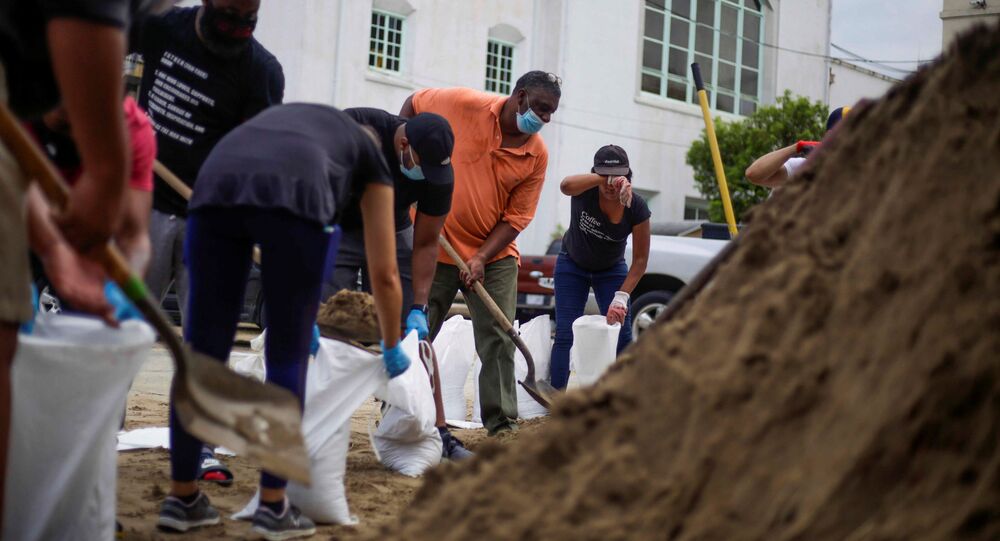 Widespread storm preparations are underway across the US Gulf Coast Tuesday as national forecasters warn that Hurricane Laura, presently churning in the Gulf of Mexico, is gaining strength and will likely strike the US coastline as a Category 3 cyclone.

The latest update from the US National Hurricane Center (NHC) indicates that Laura is roughly 525 miles from Lake Charles, Louisiana, and is moving at a pace of 16 mph. Having maximum sustained winds of 75 mph, Laura is currently a Category 1 storm, per the Saffir-Simpson Hurricane Wind Scale.

Experts anticipate Laura will be upgraded to a Category 3 storm prior to making landfall somewhere along the upper coastline of Texas or southwest coastline of Louisiana sometime late Wednesday into early Thursday.

​The cyclone is expected to continue moving inland throughout Thursday and into Friday, targeting much of Louisiana and Arkansas, as well as the eastern borders of Texas before moving out to the US East Coast.

“Significant strengthening is forecast during the next 36 hours, and Laura is expected to be a major hurricane at landfall,” the NHC’s Tuesday release warns, adding that the hurricane-force winds will extend outwards up to 45 miles from the storm’s eye. The NHC also indicated that tropical storm-level winds could be felt up to 175 miles from Laura’s center.

Upon landfall, a storm surge caused by Hurricane Laura is forecast to make water levels rise between 2 and 13 feet along shorelines from Texas to Mississippi. “The deepest water will occur along the immediate coast near and to the right of the landfall location, where the surge will be accompanied by large and destructive waves,” the NHC notes.

As for the amount of rainfall, the agency predicts that Laura will rain down between 4 and 8 inches of water from Wednesday to Saturday, with isolated maximum amounts of 12 inches in Louisiana, Texas, Mississippi, Ohio and Tennessee.

Many of the areas within Hurricane Laura’s projected path, such as the Houston metro area, have been placed under hurricane warnings. The concrete-filled Houston is particularly vulnerable among areas near the US Gulf Coast, as the city has been known to have poor drainage systems, which was shown by the rainfall brought on by Hurricane Harvey in 2017.

Multiple mandatory evacuation orders have been issued by local officials to residents living along the US coastline. Texans living in the City of Galveston were ordered to leave the area on Tuesday, as Mayor Pro Tem Craig Brown told locals that it’s “imperative that you make plans this morning to secure your homes and move you and your family to safety off island.”

Elsewhere, in Louisiana, Gov. John Bel Edwards told residents that the focus was all on Hurricane Laura and the possibility of severe flooding that would come along with the powerful storm, as Tropical Storm Marco was no longer a major threat.

The two storms began raising red flags recently as weather forecasters noted the chances of two hurricanes striking the US Gulf Coast in back-to-back events in the same exact week. However, the forecast was altered after Marco was downgraded to a tropical depression.

The latest weather developments come as the US National Oceanic and Atmospheric Administration stated in its early August update that the 2020 hurricane season would be “extremely active.”

Tropical Storm Isaias Moves Up the US East Coast - Video

Mandatory Evacuation Ordered in Southeast Louisiana Ahead of Twin Storms