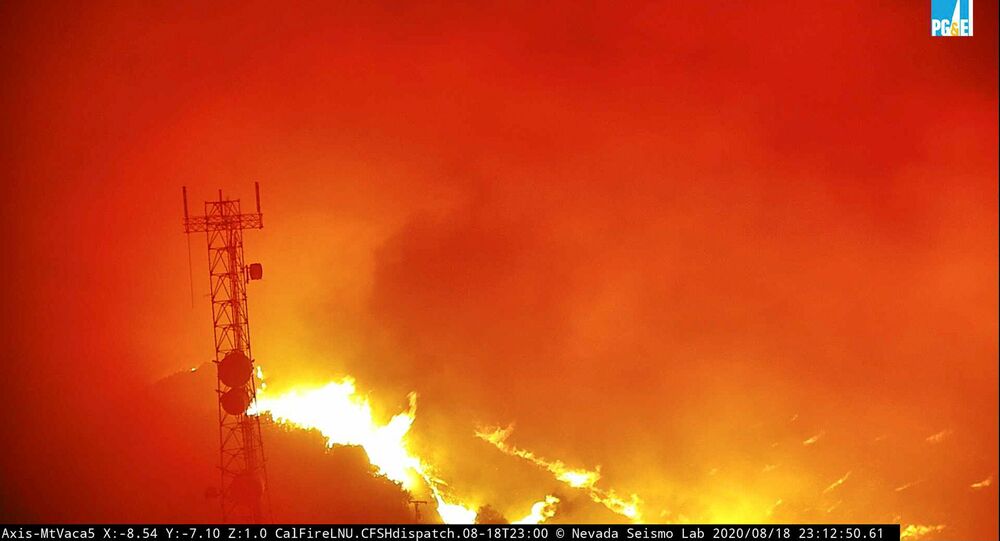 Tens of thousands of Californians were recently forced to flee their homes in the North Bay area as a result of intensifying wildfires spreading across the state.

During a Wednesday news conference, California Governor Gavin Newsom revealed that there are more than 360 known fires currently burning in California. The state is experiencing record heat levels and has seen more than 10,000 lightning strikes in the last 72 hours.

“We’re quite familiar with these challenges. But there’s no question, while last year we experienced some acuity of fires, the total number of fires was substantially lower than what we’re experiencing this year,” Newsom said, the Guardian reported. “The last 72 hours has stretched resources.”

According to the Sacramento Bee, the fires were ignited by lightning on Monday morning in Napa County, and are among several blazes that have already burned around 50 buildings and threatened 1,900 other structures in Napa, Sonoma and Solano counties.

​Those currently most at risk live in the city of Vacaville, which lies between San Francisco and Sacramento and has a population of around 100,000 people, according to the BBC. The city itself is under a partial evacuation, as the Vacaville Fire Protection District has also ordered the evacuations of Pleasants Valley Road and the English Hills area.

“If you're asked to evacuate, please do so safely. Practically every single first responder unit in town is actively working to safely notify, evacuate and fight the fires, so our residents are safe,” the Vacaville Police Department tweeted Tuesday.

The fire threatening Vacaville is part of the LNU Lightning Complex, which is the name given to a group of lightning-caused fires that have burned more than 46,000 acres in Napa, Sonoma and Solano counties in recent days.

Two of the largest fires within the LNU Lightning Complex include the Hennessy and Gamble fires east of the northern Napa Valley and west of Lake Berryessa. Overall, fires spreading across the Golden State have encompassed more than 200,000 acres, according to a map issued by the California Department of Forestry and Fire Protection.

“Last night, we saw a major increase in fire activity throughout both San Mateo and Santa Cruz counties, and we saw several of the fires merge together,” California Fire Deputy Chief Jonathan Cox said during a briefing Wednesday morning, the Los Angeles Times reported.

“Wildfire smoke from numerous fires sparked by lightning over the weekend is expected to cause elevated levels of particulate pollution in the Bay Area. Air quality is forecast to be unhealthy and smoke impacts are possible throughout the region,” reads the alert.

The latest developments come after Newsom declared a statewide emergency on Tuesday to help California respond to the outbreak of fires.

“We are deploying every resource available to keep communities safe as California battles fires across the state during these extreme conditions,” Newsom said. “California and its federal and local partners are working in lockstep to meet the challenge and remain vigilant in the face of continued dangerous weather conditions.”

California Governor Declares State of Emergency After Wildfires Break Out

Some 2,700 People Forced to Evacuate Due to Major Wildfire in Southeastern France