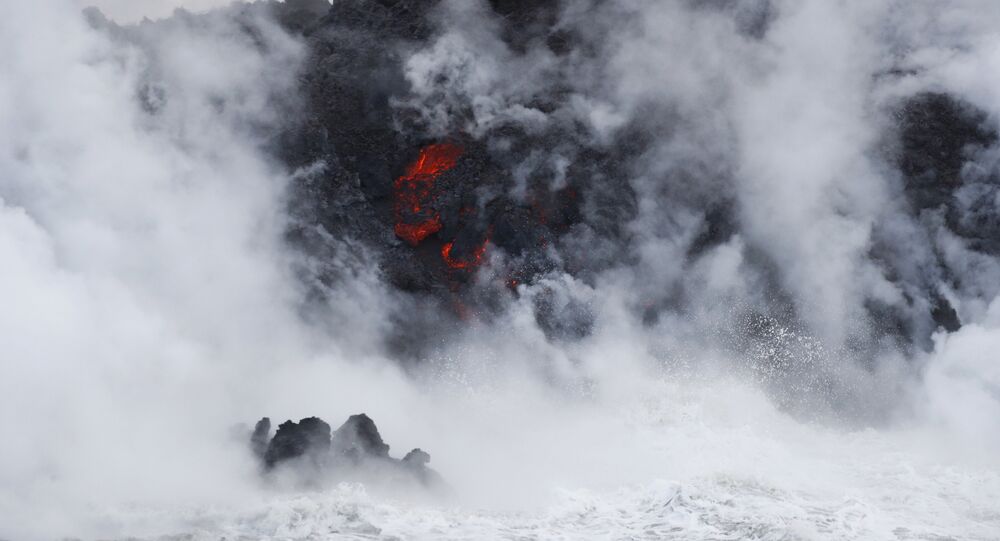 This weekend, lava poured from the Kilauea volcano on Hawaii’s Big Island into the Pacific Ocean, resulting in the production of laze, or lava haze – the potentially deadly airborne chemical plume created when molten rock sizzles sea water.

Laze is formed when hot lava comes into contact with cooler sea water. The resulting reaction generates hydrochloric acid and volcanic glass, which is produced by rapidly cooling magma, the mixture of molten volatiles and solids found beneath the surface of the Earth.

"Lava entering the ocean causes a chemical reaction and can result in small explosions, sending tiny particles of hydrochloric acid and volcanic glass in the air," Jessica Johnson, a geophysicist at the University of East Anglia in the United Kingdom, recently explained to USA Today.

According to US Geological Survey (USGS) scientist Wendy Stovall, any Hawaii residents that feel stinging on their skin should go inside because the acid in the laze plume is corrosive and can cause irritation to the skin, eyes and lungs, especially to those with asthma and emphysema. In addition, people should also strongly consider staying indoors because toxic sulfur dioxide gas spewing from various vents in volcanic fissures tripled this past weekend.

"At any time, activity may again become more explosive, increasing the intensity of ash production and producing ballistic projectiles very near the vent. Communities downwind should be prepared for ashfall as long as this activity continues," the USGS warned Sunday.

The laze could also pose a threat to mariners.

"All waterway users should be aware of the hazardous conditions associated with such an event. Getting too close to the lava can result in serious injury or death," Lt. Cmdr. John Bannon of the US Coast Guard in Honolulu said in a Sunday statement.

On Sunday, a man suffered a leg injury after he was hit by lava spatter while on his home's balcony during the Kilauea's explosive eruption.

"It hit him on the shin, and shattered everything from there down on his leg," spokeswoman for the Hawaii County Janet Snyder was quoted as saying by the HawaiiNewsNow broadcaster.

The man was reportedly hospitalized. This the first case of injury received as a result of the Kilauea eruption, which started on May 3. The volcano started shooting ash plumes last month after a series of earthquakes. Eruptions started in May after the archipelago's Big Island was shaken by two large earthquakes.

The Kilauea volcano eruption prompted the evacuation of around 10,000 people since May 3. On May 11, US President Donald Trump unlocked federal funding for Hawaii, providing both state and local authorities with federal assistance in their recovery efforts in the areas affected by the ongoing eruption.