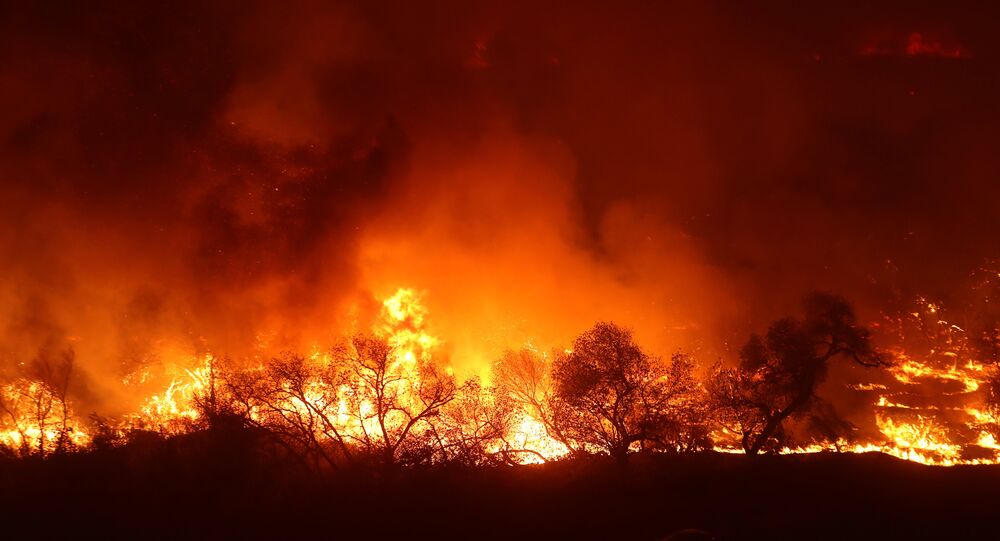 Strong winds brought more terror to residents in California's San Diego and Riverside counties as quick-moving wildfires closed in on their communities on Friday, causing thousands more to evacuate.

Burning in San Diego is the churning Lilac fire, which has consumed roughly 4,100 acres in the span of 12 hours. Already 60 percent contained is the much smaller Liberty fire, the second-newest fire to ignite, estimated to have burned a mere 300 acres in Riverside, according to Cal Fire.

​Alongside the two new fires, are the Thomas, Creek, Rye and Skirball fires to the north, which continue to rage in Los Angeles and Ventura counties.The largest continues to be the Thomas fire, which has consumed roughly 132,000 acres in Ventura County and is only about 10 percent contained.

​At the request of the Golden State's Governor, Jerry Brown, US President Donald Trump declared a state of emergency for California, allowing federal agencies to coordinate relief efforts for the smoking state.

​Though no human deaths have yet to be recorded by officials, reports of animals deaths continue to rise as an additional 25 horses were killed when flames from the Lilac fire swept through the San Luis Rey Training Center in Bonsall, the Los Angeles Times reported.

​"We tried to keep up with it, stomping on embers and using the hose, but it just started coming so fast that we just couldn't stay with it," Linda Thrash, a trainer at the establishment told the outlet. "Eventually, we just had to turn [the horses] loose. There was not time to do anything else."

"It was dark," Cliff Sise, another trainer at the center, told Fox 5 of the moment one of the horses died. "Everything was hot and she wouldn't come out… I opened the pen and tried to get behind her and get her out, and she wouldn't get out."

"She burned to death that quick," Sise added.

Horses fortunate enough to make it out alive were transported to a rescue facility at the Del Mar Fairground and Racetrack. There are currently more than 600 horses at the temporary shelter.

According to reports, the weekend will bring little relief to southern California.​

Fires are expected to weaken slightly Friday night before picking back up again Saturday. With much of the region experiencing relative humidity and wind gusts of 30 to 50 mph, officials warn the situation is not at the end point.

"We're not out of the woods yet," Dianne Jacob, chair of the San Diego County Board of Supervisors, said at a press conference. "We need to stay vigilant and be prepared."

​Combined, the six blazes have burned more than 141,000 acres and forced over 212,000 residents to evacuate from their homes.