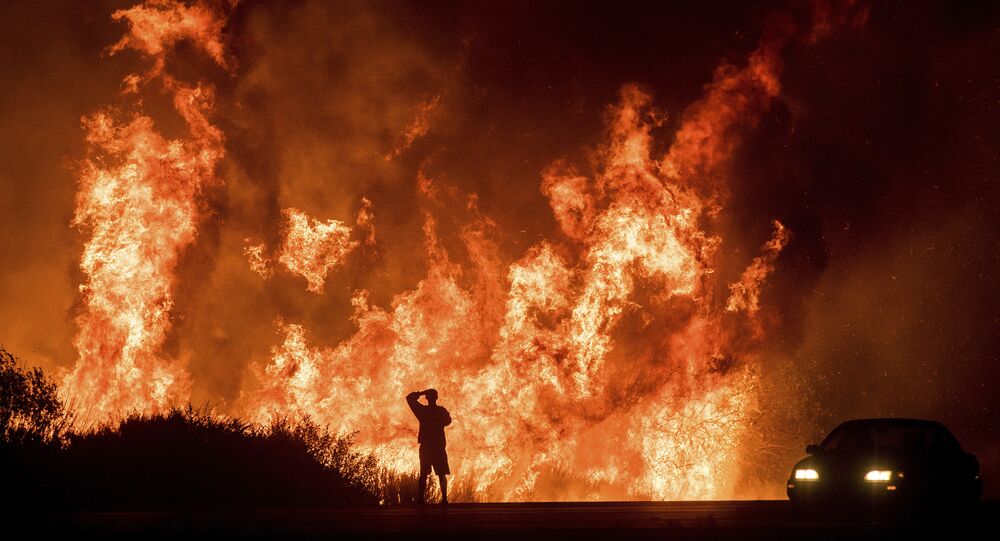 As the California fires continue to burn through neighborhoods, officials in the Golden State issued new evacuation orders Thursday in hopes of getting thousands of residents to safety.

Aided by powerful winds, the Thomas fire, which has engulfed roughly 96,000 acres, prompted officials to issue new evacuation orders for the entire Ojai Valley. The move came just moments after the fire descended on neighborhoods in Ojai, Carpinteria, Fillmore and La Conchita, the LA Times reported.

​The Thomas fire is the largest currently burning the western state, and is only 5 percent contained.

"It's definitely moving," Garo Kuredjian, captain from the Ventura County Sheriff's Office, told the outlet. "Forecasters were correct in terms of the wind forecast for tonight — it's much windier than it was yesterday."

"The heavy winds, high winds, are expected to last into Saturday, as well as the red flag conditions," Ralph Terrazas, fire chief of the Los Angeles Fire Department, said at a press conference Thursday. "Red flag is when the wind is above 25 miles per hour and the humidity is below 15 percent."

​"We're not done, we're in the middle of this thing," Terrazas added.

With that in mind, firefighters have brought in a new gadget to help spot new blazes.

​"For the first time ever we are going to launch our drones, our UAVs, that's unmanned aerial vehicle, to do property assessment," Terrazas told reporters. "The drone will fly over, locate hot spots and then we'll dispatch our firefighters to put final extinguishment in that area."

Though officials have not reported on any human deaths as of yet, there have been reports of animal deaths, including horses, according to Los Angeles Mayor Eric Garcetti.

​In recent days, several stories of residents saving animals from the encroaching inferno have popped up on social media. Footage released Wednesday shows a man along Highway 1 in Ventura County, amid the Thomas fire, rescuing a wild rabbit.

​In another instance, a horse that got stuck between two barriers was rescued by volunteers.

​"We are in the beginning of a protracted wind event," Ken Pimlott, director of Cal Fire, told AP Wednesday. "There will be no ability to fight fire in these kinds of winds."

"This is not 'watch the news and go about your day.' This is pay attention minute-by-minute… keep your head on a swivel," Pimlott added.

​Along with the Thomas fire, emergency officials are also battling fires dubbed Rye, Creek and Skirball in Los Angeles County, they currently stand at 15, 10 and 20 percent contained, respectively.

Wildfires Rage Across California as Thousands Flee to Safety (PHOTOS,VIDEOS)