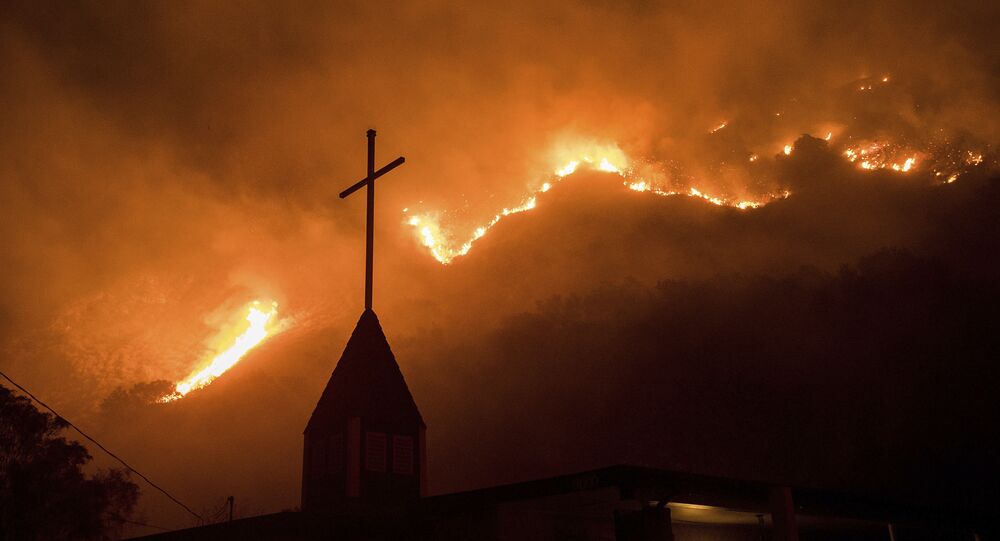 Wildfires Rage Across California as Thousands Flee to Safety (PHOTOS,VIDEOS)

As of Wednesday, in addition to the Thomas and Creek fires ravaging the Golden State, firefighters in California have also begun to battle the flames of the Skirball and Rye fires churning across parts of the city of Los Angeles itself.

According to the National Weather Service, the embers will likely continue to burn through Friday due to a combination of low humidity and surging winds, which are expected to gust at 60 miles per hour.

​In an attempt to contain the fires and prevent any injuries, the southern division of the California Highway Patrol issued an alert Wednesday that the northbound lanes of interstates 405,101 and the I-10 would be temporarily closed "for an unknown duration." However, the southbound lanes are open.

​"These are the days that break your heart," Eric Garcetti, mayor of Los Angeles said at a news conference. "These are also days that show the resilience of our city."

According to reports, more than 150 structures have been consumed by the roaring blazes — including that of 21st Century Fox and Fox News Executive Chairman Rupert Murdoch.

​The two biggest fires that officials have yet to contain are the Thomas and Creek fires, which have burned 65,000 and nearly 11,500 acres, respectively. The third largest fire is the Rye fire with 7,000 acres consumed, while the smallest of all is the Skirball fire at merely 150 acres of charred destruction in its wake.

​Though there have been no reports of any human deaths, the Los Angeles Times reported that more than 50,000 people have been evacuated from their homes in Ventura County, where the Thomas fire was thrashing its way through the area.

​While dozens of public and private schools have decided to close, the same could not be said for the University of California at Los Angeles. Students and employees at the institution, however, have been told by officials that they "should only come to campus if safely able until the situation is resolved," the New York Times reported.

​As of Tuesday, California's Governor Jerry Brown declared a state of emergency calling on residents to "stay ready and evacuate immediately if told to do so."

​An estimated 200,000 Californians are without power.