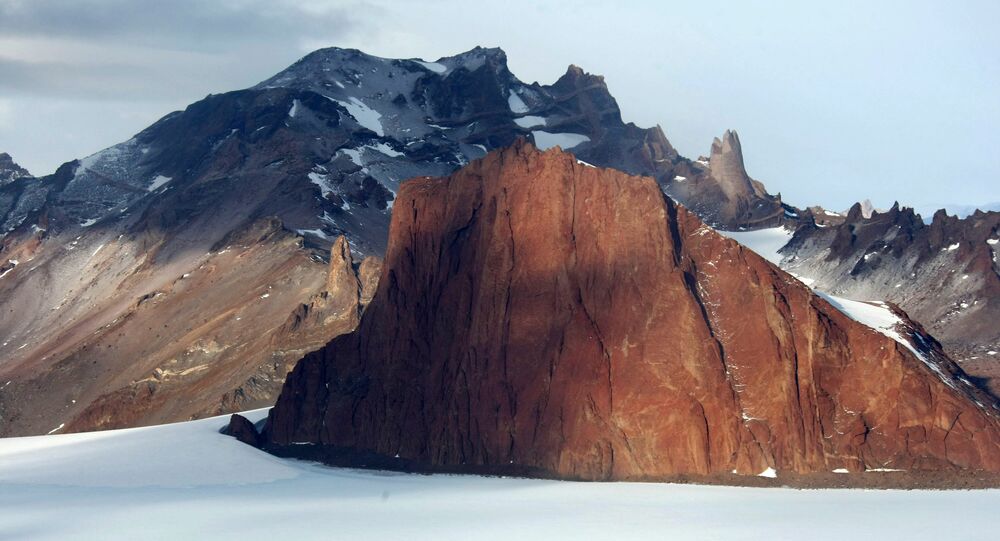 A new study has uncovered almost one hundred previously unknown volcanoes hidden under the ice in Antarctica, which puts the icy continent on par with Eastern Africa and North America, the former known to house the largest volcano grouping on the planet.

© AP Photo / John Sonntag
Just Break Already: Antarctic Ice Shelf ‘Days, Hours’ Away from Calving
Antarctica might be one of the most volcanically-active regions on Earth, as the study, performed by a team of Edinburgh University researchers, has uncovered more than 90 previously unknown volcanoes hidden below the ice, some as tall as 12,600 feet.

According to The Verge, the vulcan team analyzed a digital elevation model based on data gathered in previous surveys using ice-penetrating radars mounted on vehicles and aircraft. Scientists came up with a number of criteria to determine whether a certain geophysical structure might or might not be a volcano.

The study revealed 178 cone-shaped structures, of which 138 are likely volcanoes, and 91 of the latter group are new to geologists.

"We were amazed," said glacier expert Robert Bingham, one of the authors of the study.

"We had not expected to find anything like that number. We have almost trebled the number of volcanoes known to exist in west Antarctica," Bingham said

"We also suspect there are even more on the bed of the sea that lies under the Ross ice shelf," he added. "So that I think it is very likely this region will turn out to be the densest region of volcanoes in the world, greater even than east Africa, where mounts Nyiragongo, Kilimanjaro, Longonot and all the other active volcanoes are concentrated."

© CC0 / Piri Reis [Public domain], via Wikimedia Commons
The Mysterious Map Which Appears to Show Antarctica as Ice-Free
The newly-discovered volcanoes are buried under ice in layers up to two-and-a-half miles thick, according to the study. The peaks are reportedly concentrated in a region known as the west Antarctic rift system, which stretches over 2000 miles from Antarctica's Ross ice shelf to the Antarctic peninsula.

If any of the newly-discovered volcanoes became active, an eruption would have a dramatic effect on melting the ice.

"If one of these volcanoes were to erupt it could further destabilize west Antarctica's ice sheets," added Bingham. "Anything that causes the melting of ice — which an eruption certainly would — is likely to speed up the flow of ice into the sea.

But even without a major eruption the underground volcanic activity is expected to accelerate the melting of the ice, as happened in Iceland, according to the scientists. They are also concerned that a disappearance of the heavy miles-thick ice is likely to remove pressure from the underlying volcanos and therefore ramp up activity, further impacting the melting of the ice — something that happened in Iceland as well, according to The Verge.

"The most volcanism that is going in the world at present is in regions that have only recently lost their glacier covering — after the end of the last ice age. These places include Iceland and Alaska," Bingham stated.

However, the team is currently unable to determine whether any of the ice-covered volcanoes are active. They did, however,suggest that the uncovering of a large amount of rocky peaks would likely provide additional grip to resist ice movement. According to the team, the uneven surface "could represent some of the most influential pinning points for past and future ice retreat."