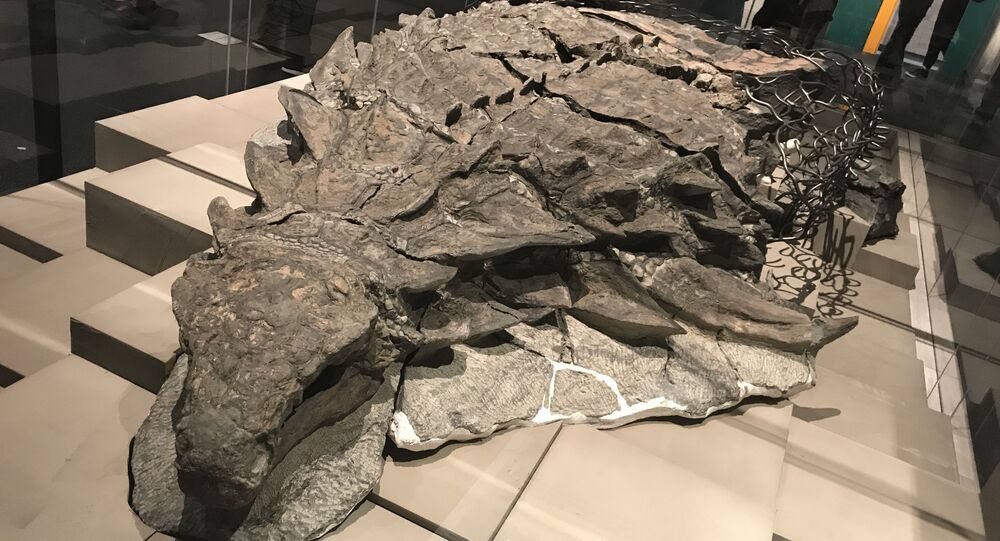 An unexpectedly well-preserved creature with fossilized skin and scales turned out to be a new kind of armored dinosaur, which actually resembles a prehistoric “walking tank.”

Unlike most discovered dinosaur specimens, which consist of skeletons or bone fragments, this one is three-dimensional and is "the best-preserved armored dinosaur ever found," as described in a fresh report in the Current Biology journal.

© CC0
Old Bones: New Dinosaur Species Unearthed on Greenland
The 110-million-year-old fossils were accidentally discovered in 2011 by mining machine operator Shawn Funk, who was working at the Suncor Millennium Mine in Alberta, eastern Canada. The dinosaur was first unveiled to the public in May 2017, but it didn't yet have an official name.

On August 3, researchers revealed the dinosaur's name and evidence of its difficult past. The nodosaur was called Borealopelta markmitchelli, after the Royal Tyrrell Museum technician, Mark Mitchell, who spent more than 7,000 hours thoroughly removing rock from around the 5.5-meter-long specimen.

"It will go down in science history as one of the most beautiful and best preserved dinosaur specimens — the Mona Lisa of dinosaurs," said lead author Caleb Brown, a scientist at the Royal Tyrrell Museum where the nodosaur is on display.

At first, museum researchers thought that the fossils belonged to a prehistoric marine creature, such as an ichthyosaur or a plesiosaur, because the specimen was covered in marine sediment.

YouTube/Sputnik
Dinosaur Discovery! 130-Million-Year-Old Reptile Remains Found in Spain
When the dinosaur died, Alberta was as warm as modern-day south Florida, and rivers and oceans likely spread much farther inland than they do now. It's unclear if the nodosaur drowned in the seaway or died on land and then got swept out to sea — either way, the corpse would have decomposed and bloated.

"It must have been a very quiet, a very muddy, fine-grained and low-oxygenated environment where it settled, because there is no scavenging on the animal," Brown said.

The nodosaur didn't land with a timid thump, either. "It must have fallen pretty rapidly, because we actually have a little impact crater from where it hit the bottom," the lead researcher explained.

Even though this plant-eater was the "dinosaur equivalent of a tank" covered in spiky, bony plates and weighing more than 1,300 kilos, scientists found the creature likely faced a significant threat from predators and protected itself from them with camouflage.

© CC BY-SA 3.0 / Alina Zienowicz
Ankylosaurus, a genus of a heavily armored dinosaur with a large club-like protrusion at the end of its tail. The nodosaur is an ancient cousin of the better-known ankylosaurus

A chemical analysis of organic compounds in the dinosaur's scales revealed that it was reddish-brown in color and was darker on its back than its belly. According to scientists, this is a shielding technique known as countershading, which is also used by many modern-day animals to blend in with the environment, indicates strong predation pressure on this large, heavily armored dinosaur.

"Strong predation on a massive, heavily armored dinosaur illustrates just how dangerous the dinosaur predators of the Cretaceous [a geologic period that spans 79 million years from the end of the Jurassic Period about 145.5 million years ago] must have been," said Brown.

The research is not over yet: scientists are still studying the dinosaur for clues about its life, including its preserved gut contents to find out what the animal ate for its last meal, and clues to its mysterious death.