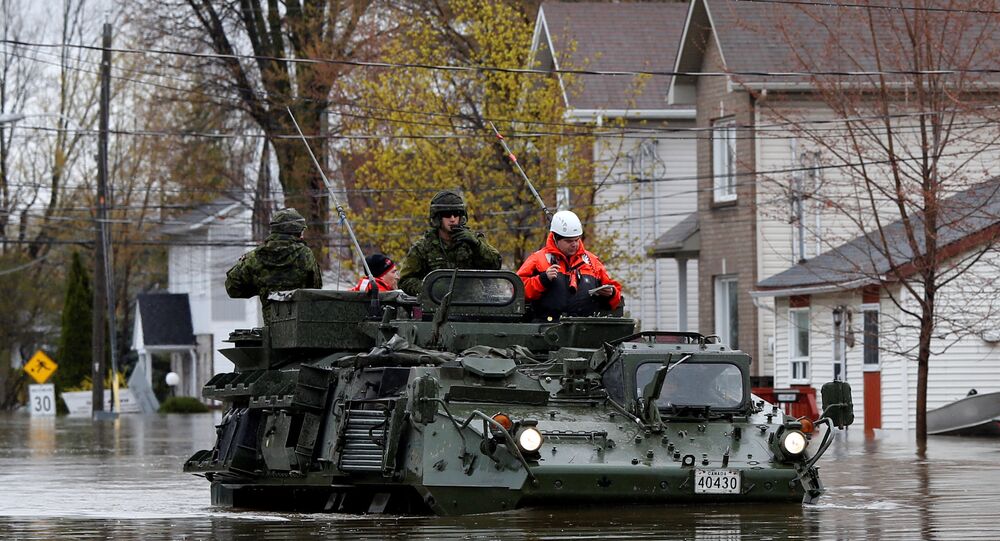 A man and his two-year-old son were swept away by heavy rains in Quebec that swelled rivers and caused the province’s worst flooding in decades.

#QuebecFloods State of emergency maintained | The situation is stable in #Ahuntsic #Cartierville | Help Center is open at YMCA Cartierville pic.twitter.com/2dxgHAC4Fl

Quebec police say that the man was driving with his wife and their son on Sunday night when the car swerved into the Riviere Sainte-Anne. The family climbed onto the top of the car to escape, but choppy waters flipped the car and sent them into the floodwater.

​The woman only escaped by grabbing a tree branch, said Sergeant Claude Doironthe to reporters. The other two were still missing as of Monday. Dozens of police officers are patrolling the riverbanks in search of the father and toddler, but the weather has made helicopter assistance impossible.

Everything you need to know about #CanadianArmedForces response to natural disasters in Canada: https://t.co/xEBc1Q1VOJ. #inondations pic.twitter.com/Nv8JZzLhEr

​Montreal, Quebec's largest city by far, has declared a state of emergency and has deployed 1,650 troops to put up flood-breaking sandbags and rescue people stranded by high waters. Nearly two and a half inches of rain has pummeled eastern Ontario and western Quebec, flooding lakes and rivers and prompting the evacuation of more than 1,500 Quebecoise in nearly 150 municipalities.

​According to Quebec Environment Minister David Heurtel, the rains are the worst to hit Quebec in 55 years. "It's clear now we're in the midst of a historic event," he said on Friday. "We're gonna get through it, as we always do. But we'll do everything together."

Current state of #QuebecFloods in multiple cities. "Take a kayak!" @CelineDion would be proud of #Canada. #inondations2017Quebec pic.twitter.com/1TVvDF8jUu

The Sanguenay River flood of 1996 saw significantly more rain and damage, with 10 deaths and nearly 16,000 evacuations. It was the largest flood in modern Canadian history, and it seems that the more recent flooding is unlikely to break that record.

Parts of HWY 50 in Gatineau are closed because of flooding #Gatineau #flood #inondations pic.twitter.com/Rf4WxAiZuT

Authorities are optimistic about water levels, according to Quebec assemblyman Martin Coiteux. "What's encouraging is that the water levels will stop climbing," he told reporters.

Best of luck to all quebecers who are living the flood. It's insane…#QuebecFloods #inondationsquebec2017 pic.twitter.com/zZRCZ9SrMC

​"It's very important to reiterate that. We are reaching maximum levels. The water levels in the flooded areas should start going down Wednesday. It may start earlier in certain sectors. But these levels are very high… so patience is required. But I know it's hard."