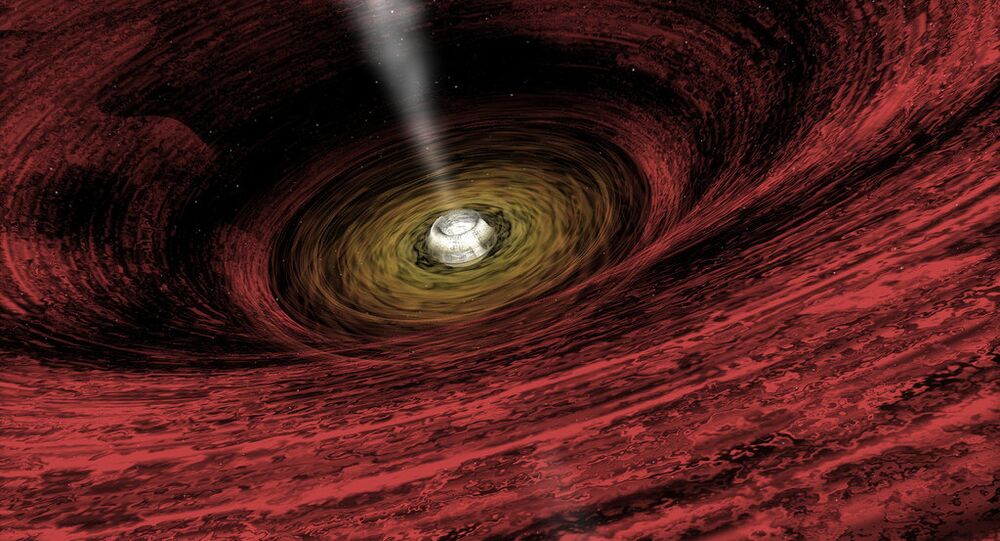 Scientists using the Atacama Large Millimeter/submillimeter Array (ALMA) in Chile have measured a black hole 660 million times as massive as our Sun.

© Flickr / UCI UC Irvine
CERN Reacts to Fears Large Hadron Collider Could Spawn 'Demonic' Black Hole
Scientists have used the Large Millimeter/submillimeter Array (ALMA) of telescopes in Chile's Atacama Desert to measure the black hole at the center of a galaxy dubbed NGC 1332, which is 73 million light years away from Earth.

They measured the size of the black hole by studying ALMA's observations of carbon monoxide emissions from a giant disc of cold gas approximately 16 light years across which is orbiting the black hole.

They also measured the speed of the gas, and found it to move at more than 500 kilometers per second near the disk's center.

The scientists then compared these data with simulations and calculated that the black hole has a mass 660 million times greater than our Sun, plus or minus ten percent, and about 150 times the mass of the black hole at the center of the Milky Way.

Previous studies of NGC 1332 with ground- and space-based telescopes gave wildly different estimates for the mass of this black hole, ranging from 500 million to 1.5 billion times the mass of the Sun.

A. Barth (UC Irvine), ALMA (NRAO/ESO/NAOJ); NASA/ESA Hubble; Carnegie-Irvine Galaxy Survey
Combined image of NGC 1332 shows the central disk of gas surrounding the supermassive black hole at the center of the galaxy
The study, published in the Astrophysical Journal Letters on Thursday, confirms that the lower estimates are more accurate.

It is the first demonstration that ALMA's 66 antennas can be used to map out the rotation of gas disks in galactic centers at a higher resolution than other ground- and space-based telescopes, including the Hubble Space Telescope.

The astronomers believe their technique can be applied to many other galaxies to measure the masses of supermassive black holes with great precision, and they have submitted a proposal to use ALMA to observe other massive black holes.

© NASA . ESA, and D. Coe, J. Anderson, and R. van der Marel
Astronomers Find Huge Black Hole in the Most Unexpected Place in Space
"The ubiquity of black holes is one indicator of the profound influence that they have on the formation of the galaxies in which they live," said Andrew J. Baker, associate professor at Rutgers University and one of the coauthors of the study.

"This has been a very active area of research for the last 20 years, trying to characterize the masses of black holes at the centers of galaxies," which scientists believe will help them to understand how galaxies form and evolve.

"This is a case where new instrumentation has allowed us to make an important new advance in terms of what we can say scientifically."