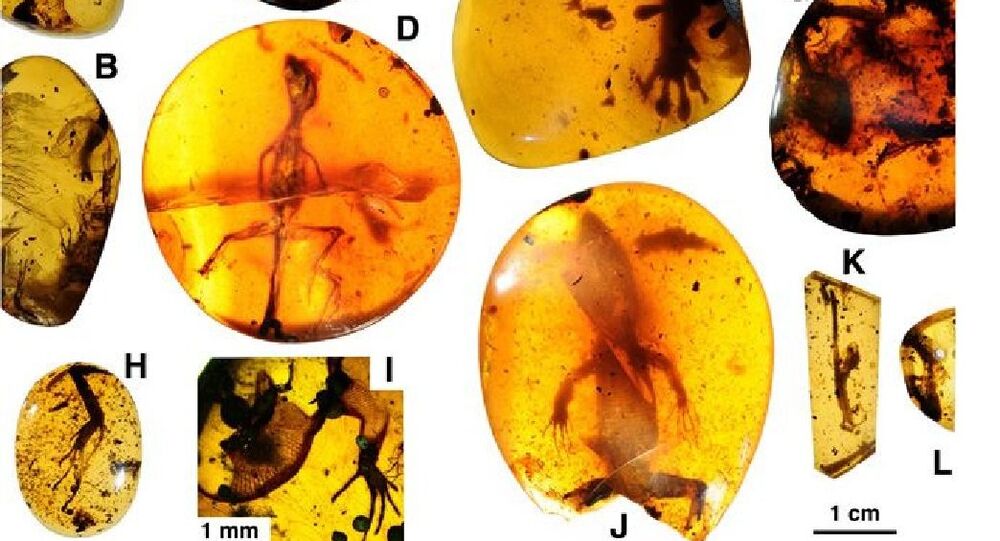 Researchers have analyzed amber fossils of lizards found in modern day Myanmar, which show the diversity of life in the tropics during the mid-Cretaceous period.

© Sputnik / Sergey Velichkin
Nazi Treasure Train: 'Finding Amber Room Would Be the Greatest' Discovery
Scientists have studied the oldest collection of lizards preserved in amber, which gives an insight into life in the tropics around 100 million years ago, during the middle Cretaceous period.

The 12 small tropical lizards, perhaps on the run from dinosaurs, got trapped in sticky tree resin and as a result became preserved in amber.

The detailed fossils are impressive in their diversity, including the ancestors of modern day geckos and chameleons, and give scientists unusual insight into the evolution of lizard species.

"If you showed me the CT scans we made, I'd say that was a species of modern gecko," Ed Stanley, co-author of the study published in Science Advances on Friday, told Live Science.

"Except when you start looking closer, you found a couple of characters that no gecko has today."

The researchers used high-resolution CT scans to analyze the lizards and create 3D models of them.

Amber preserves fossils far better than rocks, and organs and bones can be preserved for millions of years. Some of the specimens found in Myanmar have intact skin, visible skin pigment and soft tissues.

The most scientifically significant find was one tiny lizard identified as an ancestor of modern chameleons, and extends the geological age of chameleons about five times, back to the mid-Cretaceous.

"The tiny, little specimen would never have been recognizable as a very primitive and close relative of living chameleons if preserved in rock. Minute but diagnostic characters simply would not have been preserved," co-author David Grimaldi said.