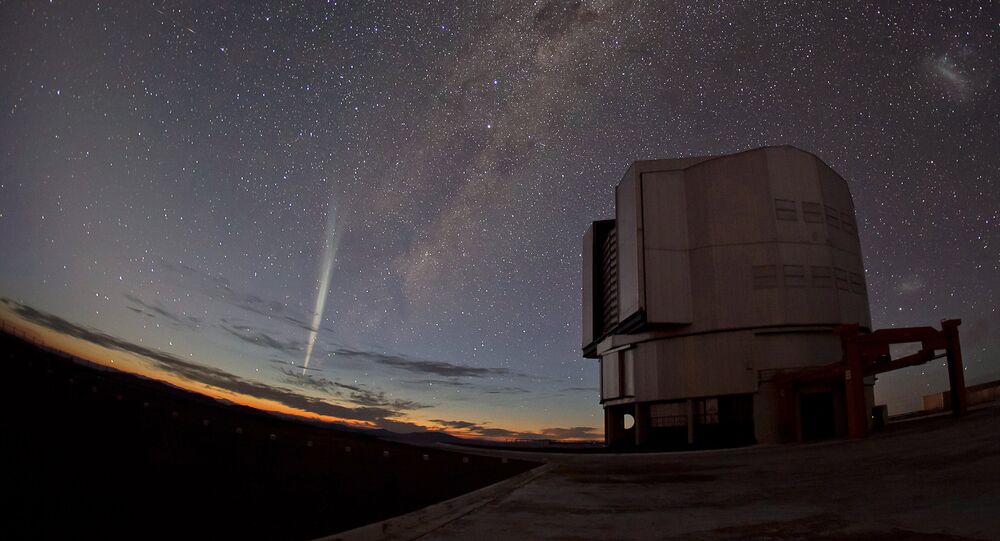 An international team of researchers has proved how rightfully comet C/2014 Q2 was nicknamed Lovejoy: while observing the atmosphere of the celestial body they found that it, among others, releases alcohol in crazy amounts: as much as 500 bottles of wine every second.

© Flickr / Kevin Gill
Astronomers Launch Search for Extraterrestrials in Potential 'Alien Megastructure'
An international team of astronomers has made a surprising discovery: the comet Lovejoy (formally catalogued as C/2014 Q2) releases alcohol as it speeds through our galaxy.

“We report the detection of 21 molecules in comet C/2014 Q2 (Lovejoy), including the first identification of ethyl alcohol (ethanol, C2H5OH) and the simplest monosaccharide sugar glycolaldehyde (CH2OHCHO) in a comet,” Nicolas Biver, a scientist of the Paris Observatory and the lead author of a paper on the discovery wrote in his article in Science Advances.

Ethanol, also commonly called ethyl alcohol, drinking alcohol, or simply alcohol is the principal type of alcohol found in alcoholic beverages, produced by the fermentation of sugars by yeasts.

The amount of the released alcohol is as much as “at least 500 bottles of wine every second during its peak activity”, Nicolas Biver  said in a press statement.

© Flickr / NASA Blueshift
A Strange New World: Planet With Comet's Tail Discovered
The scientists observed the comet in January 2015, when it was at its brightest and the most productive, using the 30-m telescope of the Institut de Radioastronomie Millimétrique (IRAM), located on Pico Veleta in the Sierra Nevada Mountains in Spain.

Apart from alcohol and sugar, the astronomers spotted 21 other organic compounds, including water, which is released at the rate of 20 tons per second.

Astronomers first spotted Lovejoy in August 2014, when it was one of the brightest and most active comets since comet Hale-Bopp in 1997, which, in turn, is said to have been the most widely observed comet of the 20th century.

“Comets are frozen remnants from the formation of our solar system. Scientists are interested in them because they are relatively pristine and therefore hold clues to how the solar system was made,” NASA explained.

© AP Photo / ESA/ATG medialab
‘Hello, Earth! I'm Awake!': Lost Robot Philae Sends Signals From Comet
“Most orbit in frigid zones far from the sun. However, occasionally, a gravitational disturbance sends a comet closer to the sun, where it heats up and releases gases, allowing scientists to determine its composition.”

"The next step is to see if the organic material being found in comets came from the primordial cloud that formed the solar system or if it was created later on, inside the protoplanetary disk that surrounded the young sun," Dominique Bockelée-Morvan from Paris Observatory, said in a statement.