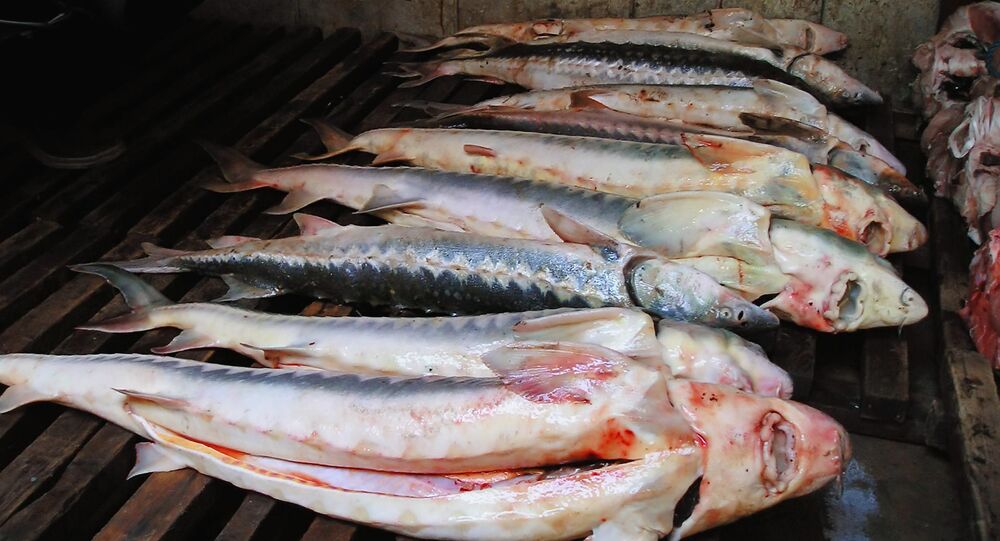 Sturgeon Dying Out Due to Lack of Cooperation Between Caspian States

The head of the resource department at the Caspian Research Institute of Fishing Industry says that ecological cooperation and the combined efforts of all the Caspian littoral states is the only way to save the sturgeon fish from total extinction.

ASTRAKHAN (Sputnik), Anastasia Levchenko — Ecological cooperation and the combined efforts of all the Caspian littoral states is the only way to save the sturgeon fish from total extinction, the head of the resource department at the Caspian Research Institute of Fishing Industry told Sputnik on Thursday.

The species of sturgeon that produces the world renowned black caviar is on the verge of extinction due to a number of environmental factors, including widespread poaching and chemical runoff into the waters it inhabits as well as oil exploration, pursued by all the five Caspian states — Russia, Kazakhstan, Turkmenistan, Azerbaijan and Iran.

"All the Caspian bordering states should be interested in preserving the sturgeon. We need a joint control mechanism of all the five states — for example, we should organize a joint survey of the Caspian Sea," Raisa Khodorevskaya, representative of the Caspian Fisheries Research Institute and leading Russian specialist on preserving sturgeon stocks, told Sputnik.

Khodorevskaya emphasized that the surgeon is a transborder fish that lives in the fresh water of rivers but comes to sea for spawning.

© RIA Novosti . Elena Visens
Ancient Chinese Sturgeon Faces Extinction: Reports
Russia "feels the responsibility to the whole world" and has been the most active in promoting the need to save the sturgeon, imposing a moratorium on commercial fishing in 2002, Khodorevskaya explained. However, other Caspian states continued commercial fishing of sturgeon up until last year. Moreover, Azerbaijan and Iran refuse to allow Russia to surveys their territorial waters of the Caspian coast, the leading researcher said.

Next year, the situation may improve as a commission between the five Caspian states is due to convene at an intergovernmental level. Since 1992, this commission, established to protect the biological resources of the Caspian Sea, has functioned only at an interdepartmental level, meaning its decisions have never been binding.

"If this commission convenes at the intergovernmental level, it will be a big step forward," Khodorevskaya said. "We need to act urgently, actually we should have started ringing alarm bells already three-five years ago," she added.

Today, more and more analysts concur that the sturgeon fish is doomed to total extinction within the next five years. Poaching, water pollution, a lack of concerted action by the Caspian states and their reluctance to sign a binding agreement imposing a moratorium on commercial fishing of this highly precious species are contributing to the unstoppable depletion of sturgeon stocks, which started after the collapse of the Soviet Union and became even more dramatic in 2005.

Raisa Khodorevskaya also noted that security standards for oil exploration should be improved by the five Caspian littoral states in order to save sturgeon from extinction, which now seems inevitable.

"There are a number of oil exploration companies [operating in the Caspian], but only one of them — LUKoil – guarantees the safety of its work. All the other companies keep silent on this topic," Khodorevskaya said.

The legal status of the Caspian Sea is a disputed issue for the five states bordering the sea due to its ample mineral and marine resources.

Russia has taken the most active stance on the protection of sturgeon; however, it will not be possible to prevent its extinction without a multilateral approach from all the states involved.

"Other states are playing for time, because as long as there are fish [in the sea], they can be caught. Lack of efficient control allows all of us to do so," Khodorevskaya said.

Unlike many other specialists, Khodorevskaya believes it is the harmful chemical pollutants in the water, and not widespread poaching, that is behind the current critical situation with sturgeon stocks.

"Usually old oil wells are badly closed, and harmful chemicals leak. The situation in the sea is worsening constantly," Khodorevskaya said during a round table on the question of sturgeon preservation in Astrakhan.

Russia introduced a moratorium on the commercial fishing of sturgeon in 2002, and other Caspian states agreed to join it last year at a summit in Astrakhan. Nevertheless, sturgeon stocks have persistently depleted since 2005.