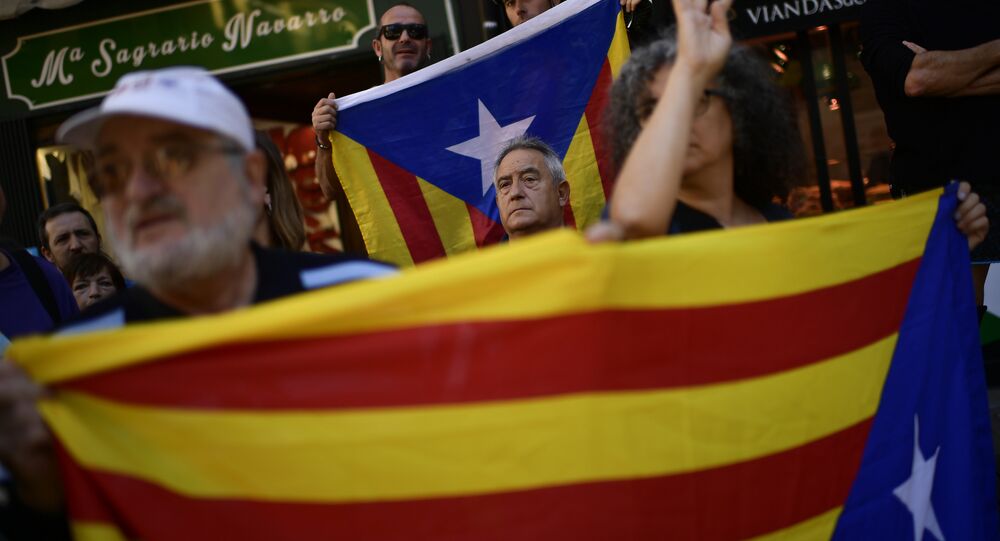 It was a typical media operation to smear Russia that was seeded by Bellingcat, the self-styled online “independent investigation” group that in reality is a front for Western intelligence agencies.

For those able to discern, there were giveaway hallmarks of lots of sensational drama and innuendo of sinister plotting by the Kremlin. But, as usual, no hard facts to back it up.

We’re talking about the alleged meddling by Russia in the Catalan referendum for independence in 2017. Moscow was accused of colluding with pro-independence campaigners to swing the vote for the region to secede from Spain. It was even alleged that Russia was preparing to invade the breakaway northern region with 10,000 troops.

Turns out though that the whole story was a hoax, as reported this week here.

Spanish state prosecutors looked into the claims and determined that there was “no factual basis” and thus dismissed the case.

Unfortunately, however, the news about the prosecution collapsing has been hushed up by Spanish and other Western media. The initial headlines blaring out about Russian meddling have left the public with the false impression that the Kremlin was interfering in yet another Western democracy.

© AP Photo / Frank Molter/dpa
Spanish Intelligence Claims Russia Attempted to Meddle in Catalan Crisis
Note how Western governments and media casually and routinely accuse Moscow of “interfering” in their politics. At the summit of the US-led NATO military alliance last week, Russia was accused over and over again of “threatening” Western security and “order”. It’s almost an article of faith to vilify Russia, despite the lack of evidence and vehement denial by Moscow of any such violation.

The Spanish spoof should be a classic case study of how Western propaganda is orchestrated to poison public perception and to justify sanctions and military aggression against Moscow.

It’s also unfortunate that the source of the disinformation is not more widely exposed. Bellingcat is a British self-declared media investigative team set up by Eliot Higgins in 2014. It is lauded with awards in the Western media as an independent crusading campaign for truth.

It was the “source” that “provided” the claims that the Kremlin was provoking Catalonia’s pro-independence movement.

Bellingcat would be better named “Smellingrat” because it is a conduit for Western intelligence propaganda. The group is funded by the American government agency, the National Endowment for Democracy (NED), which is commonly involved in promoting “color revolutions” to overthrow foreign governments that Washington dislikes. NED is banned in Russia for good reason. It is simply a more palatable name for the CIA and other US state intelligence.

So, US-funded Bellingcat has just been caught out for fabricating a ridiculous smear against Russia over Spain’s politics. It’s a huge pity that more publicity is not given to that grubby story. If more people were aware of Bellingcat’s dirty operations in laundering Western intelligence then there might be more healthy public skepticism towards other smears against Russia. Those smears are used to incite antagonism with Moscow which is what the American and British governments and other NATO members want in order to promote imperial agendas such as boosting military budgets or axing the Nord Stream 2 gas project between Russia and Europe.

© CC0
Is Bellingcat Being Played by the CIA?
A few of Bellingcat’s other “truth-telling” stories include the alleged poisonings of Alexei Navalny and Sergei Skripal; the alleged shooting down of the Malaysian airliner with a Russian Buk missile; alleged use of chemical weapons by the Syrian government allied with Russia; the alleged invasion of Ukraine by Russian forces; and the alleged sabotage of an ammunition depot in the Czech Republic by Russian undercover agents.

All of these “stories” have been greedily grabbed and flagged by Western corporate media outlets and pronounced to be “accurate” and “reliable”. Incredibly, major news organizations like the New York Times, BBC and CNN, among others, valorize Bellingcat as some noble endeavor of “civic journalism”.

The truth is we are living in a matrix of disinformation involving Western intelligence and its phalanx of media laundromats. Smellingrat is a little “indy” launderette that works with the majors like CNN and BBC.

Occasionally, the truth does break through the miasma of distortion as in the case of the alleged Russian plot to break up Spain. But that leak in the matrix is quickly plugged by media silence and blackout.

If Bellingcat was more widely seen as the peddler of anti-Russia yarns, then that would be critically damaging to the whole edifice of propaganda seeking to demonize Russia as an “evil enemy” out to “destroy Western democracy”. And we can’t have that, can we?