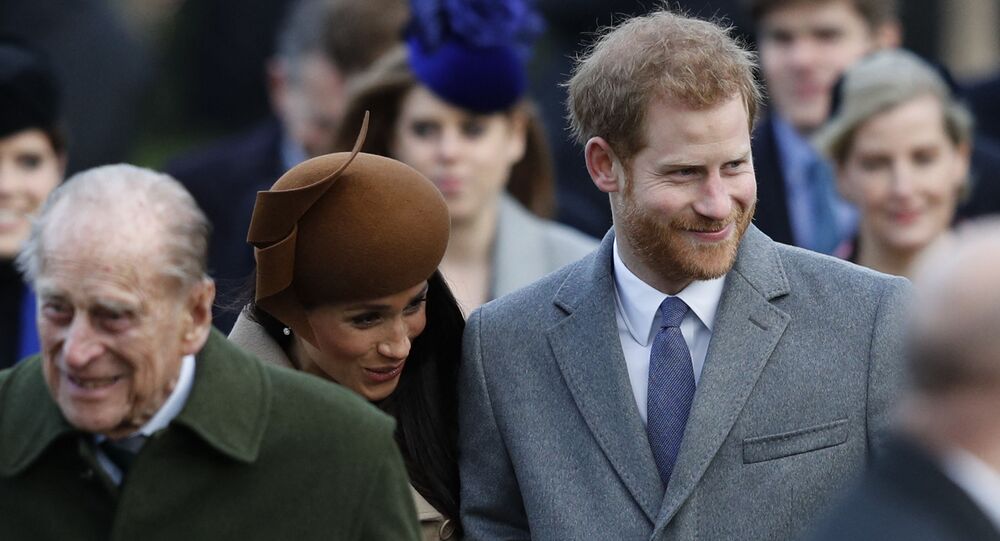 Whilst Prince Phillip is clearly very ill it would be the ultimate act of disrespect for Harry and Meghan to vent their spleen on worldwide TV this weekend.

If they do go ahead, no UK based TV company should transmit it whilst the Duke is so gravely ill.

Harry has already lost masses of respect from the British public but if he allows this interview to go ahead this weekend he will end up with zero respect.

© AFP 2021 / DAN HIMBRECHTS
Harry & Meghan's Interview With Oprah Won't Be Pulled 'Even if Philip's Health Worsens', Report Says
As we all know respect is really hard to earn. It cannot be bought or demanded, however, it can be easily lost.

Showing respect begins of course with respecting yourself and taking full responsibility for your decisions and actions. Not whining and moaning whilst demanding privacy.

However, it’s not just Harry who seems to lack any form of respect in modern Britain. I believe that lack of respect is at the core of many of our societal ills.

Look at the disgusting things that were written on Twitter and social media a couple of weeks ago when it was feared that Prince Philip had died.

There was no respect for him or his family as trolls wrote filth.

I am not calling for deference or tugging of forelocks here. It’s not about him being a royal. It’s about showing respect to a man and his family who are clearly going through hell and worrying like crazy about him.

© AFP 2021 / EDDIE MULHOLLAND
Britain's Prince Harry (L) salutes as he stands alongside his grandfather Britain's Prince Philip, Duke of Edinburgh, during their visit to the Field of Remembrance at Westminster Abbey in central London on November 10, 2016.

The same thing happened with Captain Tom who was literally trolled on his death bed, so much so that his daughter had to keep the attacks from him.

Twitter and Facebook with their business model of being a platform and not a publisher have profited from this filth. They allow people to spout their ill-informed, ill researched,  disrespectful and crude insults on their platforms whilst taking no responsibility for what’s written.

Social media has effectively allowed every complex issue to be reduced to a couple of hundred characters and often an unfunny or crude meme.

This reductive culture is coarsening and wrecking our society.

Look at the vaccination argument where many show no respect at all for scientists like Whitty, Vallance or JVT who all have brains the size of planets.

They are libelled, defamed and vilified on twitter by idiots who give equal weight to the one-dimensional arguments of some dangerous fool on YouTube.

Now with proof that the vaccine reduces the chances of hospital admission by 80 percent I wonder if these people will now hang their head in shame and begin to respect these top scientists?

The pandemic, following on so quickly from the bitter arguments of Brexit, has clearly polarised UK society. However, surely now with all the time we have on our hands, we should learn to be a bit more reflective and weigh up all the arguments before venting our spleen on social media. By the way I am not exempting myself from this criticism as I have been guilty of this too.

Of course, there’s been massive mistakes made by Boris and his team. The PPE, care homes, dither and delay and the failure to close our borders have to be given a forensic examination in a full public inquiry into Covid sooner rather than later. However, at this moment it is also vital that we all play our part, get vaccinated and follow the rules.

Accepting the vaccine is both an act of duty and respect towards your fellow citizens, it is not an act of submission. As I said in previous columns, no man is an island.

Freedom of Speech is Not About Spewing Bile and Hatred

Of course, we should all be free to criticise and question those in authority. However, it has to be a reasoned argument, not 280 characters of bile and hatred based on a half-baked idea expressed on the internet by someone wearing purple who used to play in goal for my beloved Coventry City!

I also know it’s hard to show any form of respect to our MP’s after the expenses scandal and the latest revelation about Angela Rayner buying 2 pairs of Apple ear pods on Covid expenses at £249 a pop or Matt Hancock claiming for a slightly cheaper pair at £159. Clearly Hancock and Rayner are as tone death to public opinion as Hazz and Meg!

However, just because these people are disrespecting us, the voters, that is not a reason for us to join in, is it?

Obviously, woke and cancel culture is the epitome of this reductive and simplistic virus in our society.

The fact that someone can lose their job, career and reputation for holding one well worked out and reasoned argument which enrages the Twitter mob is dangerous, really dangerous.

Free speech is under attack and we must fight back. This should not be an excuse for rampant sexism, homophobia or racism but there has to be more of an appreciation that there is always more than one side to any debate.

We must respect the other view if it is well thought out and reasoned and not just 280 characters of pure misspelt bile.