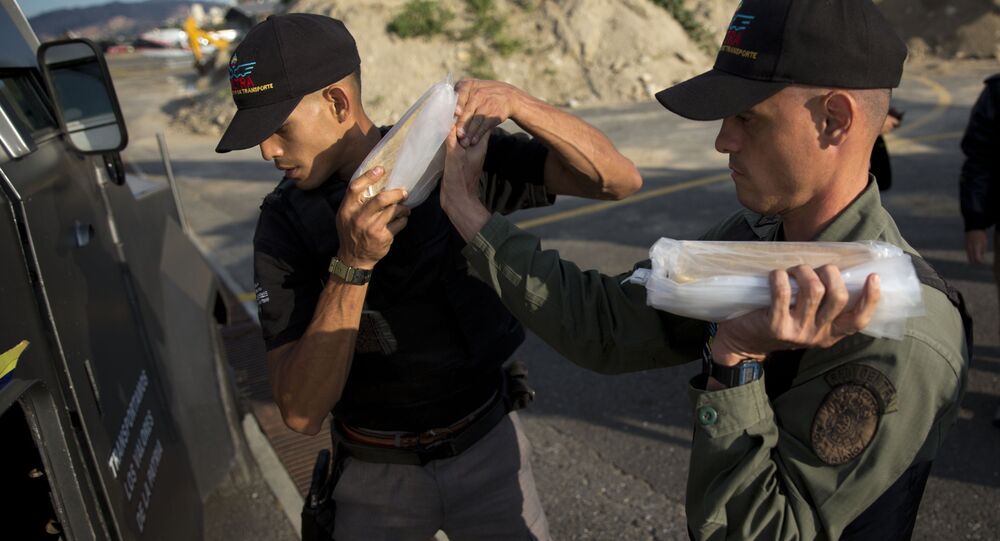 “Bank robbery is an initiative of amateurs. True professionals establish a bank”.

The wise words of socialist poet and playwright Bertold Brecht should be copied, promoted and shouted across the world in the light of yesterday’s shocking decision of Supreme Court Judge Nigel Teare in London to uphold the obscene and deadly decision of the Bank of England to rob the nation of Venezuela of its £820 million of gold assets.

In a decision bereft of democratic accountability Britain’s High Court has demonstrated clearly that law is not a question of justice but merely politics by another means. Venezuela is already struggling with the consequences of a cruel and illegal programme of economic sanctions imposed by the United States which has claimed the lives of tens of thousands of men, women and children for want of essential medicines and necessary foodstuffs; but now in the midst of the Covid-19 Pandemic, they are being prevented from access to their own gold reserves to pay for vital medical supplies and equipment to fight the virus.

The High Court Judge listened to legal counsel for the Bank of England defend their decision to prevent Venezuela access to their own gold reserves because they have accepted the British Government decision of last year to recognise a US appointed opposition member of the Venezuelan National Assembly, Juan Guaido, who didn’t even stand in the Presidential election of 2018 and has never stood in a Presidential election as the legitimate President of Venezuela. It is a ridiculous and unbelievable situation more befitting a poor B-Movie script than real life politics.

Imperialist Piracy, Robbery and Pillage is Alive and Kicking

This is a modern-day exercise in imperialist piracy. In mainstream media circles talk of imperialism, colonialism and actual robbery and pillage of sovereign nations and their natural wealth and resources is frowned upon as language and practices of the past. The rulers of the world do not like anyone talking about imperialism because they are too busy practicing it.

The economic terrorism of the United States, backed up by obedient poodles like the UK, is every bit as deadly, destructive, and devastating as suicide bombers and guided missiles. Read the Report of the United Nations Rapporteur who was tasked with an analysis of US sanctions and blockades imposed on Venezuela by Donald Trump and the US.

These economic sanctions were ratcheted up and tightened by Trump but have no international legitimacy whatsoever. The United Nations (UN) has condemned them as contrary to international law and therefore illegal. They have been called ‘economic warfare’.

Thorough academic research has estimated that these sanctions have led directly to the loss of 40,000 lives, including thousands of children, in the last 18 months alone.

According to the UN Rapporteur UN Human Rights Council Report in 2017 and 2018 the United States has used the illegal sanctions and financial blockades against Venezuela to create a humanitarian crisis and are therefore criminally liable for the increased deaths of children and the infirm denied vital medical supplies directly because of the sanctions.

Economic Sanctions Are Terrorism in Another Form

The damning report stated categorically that the US sanctions kill and therefore America should face prosecution at the International Criminal Court for crimes against humanity.

Alfred de Zayas, author of the Report and a UN Human Rights Rapporteur, complained last year that although he has written 13 separate Reports on humanitarian disasters and crisis across the world including Sudan, Somalia and Palestine and all were reported and used by the international media, his Report on Venezuela has been ignored and not one single mainstream channel has interviewed him about it reflecting the fact the mainstream media are content to create and swim in ‘an ocean of lies’ when it comes to reporting on Venezuela.

That ocean of lies analogy is reflected in the loyal ruling class lapdog the BBC in their world service online report of the High Court decision:

“Nicolás Maduro was re-elected to a second six-year term in May 2018 in highly controversial elections, which most opposition parties boycotted”.

No mention of the independent and respected Carter Center which was formed by the former US President Jimmy Carter to observe elections across the world in respect of openness and fairness which said of Venezuela:

"Of the 92 elections that we've monitored, I would say that the election process in Venezuela is the best in the world".

No mention of the fact Nicolas Maduro became the elected President of Venezuela because he won 6.2 million of the 9.3 million votes cast in 2018 representing a turnout of 46% of the country’s registered voters despite a high profile and well financed campaign of the rich right wing elite in Venezuela urging a complete boycott of the election.

© REUTERS / Manaure Quintero
UK Unequivocally Recognises Guaido as President of Venezuela in Legal Battle for Gold
The right-wing opposition boycott resulted in less voters participating than in recent elections, yet Nicolas Maduro’s votes represent 31% of the registered voters of Venezuela. That is the exact percentage of the vote Barack Obama was elected on in 2008. No one suggested Obama was democratically illegitimate.

The percentage turnout of registered voters in the US Presidential elections of 1996 and 2000 was 49% and 50% respectively without a well organised and financed boycott campaign. I do not recall the BBC World Service suggesting Bill Clinton was an illegitimate President because half or less of the electorate used their votes in the elections which he won.

“More than 50 countries recognised Mr Guaidó as the legitimate president, among them the UK. But President Maduro, who retained the support of China and Russia among others, argued that he was the constitutional president and would remain so”.

No mention of the fact that the “support of China and Russia among others” actually amounts to the support of 120 other nations, more than twice the number who recognise the US appointed puppet. The Non-Aligned Movement (NAM) summit which took place in Caracas, Venezuela, on July 20/21st brought together 120 member nations as well as seven observer countries, ten multilateral international organisations including the United Nations (UN), and fourteen specially invited nations.

At that summit Nicolas Maduro said: “The construction of a world without hegemonic empires, a world of peace, of respect for international law, is neither an odyssey nor an unrealistic utopia…”

Words that explain why the likes of the US and UK are so vehemently opposed to him and are prepared to abuse international laws and impose terrible and illegal economic sanctions to try and engineer his removal from office.

The decision of the High Court yesterday was yet another blow for the respect of international law and the sovereignty of nations. It is an unjust and partisan decision reflecting the weight of imperialist domination by the US in our world, not legal or moral rectitude. It will be appealed in the Supreme Court but will likely be upheld unless the appointed judges surprise us all and decide to stand up for the rights of nations to choose their own governments, free from outside influences and pressure, and the even-handed application of international laws and treaties which declare respect for national sovereignty.

© AP Photo / Ariana Cubillos
Caracas Bashes UK Court for Seeking 'to Strip Venezuela of Its International Gold Reserves'
Nicolas Maduro is not opposed and despised by the US and UK because of alleged electoral irregularities but because he stands for a different social and world order to the obscenely unfair one, they both uphold and promote.

Alfred de Zayas is right to condemn the economic sanctions as not just illegal under international law but also immoral as they are solely responsible for increased child mortality, maternal mortality, and deaths due to shortages of life-saving insulin. His words speak truth to power in his crusade against the mainstream ocean of lies in respect of Venezuela: