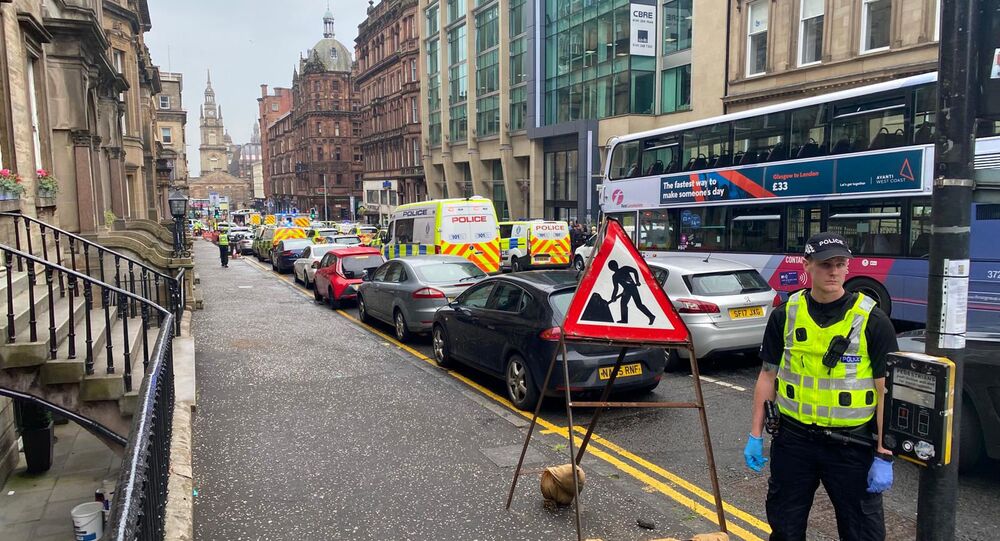 The modern addiction to 24-hour news lends itself to the shoddy, sensationalist and unreliable reporting which surrounded the dreadful incident which occurred in Glasgow yesterday afternoon.

Around 12.50 Police Scotland received a distressing call about a stabbing incident inside a city centre hotel. Within a matter of minutes unarmed police officers were on the scene closely followed by armed officers minutes later. Several people had been allegedly attacked with a knife or other sharp object and sadly a police officer in attendance received life threatening wounds. The assailant was located within a room and subsequently shot dead. The exact circumstances of the whole affair will rightly be subjected to detailed analysis in the coming days.

Last night in Glasgow five men aged 17,18, 20, 38 and 53 were detained in hospital with assault wounds the extent of which we are yet unaware. The 43-year-old male police officer had injuries which led to his condition being described as critical but stable. Fortunately he now appears to be improving. I am sure all of Glasgow and people hearing of the incident across the world will wish the officer and the other victims all the best.

The Police Scotland official statement confirmed no other individual is being pursued in connection with the incident and that the area surrounding the hotel is safe. That statement was issued around 6pm last night. If only the main news agencies like BBC and SKY had bothered to wait until then instead of giving fuel to fire up hours of ill-informed nonsense.

BBC and SKY News Guilty of Shoddy and Unreliable Reporting

From around 2pm yesterday I flipped between BBC and SKY to be informed that three people plus an attacker had been killed in Glasgow City Centre.

It was being treated as a ‘terrorist’ incident as the hotel where the attack took place housed asylum seekers. Alleged ‘eye-witnesses’ were given carte-blanche on live bulletins to talk about men dying on the street with stab wounds and this being ‘another’ terrorist incident like the one last week in Reading.

The ticker tape and on the scene correspondents were adamant. First three people had been killed and the assailant was also shot. Four fatalities were being reported. Then there was a slight roll back. The assailant was amongst the three dead. So, two people plus the assailant died. Eye-witness testimonies were then allowed to inform the world.

One such testimony which was played over and over before being radically cut by the 6pm bulletins was of a Mathew Nisbett who said:

“For two of these incidents (terrorist-related) to happen in one week in the UK is horrifying … it’s upsetting and eh … it makes you wonder what is wrong with these people to do such a thing”.

And there you have the tempting but toxic effect of allowing what one ill-informed individual has to say leading your so-called ‘news’ output. He also referred to “police defunding” campaigns which have never been made in Glasgow or Scotland, and the reference was therefore entirely inappropriate.

There was no ‘terrorist’ incident. Police Scotland explicitly ruled out any terrorist connection. The police in Reading designated the horrific attack by one deranged man in a public park last week as a terrorist incident but in Glasgow, one individual attacked other individuals with a knife and injured six people, one of them a police officer.

He was subsequently shot dead. No other individual was killed, thankfully. What was a multiple murder lead story from 2pm on all the mainstream media had become a several people injured story and a single assailant shot dead story by 6.05pm. Those who testified to men dead on the street were wrong. The ticker tape reports of four fatalities were wrong. The speculation and premature labelling of the incident as ‘terror related’ was wrong.

Information Not Speculation and Biased Opinions is What News Is About

What a salient lesson for us all to be a bit more patient and sensible in relation to such incidents and for so-called respectable news outlets to concentrate more on informing the public than providing fans to flame ill-informed comment and speculation.

Make no mistake what happened in Glasgow yesterday afternoon was awful. Primarily for the targets of the assailants’ violent rage and the police officer who was attacked in his line of duty. But also, for the passers-by who witnessed blood-soaked victims seek refuge from the attacker on the streets outside the hotel. Our thoughts and best wishes must be with all the victims.

However, what is not acceptable is the irresponsible output which ensued in the hours between the initial reporting and the Police Scotland statement at teatime. Serious incidents demand serious journalism and broadcasting not free reign for sensationalist and value laden comments and opinions.

Nigel Farage could not resist the opportunity to issue a Tweet designed to stir anti-asylum seeker sentiment in relation to the incident:

All over the UK, hotels are filling up with young men who are coming across the Channel every day.

It is a massive risk to our wellbeing — yet the government does nothing.

​True to his consistent record of ignorant, ill-informed, and deliberately divisive comments throughout his career Farage tweeted without knowing the facts of the incident at 4.17pm but did not bother to mention the injured police officer or wish him well. That is because all he cares about in his rich privileged existence living off his gold-plated European Union pension is stirring up anti-immigrant and anti-refugee hatred.

The hotel did not house “illegal immigrants”, it housed asylum seekers. Human beings fleeing war torn, famine ravaged and often Western bombed nations. Those seeking asylum in Scotland or the UK are not here in pursuit of state benefits, they are here fleeing state bombs. Study the pattern of those seeking refuge within the UK and you will discover the nations our governments have chosen to bomb and blast to smithereens in the name of oil and better relations with our United States puppet-master.

Those who have sought asylum in the UK from Iraq, Afghanistan, Libya, Syria, Yemen and scores of other nations thousands of miles away have not risked life and limb for the joys of a small council house and a social security cheque; they are here because our government’s military actions have destroyed their homes and livelihoods.

Farage and other lowlife individuals will always seek to use human tragedies like today’s incident to sow division and resentment against refugees and asylum seekers. But Scotland is a country built on refugees and asylum seekers. We were aptly described by the brilliant Glasgow author, William McIlvanney, as a ‘mongrel’ nation. Made up from Irish, Italian, Indian, Pakistani, Polish, Chinese and many other immigrants.

Living in Scotland is what makes you Scottish. A hand of friendship not a fist of fury is what should be extended to those who seek to come here to live, work and raise their families. The weak and bitter among us succumb to the simplistic slogans of the racists. The ‘our’ jobs, ‘our’ homes, ‘our’ health service brigade. Wilfully blind to the rich contribution refugees have always made to our society. The solution to job scarcity, housing shortages and greater demand on health services is the creation of more jobs, the building of more houses and the expansion of health services.

We should always strive to rise above the human frailties of intolerance and ignorance. Try to walk in the shoes worn by others before rushing to criticise or condemn them. Ask yourself how you would cope in their situation. Imagine you and your family are the refugees and challenge yourself to treat others as you yourself would hope to be treated.

© Sputnik / Jason Dunn
Glasgow Attacker Was Allegedly Sudanese National Who Threatened to Stab People, Reports Say
Yesterday’s horrific attack in Glasgow was about an individual human being losing the plot and lashing out violently against others. His actions were met with the ultimate punishment. Thankfully, others did not lose their lives but to seek to use one man’s actions to sully the name of all asylum seekers and refugees is rancid, rotten, and reprehensible. I would rather have ten thousand “coming across the Channel every day” to live in Scotland than one Nigel Farage. Earlier this month two police officers were rushed to hospital after an horrific machete attack in Wishaw, Lanarkshire. It did not attract the same high profile coverage and certainly didn’t lead to accusations that people from Wishaw are thugs. We must always be careful not to generalise and tar people with a brush only appropriate for the tiny minority.

If people seriously want to reduce the number of asylum seekers and refugees across the world then they should stop voting for politicians who choose to bomb and destroy other countries to feed the demands of the armaments industry and serve the geo-political interests of America and its insatiable desire for power.