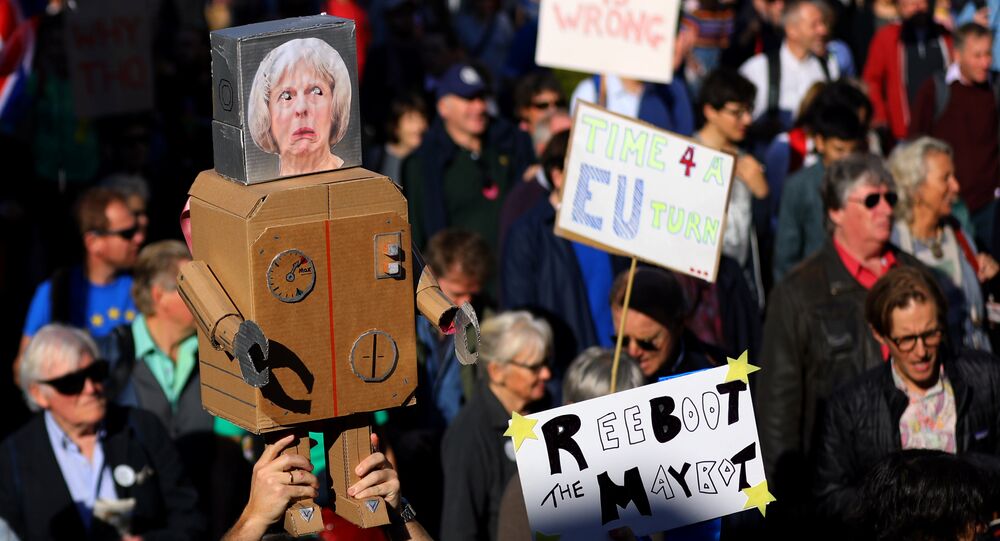 British Prime Minister Theresa May has repeatedly urged that the "national interest" is at stake over her Brexit plan. She is calling for businesses and politicians to rally around safeguarding ordinary people's jobs and livelihoods - and to back her draft divorce deal with the European Union. A parliamentary vote is due in the coming weeks.

However, the timing of a shocking report on British poverty by the United Nations makes May's appeals rather hollow, and it sounds an alarm about the dire direction the country is headed.

Professor Philip Alston, the UN Special Rapporteur, spent two weeks visiting diverse communities across Britain, and his report on growing poverty makes a damning case against the economic policies of present and past Conservative governments.

© CC0
London's Knife Crime Epidemic 'Public Health Issue' - Study
One-fifth of the British population — or 14 million people — are living in poverty, according to the UN report. The miserable social conditions for communities has become particularly worse since 2010 under two successive Conservative governments.

What's more, the report concludes that poverty in Britain is likely to become even more acute and widespread following the country's departure from the European Union. While the deadline for divorce is at the end of March next year — only four months away — Britain is facing years of economic uncertainty in its transition out of the bloc, during which period the impact will be hardest on low-income people, according to the UN study.

Another factor is that Britain will no longer receive social development funds from the EU which had helped mitigate deprivation in many marginalized communities. Those who advocate for Brexit often complain that British taxpayers' money is funneled to Brussels as part of its membership of the bloc. They claim that after Britain quits the EU, then these funds will be available for spending on British public services.

Such logic is questionable in light of the UN poverty report. Prof Alston's investigation found that social deprivation in Britain has been compounded by "mean-spirited" and "callous" government policies which have prioritized economic austerity cutbacks over public welfare.

So, if successive British governments have not shown much care towards poor people over the past eight years, out of a dubious ideological conviction, then why would they suddenly adopt a caring attitude in a post-Brexit period?

Much more realistic is the expectation that as Britain undergoes wrenching changes to its economy over Brexit, the callous attitude of the political establishment will ensure that the disadvantaged become even more disadvantaged in order to pay for the costs of transition.

Admittedly, if a Labour government were to come to power in the next few years, then social policies could be more humane and progressive to improve the conditions for ordinary workers and their families, the unemployed, pensioners and those requiring long-term health care. But that's speculative. It might not happen.

What we can say for now is that the present government under Theresa May is making an insulting appeal that her Brexit plan is in the national interest. Whatever about the consequences for the rich elite, May's Brexit plan is certainly not in the interest of low-income Britons and the burgeoning ranks of the poor.

© AP Photo / Tim Ireland
Million Mask March London Plan to Show 'Contempt' for 'Those Who Govern us'
It is true that many working-class Britons voted for Brexit in the June 2016 referendum. But did they envisage what the consequences would entail? They were also sold a lot of false promises by the likes of Boris Johnson and other British toffs who fantasize about rejuvenating Rule Britannia Empire.

The UN report notes that Britain is the fifth richest economy in the world. Yet it has one of the highest rates of poverty among so-called developed nations. That's dysfunctional capitalism for you.

Since Conservative governments embarked on an ironclad policy of economic austerity, over the past eight years some £39 billion ($50 billion) has been axed from public welfare and services. Those cuts have directly impacted communities and social conditions turning cities, towns, villages and housing estates into depressed zones of blighted lives for millions of people. The UN report found record numbers of Britons subsisting by going to food banks and other charitable centers in order to get their next meal. That is even the case for people who have jobs, such is the rampant poverty-in-work culture across Britain.

Record numbers of people are living rough on the streets. Some have resorted to prostitution just to buy food. Or joined criminal gangs as a way to survive. Charles Dickens would have lots to write about if he were still alive.

A damning figure is this: the $50 billion that Conservative governments have cut in public spending over eight years is comparable to what Britain spends every year on its military budget.

The only way that Brexit would be in the national interest is if the country somehow acquires a government that is truly democratic and committed to social justice. A government that is courageous and willing to challenge the abysmal gap between rich and poor, to embark on social and economic policies that prioritize the needs of workers and ordinary people, not the rich elite.

The record of the British establishment shows that it has negligible concern for the working people of Britain, and is only dedicated to enriching the oligarchy and fueling its war machine for aggression against foreign "enemies" like Russia.

Under prevailing British politics, one thing is sure. Brexit means Brokexit — more hardship and poverty for the people of Britain.